$46.8-Million Research Facility To Be Built In St. John's, Newfoundland

Newfoundland's Premier Brian Peckford has announced that the National Research Council of Canada has given final approval for the construction in St. John's of a $46.8-million marine research institute that will accelerate the Province's promising offshore oil potential.

Calling the institute "a world class establishment," Mr. Peckford said that the center "would lend invaluable impetus to Canada's highly advanced ice operations technology," and predicted that it would become "the world's premier research and development center in the field of marine dynamics and Arctic testing." The institute, which will be owned and operated by the National Research Council of Canada, will carry out an intensive effort to improve the design of i c e b r e a k i n g craft and offshore structures, thus assuring their safe and efficient operation in icecovered waters.

The facility is slated for completion by 1982-83, and will be located on the campus of Memorial University in St. John's.

Among its features will be an 80-meter-long towing tank for experiments simulating Arctic saltwater environments, a companion clear-water tank 200 meters long for testing hydrodynamic forces on larger model structures, and a 31-meter by 75-meter stability tank for the study of graduated wave impacts.

It will also aid those of the Centre for Cold Ocean Resources Engineering (C-CORE), and of the N e w f o u n d l a n d Oceans Research and Development Corporation (NORDCO).

C-CORE was created by Memorial University in 1975 to conduct research facilitating the safe and economical development of Atlantic offshore resources. Now functioning in the private domain, its facilities at Memorial include environmental and heavy-structure testing laboratories, a materials- behavior analysis installation, and a wave-generator-equipped, 200-foot vessel model testing tank.

Unlike C-CORE, NORDCO operates in the private sector. A "Crown Corporation" founded by t h e P r o v i n c i a l Government in 1975, NORDCO carries out research and development programs for both industry and governments geared toward developing Arctic and cold-water operations technology.

Leo D. Barry, Newfoundland's Minister of Industrial Development, said that the new center could be expected to contribute to the overall economic strength of the Province by drawing private high-technology firms, which tend to locate in areas where R&D expertise is available. 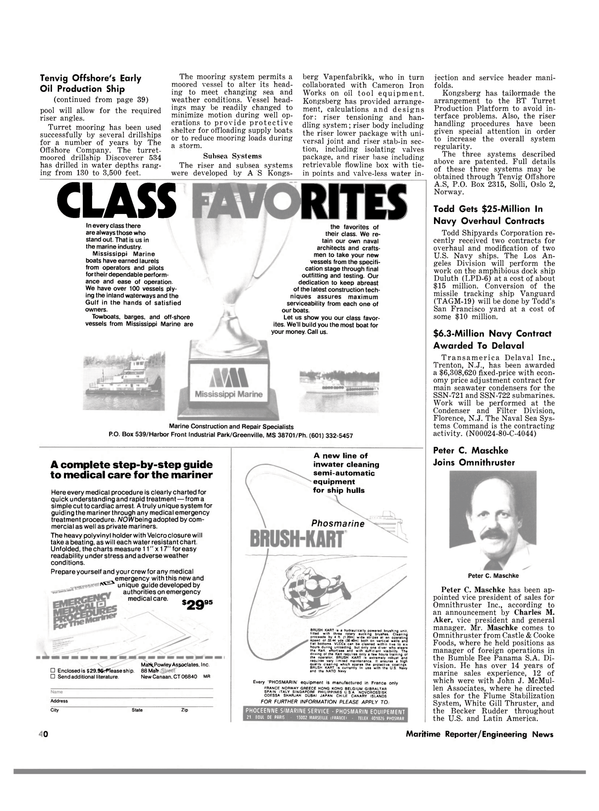 Read $46.8-Million Research Facility To Be Built In St. John's, Newfoundland in Pdf, Flash or Html5 edition of May 1980 Maritime Reporter