The Shipbuilding Market In The USA

During most of the 20th century there has been a debate in the United States about the operation of and the need for shipping and shipbuilding. The debate was interrupted by two world wars and has been intensified during the past 30 years.

During the same period, the political and economic interdependence of nations has been growing. The exchange of materials, foodstuffs and manufactures is becoming more and more imperative. In spite of technological advances, the bulk of this exchange moves by sea and will continue to do so in the foreseeable future.

Against this background, it is important to examine the U.S. shipyard, its product, its market and the conditions under which it works. It is the authors' thesis that: 1. Shipbuilding is a very complex operation, demanding a wide range of sophisticated knowledge, in design, production and management; 2. The technology of construction is complex because of the great number and diversity of materials, components and processes even though shipyards do not manufacture the high-technology components; 3. Ship and shipbuilding technology have changed greatly since World War II and the changes are continuing; 4. During that time there have been significant increases in shipyard productivity; 5. Both the international and U.S. shipbuilding markets are largely government controlled; 6. This is caused by the economic and military mission of the ship; 7. As a result, the shipyards' operating conditions are basically different from other industries; 8. Many of these conditions are worldwide, but some are different and more restrictive in the United States; 9. This accounts for the special characteristics of the operation of U.S. shipyards, and 10. Productivity and cost comparisons are not meaningful unless the differences in conditions and operating practices are recognized and evaluated.

The merchant and military vessels built by major U.S. shipyards are identified in Tables 1 and 2.

The U.S. shipbuilding industry has built and continues to build a variety of merchant and military vessels. The numbers of vessels built in the different decades have not varied greatly. For merchant construction, however, the types of vessels have changed dramatically. The passenger and breakbulk cargo vessels are no longer built, other vessel types having replaced them, such as container, roll-on/roll-off, barge carrier and liquefied natural gas ships. Naval vessels have experienced changes within classes rather than changes in basic mission.

Commercial Market The shipbuilding market differs from the markets for other industries in that the product can be built, maintained and operated anywhere, regardless of its origin or ownership, without causing a significant additional cost or any additional cost at all. The potential competition is, therefore, worldwide.

The product — the ship — has a vital part in supplying its country's economic needs, and in case of war in helping maintain its defense. Almost without exception, therefore, governments intervene in shipping and shipbuilding to help their domestic industries and to protect broader national interests.

However, the cost of foreign labor has been rising in each country's currency. When this cost increase is combined with the decreasing value of the dollar against foreign currencies, the opportunities for foreign sales may develop in the 1980s when the international demand for ships firms up. To illustrate how labor rates compared in 1977, Table 3 summarizes the average net earnings of all wage earners less all government deductions, not including fringes other than family allowances, and converted to U.S.

At the 1979 exchange rates, the cost of labor for Japanese and West German as well as Swedish shipyards would be greater than in American yards. U.S. costs are higher due to ship design and shipyard operating requirements by at least $5 to $6 million and quite possibly more.

The world shipbuilding market is a mix of international economy, price competition and politics. The overriding factor is government support and control. Government policy is becoming increasingly important each year. In foreign countries ship prices are often completely determined by the need to support national industry, create jobs, reduce unemployment payments and earn hard currency. In the United States, government support is primarily limited by law to highly visible direct subsidy support to the shipyards and shipowners.

In the United States, ship prices are determined in the long run by adding a profit to the estimated cost which will yield a return on the shipyard's invested capital equal to or greater than other alternative investment opportunities to the shipyard owner.

This market environment with its many swings in the balance between supply and demand of ships and heavy influence of international politics and government policy has created a very cyclical market. This is illustrated by Figure 1, showing the total number of ships contracted to be built in the United States each year.

A review of Figure 1 shows that the total market in ships over 1,000 gross tons contracted for, net of cancellations, varied from highs of 76, 57 and 48 in 1951, 1956 and 1972 to lows of 3, 7 and 8 in 1953, 1954 and 1969, respectively. The long-term five-year moving average has been about 20 ships/year. Within the total market the three basic markets varied even more, showing the danger of specializing in one market. The total market has a fairly regular average cycle period of between five and six years, although there is no one type of economic phenomenon which controls this timing.

Numbers of ships are not a totally accurate measure of shipbuilding sales activity because ships vary so much in size and type.

Figure 2 illustrates how commercial ship sales dollars have varied between 1955 and 1978. In addition to total sales each year, the value of sales at 1978 constant dollars is also plotted. These 1978 constant dollars were determined by weighting the Material Index for Steel Vessels and the Bureau of Labor Statistics Selected U.S. Shipyard Labor Index by the proportion of material and labor plus overhead in ships. No matter what measure is used, they all demonstrate that the shipbuilding business is very cyclical and has a regular cycle period of between five and six years.

In addition to the cyclical nature of the U.S. shipbuilding market, the steady production of ships in a single yard has been rare.

With the general exception of the Bethlehem Steel 28,000/29,000-dwt tanker series and the LASH ships built at Avondale, production runs of commercial ships have been limited to a dozen at most and often as small as one, two, or three ships.

The second-to-last item to discuss in the commercial U.S. shipbuilding market is the method of contracting for new ships. Several procurement methods have been used.

In the 1950s the owner usually negotiated with the shipyard to buy a ship designed by the yard. This was usually done in the foreign sales market and was often used to buy Jones Act ships.

Formal advertised bidding by several shipyards on a set of contract plans and specifications prepared by the owner's naval architect under close government supervision was used by the Mar Ad for the general-cargo ship fleet replacement and modernization program started in the late 1950s, and continued until the 1970 Merchant Marine Act. A provision in this act wisely allowed shipyards to prepare and market designs for subsidized ships.

Nearly all contracts placed in the 1970s have been by negotiated procurement, using either shipyard- or owner-prepared contract designs.

In this way, both the shipyard and the owner gain a better understanding of the contract provisions and the shipbuilding process applied to the ship being negotiated.

The final point, which should be emphasized, is that the existence of the U.S. commercial shipbuilding industry in the past has depended on the existence and implementation of a national maritime policy. Government aid in some major foreign shipbuilding centers has increased in recent years. In Great Britain and Sweden, it has been carried to the point of nationalization or government ownership of controlling blocks of stock.

This intervention by governments domi- nates the market. Effective operation in this market requires a clear understanding of the national maritime policy. In the United States the policy is represented by the Merchant Marine Act of 1936 as amended in 1970, the 1916 Shipping Act, The Jones Act f o r Domestic Ships, the Public Law 664 which provides government-impelled cargo preference, and other legislation. In the absence of clear policy direction and implementation of responsive maritime laws by all the Government departments involved, the United States does not have an effective maritime policy at this time.

Various new provisions are being proposed by the maritime industry, including bilateral trade agreements or other cargo-sharing agreements, tax incentives, and less restriction on the operations of U.S. ships in worldwide and domestic trading. In terms of planning and organizing the industry's operations, reasonable foreknowledge of the Government's position is almost more important than the exact form which the assistance may take.

Most major U.S. yards have maintained a naval shipbuilding capability to support their workforce during periods of low demand for commercial ships. In fact many U.S. yards rely heavily on the military shipbuilding market. About 70 percent of the dollar value of major U.S. shipbuilding is naval construction.

Like the commercial shipbuilding market, the U.S. military shipbuilding market has been cyclical. However, the cycles are long— about 12 years. Figures 3 and 4 show a fairly steady buildup from 1955 to 1966 in both the number of ships contracted with the military services and the dollar sales, if year-to-year fluctuations are smoothed. This buildup peaked with the destroyer escort and landing-ship procurements which were packaged into large lot sizes in 1964 and 1966. Contracting activity dropped to an average of about 10 ships per year during the 1967 through 1973 time period. The new high of orders after 1966 was f o r 25 military ships in 1978, caused primarily by fellowship procurements of nine FFG7 Class frigates plus four DD993 Class destroyers and four medium-endurance cutters f o r the Coast Guard.

Looking forward to anticipated awards for military ships through 1984, based on the Navy Fiscal Year 1980 Five Year Plan, the industry will see a drop in the number of ships to be awarded f r om the 1978 high to an average of 13 Navy ships plus whatever USCG cutters, Army dredges and other ships may be awarded during the time period.

A review of Figure 4 shows that over the 24-year period f r om 1955 to 1978, the Navy market averaged about $1.4 billion per year in shipyard sales. These sales are measured in 1978 constant dollars. The sales trend in 1978 constant dollars is slightly up, at the rate of about $20 million more dollars each year, over the 24-year period. Actual final billings f o r Navy ships have been and will be greater than shown in Figure 4 due to the escalation recovery of inflationary cost increases and normal change-order growth.

In summary, the large variety of market segments and commercial and naval ship types combined with the limited number of units in a production run and rapidly changing ship procurement methods makes U.S.

Investing in specialized facilities for efficient construction of one type of ship does not offer the same benefits in the United States as abroad. Diversification in several shipbuilding market segments appears to lead to a more stable operation, although unit costs will be higher and construction time longer than in a shipyard organized to concentrate on one type of ship. 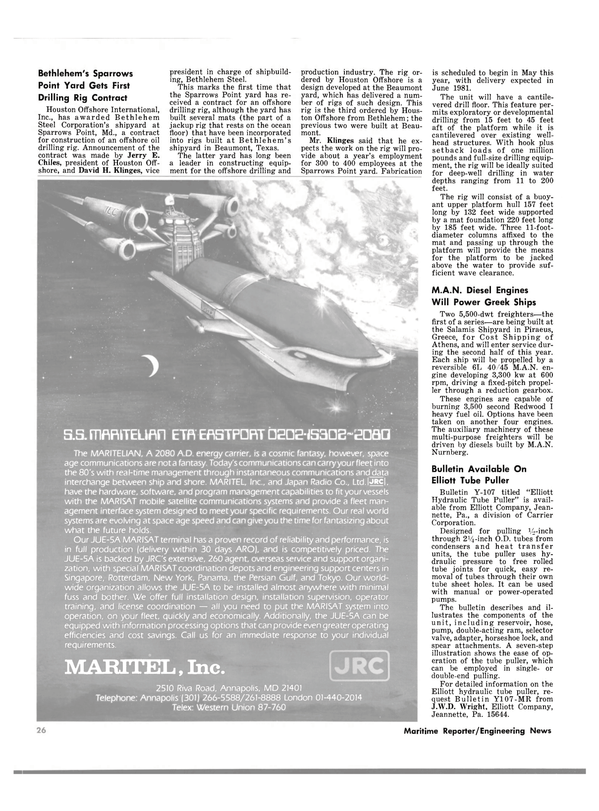 Read The Shipbuilding Market In The USA in Pdf, Flash or Html5 edition of May 1980 Maritime Reporter