An entirely new concept in offshore oil production facility, called the BTMM Production and Storage Ship, has been designed and developed by Tenvig Offshore A.S (Tenvig) of Oslo, Norway. The fully developed design of the ship and its systems was performed by Tenvig in cooperation with A/S Kongsberg Vapenfabrikk (KV).

The project's most outstanding feature, in addition to its storage capability, is the possibility of permitting early on-stream production at a modest investment.

The planning and conversion period (ready for tie-in) is estimated to be 20 to 30 months after the decision is made to proceed.

Also, the completion time is dependent on the characteristics of the oilfield. Estimates prepared by the designers indicate that such a project has the potential to reduce the general production costs.

The concept involves using a ship, either new or converted, up to the VLCC size as a floating production facility. The main advantages in using such a ship are: large storage capacity, large deck p a y l o a d c a p a c i t y , ample deck space for equipment, gas and water injection capacity, easy to maintain and dock if necessary, and low conversion/building costs.

The converted ship, or new, will be fitted with the BTMM Ship Stabilizing System, giving it motion characteristics comparable to a semisubmersible structure — a necessity for using ships as floating production facilities in the North Sea as well as under other conditions. This system and the newly developed BT Turret Production Platform, together with KV's multibore riser system, have made this project possible. The turret-table mooring allows the ship to always choose the optimum heading against the prevailing wave trains.

In designing the ship and its systems, North Sea weather conditions were used as a reference.

Tests by the designers and calculations have indicated high regularity and working time.

Whether an existing ship is converted or a new ship is especially designed for this purpose will have a minor effect on the overall technical concept. Converting a modern tanker does not create classification problems, and when converted it will be able to remain on location during the lifetime of the field without docking, p r o v i d e d proper protection, inspection and maintenance are arranged.

Preliminary Quality Assurances have been given by classification societies. Should docking be necessary, however, then it is a relatively easy job to disconnect the ship, pull the riser and proceed to a shipyard.

It is considered that the BTMM P r o d u c t i o n and Storage Ship's main application will be on medium and marginal fields as well as for deep-water fields. The feasibility study and projects executed have been based on a 100,- 000-dwt tanker—a size which can accommodate a peak production of up to 100,000 barrels of oil per day and will provide a storage capacity of about 500,000 barrels.

The design may easily be adapted to a larger tanker if increased capacities are desirable. For this purpose a larger turret production platform for three risers has been considered.

The proposed production systems o n b o a r d will be of wellknown designs, and will be provided to the client's specifications.

All the high-pressure parts of the processing system are located inside the turret production platform.

Additional l o w - p r e s s u re processing facilities and storage are on the main deck and in the cargo tanks. The p i p e l i n e for transferring oil is connected either to a loading buoy or to a pipeline where this is possible.

Off-loading also may take place from a boom at the stern of the ship.

Various s a f e t y a s p e c t s have been considered in the design.

Some of t h e s e c o n s i d e r a t i o ns were: the distance between the living quarters and the hazardous area; location of living quarters in order to reduce heat transference, and a water-sprayed blast and fire wall. An anchor quickrelease system combined with the emergency-generator-driven bowthrusters enable the ship to move away from a danger zone.

The submerged adjustable stabilizing pontoons, Figure 1, fore and aft have the capability of tying up huge oscillating water masses at a level in the sea where the energy is low. Besides, there is a time lag between the wave forces acting on the hull and on the pontoons, resulting in considerable dampening of the ship's motions and accelerations.

This Tenvig system has been thoroughly model tested and highly s o p h i s t i c a t e d computer programs imperative for the complex calculations and design of the pontoons and their exact positioning were d e v e l o p e d in cooperation with Franlab Marine (the French Petroleum Institute). Aukra Bruk A.S participated in the detailed design of the vertical movement and locking system.

Tenvig is presently preparing a full-scale test of the system. The test is expected to be carried out in the North Sea with a 500 to 600-foot vessel.

Production Platform The BT Turret Production Platform is octagonal in shape and is placed on top of a central turret table mooring. It comprises two or more decks on which all highpressure processes are arranged, i.e., first stage separation as well as gas and water injections. Consequently, all transfers between the stationary turret and the rotating ship are arranged via flexible hoses under low pressure.

In addition to the production facilities, the turret also carries a constant tension mooring system for eight piled anchors, the riser tensioners and the riser handling crane and equipment. A moon pool in the center of the turret is arranged to house the riser. The diameter of the moon pool will allow for the required riser angles.

Turret mooring has been used successfully by several drillships for a number of years by The Offshore Company. The turretmoored drillship Discoverer 534 has drilled in water depths ranging from 130 to 3,500 feet.

The mooring system permits a moored vessel to alter its heading to meet changing sea and weather conditions. Vessel headings may be readily changed to minimize motion during well operations to p r o v i d e p r o t e c t i ve shelter for offloading supply boats or to reduce mooring loads during a storm.

Subsea Systems The riser and subsea systems were developed by A S Kongsberg Vapenfabrikk, who in turn collaborated with Cameron Iron Works on oil tool equipment.

Kongsberg has tailormade the arrangement to the BT Turret Production Platform to avoid interface problems. Also, the riser handling procedures have been given special attention in order to increase the overall system regularity.

The three systems described above are patented. Full details of these three systems may be obtained through Tenvig Offshore A.S, P.O. Box 2315, Solli, Oslo 2, Norway. 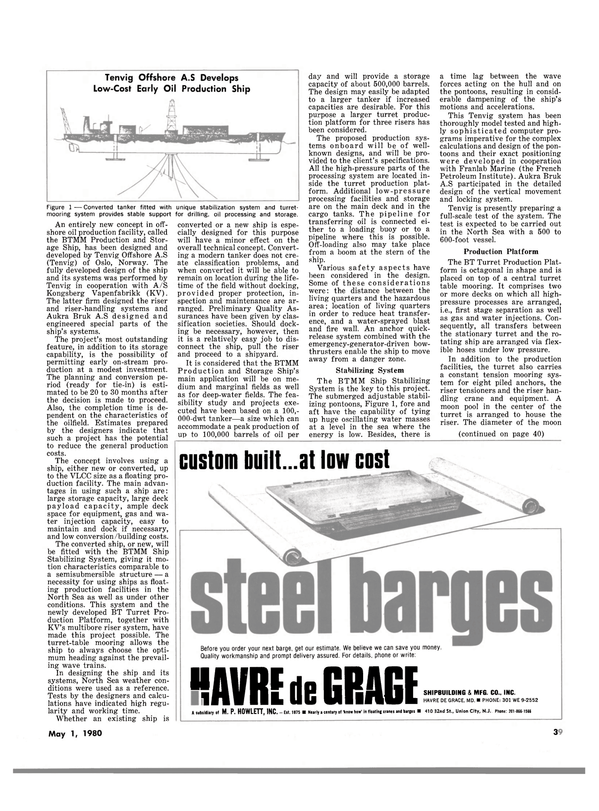