Improved marine safety and economy are being achieved with a new communication tool called the Vessel Monitoring System, according to the system's manufacturer, the Advanced Products Division of Magnavox, Torrance, Calif.

Designed for use with an MX 111 Shipboard Marisat Terminal, the VMS automatically transmits current data from virtually any sensor aboard to any designated telex station in the world at preselected intervals. The ship's home office can thus be provided an automatic running record of the vessel's position, engine room data, cargo, or weather conditions without adding to the duties of ship's personnel.

In operation, the system automatically dials the d e s i g n a t ed telex number via Marisat satellite at the preselected time, verifies the answer-back, transmits the interfaced sensor's current reading, re-verifies the connections, and then disconnects.

The VMS is expected to be particularly valuable as a watchdog over cargo sensors on LNG and other hazardous cargo carriers, and in e m e r g e n c y situations.

From a ship in distress, it can supply position data automatically as frequently as every 16 minutes.

Tied into an engine room monitor such as Decca Isis, it can serve as an early warning alert to potential engine trouble.

In addition to its regular transmissions, n o n s c h e d u l e d reports can be initiated at any time by the shipboard operator or by a coded command from the receiving station. The transmission interval can also be changed by either operator. 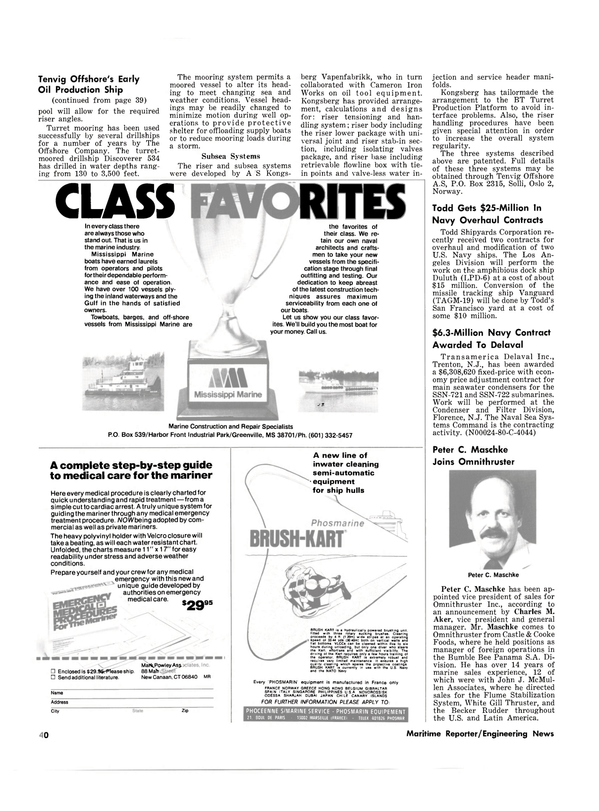