The GPS/NAVSTAR (Global Positioning System/NAVigation System with Timing and Ranging) system is a completely new system that will use 18 satellites to pinpoint the threedimensional position and speed of any object in the air, on the land or on the sea, anyplace in the world in real time with great accuracy. The system, now being developed in the USA, can use seven satellites, now in orbit. This allows the measurement of positions for about three to five hours a day. Twenty-four-hour service will be available throughout the world in about 1987.

According to Japan Radio Co. president Koji Matsui, the GPS receiver prototype was completed in June 1982, passing a series of careful tests in Japan. Since then, the design has been refined to make the product more compact and more suitable for users in the general aviation, marine shipping and automobile circles. Evaluation testing proved to be entirely satisfactory.

The GPS navigator is said to be one of the most compact, lightweight navigators in the world. Other features are: One-Channel Receiving by Unique Time- Sharing—Since the GPS navigator receives radio signals from four satellites to measure a position, four or five receiving channels would normally be required. However, the unique timesharing system JRC has developed allows the receiver to receive the signals from all four satellites on a single channel for instant position fixing.

Navigator with Various Functions—This GPS receiver determines not only latitude, longitude, elevation, speed and bearing—the basic functions— but it can also indicate such navigational data in memory as destination, bearing and distance to destination, required time to it, offcourse alarm, and so forth.

Many Options—Many powerful optional units, such as a color plotter for color track display, a hard-copy printer for printout of various data, and a remote display unit for displaying the navigational data in a remote place can be connected to the GPS navigator.

The JRC ODARS has been developed to meet the recent demand for automated data communications through the INMARSAT system from ship to shore. The ODARS is an automatic data reporting system to collect various types of onboard data and to automatically transmit the newest data to the shipowner's office on shore through the INMARSAT telex link.

The GSC-80 consists of a multi-data interface (MDI) and a telex channel interface (TCI) which are connected to an existing or new INMARSAT ship earth station.

The GSC-80 can provide data transmissions to shore in the following three modes: (1) Fully automatic data transmission on a time schedule (up to six times per day) without intervention by the operators on the ship and at the shipowner's office.

The onboard data received at the shore office is analyzed and processed to send a relevant sailing plan to the ship.

For further literature containing full information on the JLR-4000 GPS Navigator and the GSC-80 ODARS from Japan Radio, Circle 70 on Reader Service Card 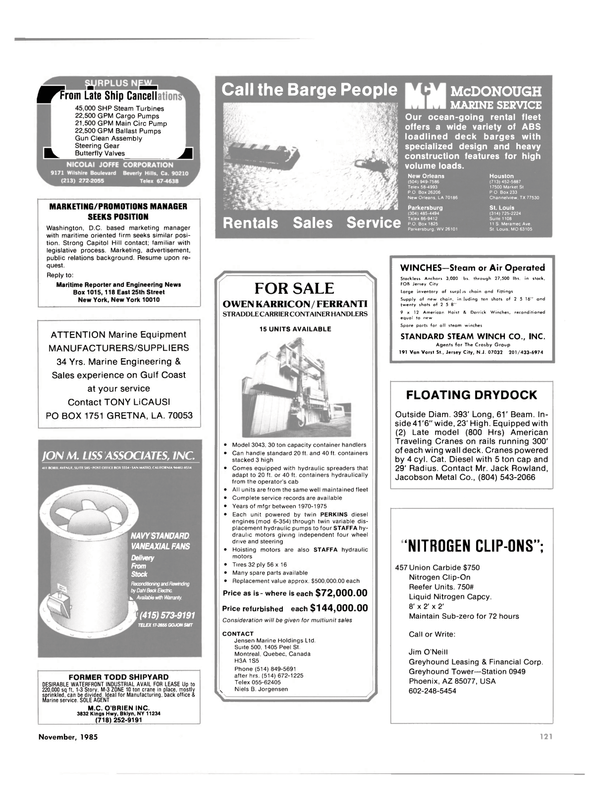