At a recent all-day governmentindustry forum sponsored by the Marine Machinery Association (MMA), representatives of 52 companies engaged in a spirited exchange of views and information with U.S. Navy officials. In 12 presentations, both groups presented positions on the theme, "Maintaining Quality in Acquisition," and each speaker faced searching questions from a totally involved audience.

At the meeting, held in Crystal City, Va., more than 100 representatives of the Navy and its suppliers had, as one observer described, "the most useful give-andtake session we've ever had with the Navy." Daniel Marangiello of ORI, Inc., MMA executive director, opened the forum, explaining that MMA is a nonprofit trade association dedicated to serving the Navy by promoting ethics in business by both industry and the government, and to insuring quality products and services for the fleet. The Association represents the full spectrum of the marine industry, from hull, mechanical, and electrical to electronics, computer, and combat weapons systems. The principal thrust of MMA is assisting both government and industry in better understanding each other's goals, objectives, problems, and restraints.

Standing in for MMA president Jack Flannigan of Terry Corpo- ration, who was unable to attend because of illness, was Jack Janetatos, MMA's founding president, who recounted the Association's history from its roots as a dozen-member discussion group several years ago to ten times that number at the meeting.

Mr. Marangiello contrasted the public perception of contractors as scoundrels and the military as incompetent with the reality. He looked back on a long career in government to observe that the government people, in the main, are "honest, loyal, dedicated, and hard working." He observed as well that industry, for the most part, was providing equipment of good quality at fair prices.

William Tarbell of NAVSEA, Deputy Commander for Acquisition and Logistics, described Defense Secretary Weinberger's 10-point program for improving DoD spare parts procurement practices. NAVSEA's efforts, the spare parts improvement program (SPIP), is an active program continually being defined and expanded. Primarily focused on full-scale breakout reviews under the direction of life cycle manager engineers, this program, he said, factors all technical requirements into these reviews that contribute to the set dollar competition goal for each inventory control point. Where lack of technical data precludes coding an item for competitive procurement, the navy will determine whether to procure the data from the manufacturer or pursue reverse engineering. DoD is directing a pilot program to more aggressively attack reverse engineering.

He also pointed out that the Navy, at the direction of the competition advocate, is actively challenging restrictive rights.

They also spoke of several different and separate Navies—the competition advocate, the legal advisor, the purchasing activity, the technical authority, and the user—all seemingly marching to different drummers.

During the luncheon, Vice Adm.

He clearly and strongly intends that NAVSEA be responsible and responsive to the Fleet's needs and interests. NAVSEA is the technical expert of the Navy, and as such will assume full responsibility and authority in this area. To this end, he has appointed Rear Adm. James Webber as the Chief Engineer of the Navy, reporting directly to him.

Colleen A. Preston, Counsel, Subcommittee on Investigations, House Committee on Armed Services, explained the concerns of the Congress that precipitate legislation.

Congress, she said, understood what caused the absurdly high prices of certain common items. She felt that perhaps some changes in accounting procedures and proration of charges would do much to preclude the excessive costs of these items. However, she recalled that even as far back as Congressman Herbert and his committee report, Congress has been telling DoD to clean up its act.

S t e v e Quatannens, MMA's General Counsel, described current thinking and legislation on rights in data both in Congress and DoD. He responded to many questions from the audience who expressed concern over the reversal of roles in that the burden of providing clear and convincing proof is borne by industry whenever the government challenges those rights, even if those rights have been in existence for 20 years or more. Much discussion ensued over the difficulty of proving one's case when files, correspondence, and agreements are more than 20 years old and no longer available.

Tom Muller, vice president of Leslie Co., opened a discussion on reverse engineering. There are, he said, several kinds of reverse engineering; the one currently in question is the replication of someone else's product. This, he believes, is tantamount to stealing, and raises serious ethical questions. Reverse engineering, he pointed out, is an extremely difficult job that cannot be done by other than those highly skilled in the specific technical area of that particular item. That skill is not available in government nor the vast majority of engineering firms.

He also voiced skepticism that any savings would result if all efforts are honestly accounted for.

Brown advised that reverse engineering can be done but only on the entire machine and not on its components.

To attempt to backfit reverse- engineered components is fraught with danger, as knowledge of configuration does not exist within the Navy, and clearances and tolerances could be unascertainable so as not to permit satisfactory operation.

He, too, indicated overall cost savings would be nil for the backfit installations with no one responsible for quality control.

Capt. William Jarett, SC, USN, manager of NAVSEA's Industrial Material Improvement Program, told the audience that although very new on the job, he intended to continue Captain Allnut's efforts in this area. He introduced Dick Ul- rich of Puget Sound Naval Shipyard, whom he said he would rely on for continuity and expertise in this program. He also said he needed the help of MMA and the industry to carry out his responsibilities.

Mr. Janetatos ended the formal presentations by voicing concern that no one is held responsible for material procurement errors, that the stock system contains certain bad parts, and that procurement errors are repeated often.

Mr. Marangiello, in closing the meeting, noted the active interest and lively discussion on the topics of the meeting. Each item discussed could have been the subject of an all-day meeting itself from the audience participation that followed each speaker's presentation. Only time forced a close of debate on each subject, but presenters and attendees continued their discussions during the breaks, during the luncheon, and during the social hour that concluded the forum.

Mr. Marangiello pointed out the purpose of the forum was to provide an opportunity to air thoughts and feelings. The forum itself was not a problem-solving vehicle because of the large number of issues presented. However, the Marine Machinery Association has already begun preliminary discussions to hold a series of smaller executive committee type workshops between industry and the Navy to solve specific individual problems. The MMA will work with Navy officials and industry in forming these effective working groups. Mr. Marangiello stated that no one firm or organization is doing what the MMA is doing. The MMA does not take the place of marketing, sales, enginerring, or contract people. It does not represent any one firm or any one segment of the industry. It complements these people and their efforts.

Together, he said, industry and the Navy can make a difference, can restore order, and solve problems to give the Navy a better product and suppliers a better Navy business.

Every firm should become a member of the Association either as a regular, supplier, or associate member.

The Marine Machinery Association, he repeated, is comprised solely of the industry. Industry must bring its experience, knowledge, skill, and integrity to the attention of the Navy and Congress.

The exact dates, format, and agenda will be announced at a later date. 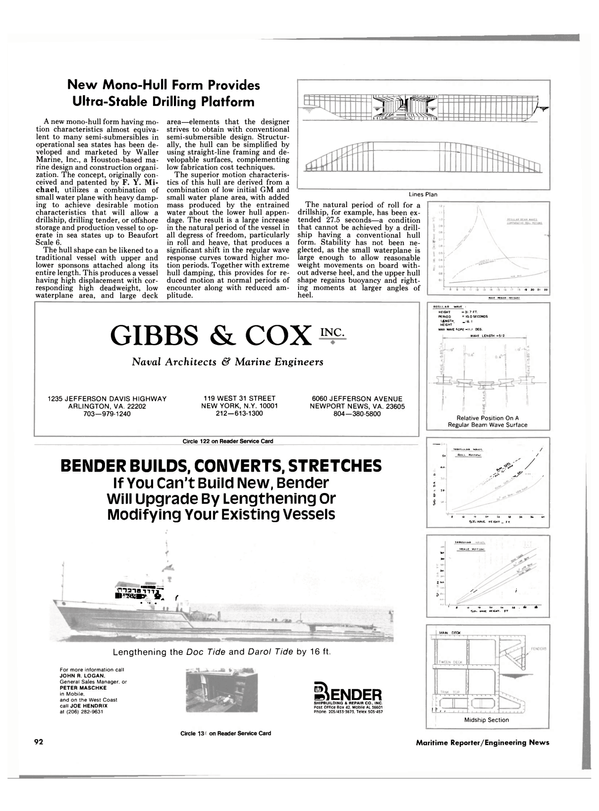