3. "Approaches, Moorings and Breakaways at Single Point Moorings and Storage Vessels," for masters, chief mates and other deck officers. Various size vessels can be maneuvered and moored in the Loop, Hondo, and similar areas.

4. "Shiphandling and Piloting in the St. Lawrence Seaway," uses two types of seaway vessels—120 miles of difficult sections of the Seaway.

Four persons for five days. Four levels of courses based on trainees' past experience. Two to four persons— three to five days.

5. "Canal Shiphandling and Piloting in Panama and similar areas," for apprentice to experienced levels.

Lock approaches with oblique and parallel walls—shiphandling in narrow channels with passing ships.

6. "Refresher Course—Tug-Towboat Handling," maneuvering a barge in a river or harbor with twinscrew tug in notch, on hip or with tow—emphasis on handling emergencies.

One to six persons (min.

class)—two and a half days.

Includes approaching and stationkeeping on a fleet oiler during UNREP, making and leaving anchorages at low speed with restricted water and current, and four point mooring operations. Three to five officers—three days.

2. "Risk Reduction," shiphandling and maneuvering using both the ship and restricted visibility bridge simulators with concentration on past accident situations.

3. "New Masters' Course," for chief officers taking their first ship as master or for experienced masters who have been on extended leave. The three- to five-day ship maneuvering course provides USCG equivalency for raise in grade (proposed USCG rules allow for such simulator courses as acceptable to the Commandant), USCG radar renewal, ROR refresher and Seaspeak instruction groups of six to 12 officers, as few as one from a company.

4. "Refresher Course—Close-in Shiphandling Emergencies," an intensive short course for masters and chief mates emphasizing reactions to unexpected and vessel-threatening situations—selected vessels and geographic areas—two to six persons (min. class)—two and a half days.

half C. Using the Interactive RVB Simulators: 1. "Radar-ARPA," five-day course for masters and chief officers ranging from a refresher on rapid radar plotting and parallel indexing to maneuvering a vessel in fog or rain squalls in restricted waters with traffic congestion. Includes coverage of the weaknesses of various systems.

2. "Advanced Radar-ARPA Refresher," this short course is intended for officers who are experienced in the use of ARPA systems.

Four to eight persons for three days. Can be integrated with shiphandling courses.

3. "Recognizing and Responding to Emergencies for Second and Third Assistants," watchstanding and handling emergencies in the full engine room simulator (diesel or steam)—maximizes hands-on experience.

Two to six experienced engineers (min. class)—two and a half days.

For more information and a copy of the 1986 catalog from Marine- Safety International, Circle 15 on Reader Service Card 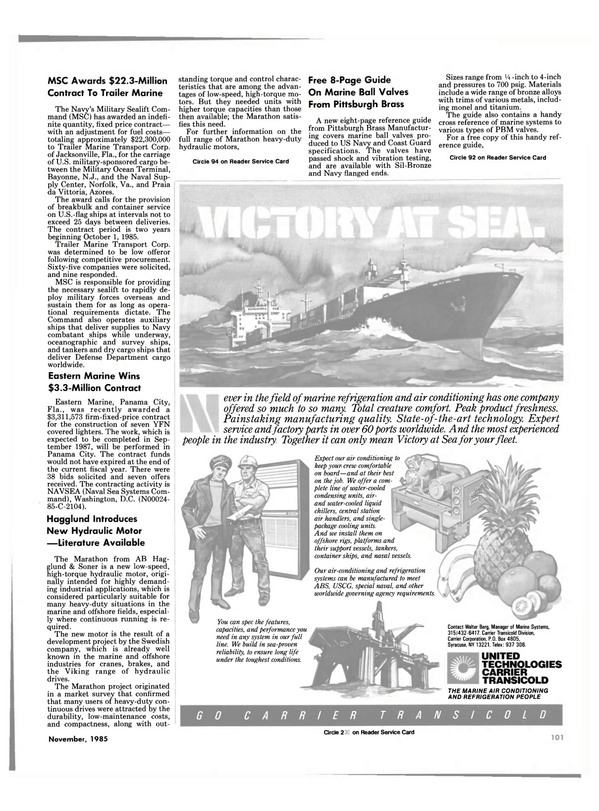