Kile, Supervisor of Shipbuilding, Sturgeon Bay, and Comdr. Lowell Mays, USNR, CHC (who rendered the invocation). A special guest at the ceremony was itihf e suh-i p >s spon- sor, Mrs. E. Dornell Kilcline, who had christened the vessel at its launching.

The USS Safeguard's sophisti- cated computer controls as well as advanced mission-essential equip- ment place a greater demand on the level of expertise from the crew.

These new ARS class ships are 255 foot, steel strongholds capable of towing a Nimitz class aircraft carrier, and are equipped to support salvage diving operations with what is said to be the finest life support air system in the Navy fleet. In addition, the ARS will perform firefighting services as of its broad scope of lifesaving salvage/assistance operations.

As part of the four-vessel Navy at PBI, this fall the USS Safeguard will depart for her home- in Pearl Harbor, Hawaii, while sister ship, ARS-51, Grasp, is commissioned, and a third vessel, the Salvor (ARS-52), will undergo at PBI.

Other activities at the yard in- elude the final steps involved in the 108-foot Yard Patrol Craft program.

The YP ships are ahead of schedule in trialing and subsequent delivery to the Annapolis Naval Academy.

This seven-ship contract marked the return to wood construction by the yard, incorporating all of the latest state-of-the-art techniques in wooden shipbuilding. The yard's ex- pertise in wooden ship construction is also benefitting the Navy mine countermeasure program. PBI launched the lead ship of the 224- foot wooden MCMs this past spring, and keel-laying ceremonies were also held for another MCM under contract. 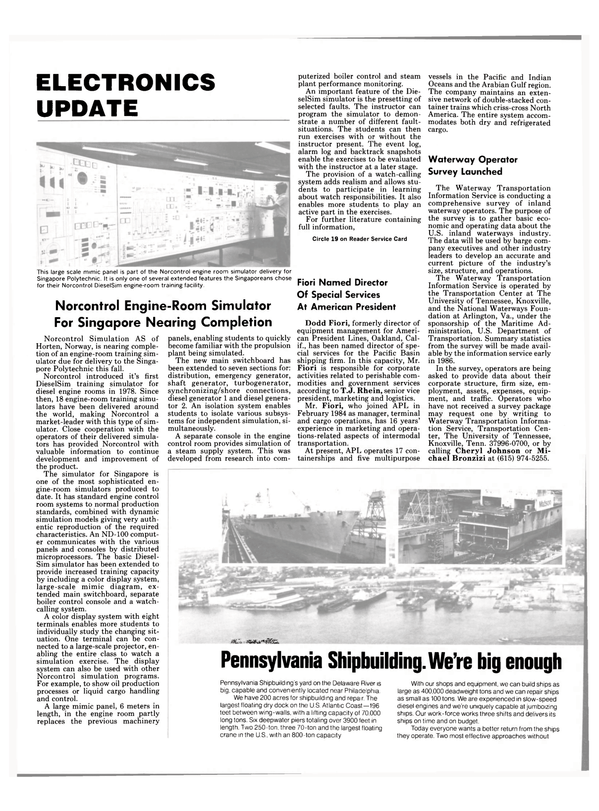