As the second largest consumer of energy aboard ships, the power generation equipment has been the object of many studies aimed at obtaining overall higher efficiency and lower electrical power costs.

One solution is driving a generator, at constant speed, off the main propulsion engine that is operated at varying speeds when fitted with a fixed-pitch propeller. Zahnraederfabrik Renk AG of Augsburg, West Germany, has developed a special gear system able to accomplish that result.

The company's RCF (Renk Constant Frequency) unit is a differential epicyclic gear capable of insuring constant-speed drive to the power generator in a fully automatic mode. This gear is usually mounted on the forward end of the engine crankshaft. The RCF allows a flexible layout in five different positions of the generator system, depending on the space available in the engine room. An additional possibility is to install the RCF along the propeller line on the main engine power takeoff side.

The RCF's speed superposition is achieved by hydrostatic or electric control. The basic gear ratio is cho- _ sen so as to obtain generator syn- chronous speed output for a stan- dard frequency generator at 85 percent of the engine rated speed. In this way the hydrostatic or electric controls of the RCF will drive the generator at constant speed while the main engine is operating between 70 and 100 percent of its rated speed. The annulus of the epicyclic gear will remain fixed while the engine is running at 85 percent of its rated speed; in this case the power transmission is merely mechanical.

If the engine speed drops, one portion of the power output is transmitted to the gear unit via a dc motor. The annulus is driven against the supporting torque by the motor, and the epicyclic gear is superimposed motorwise. The diesel engine associated with the mains and the current converter supplies the power for the dc motor/generator undergoing regulation.

In the event the diesel engine speed rises, the dc motor becomes the generator, and the surplus power transmitted by the gear unit is fed into the mains via the dc motor/ generator and the current converter.

The annulus is then rotated by the dc motor/generator towards the supporting torque, being simultaneously restrained, and the epicyclic gear is superimposed generatorwise.

The gear unit is connected to the forward crankshaft end of the diesel engine through a highly flexible coupling that dampens the vibration of the plant.

The dc motor/generator of vertical design is fitted on the gear casing (photo). It features an attached electromagnetic brake that makes it possible to mechanically lock the annulus. The generator is coupled to the gear unit through a bevel gear train at a 90-degree angle to the crankshaft. Between the gear unit and the generator there is an electromagnetic clutch that allows connection and disconnection of the generator during operation. This clutch also provides overload protection.

By adopting a suitable simulating calculation method, an optimal inter- related behavior of all drive train components is studied, including the propeller, main propulsion engine, gear unit, shaft-driven generator, and the mains supply including diesel-driven generators operating in parallel.

The high efficiency of the gear unit is one of the essential factors for the economy of the plant. The RCF system operates with an efficiency ranging between 93 and 97 percent. The system, which requires a relatively low capital investment, is also advantageous to use because of the potential fuel cost savings.

Renk has sold approximately 30 RCF systems to be powered by M.A.N.-B&W two-stroke engines.

This is a joint development of Renk and M.A.N.-B&W. Four 1,100-kw electrically controlled units are now in service on refrigerated containerships with fixed-pitch propellers built at the German shipyard Bremer Vulkan. Two 700-kw hydraulically controlled systems are for 79,900- dwt tankers built at the Uljanik shipyard in Yugoslavia, and one 900-kw unit is on order for Burmeister & Wain, Copenhagen.

A complete full color 26-page brochure fully describing in detail the Renk organization and its equipments and services on a worldwide basis is available free of charge. For your copy, Circle 20 on Reader Service Card 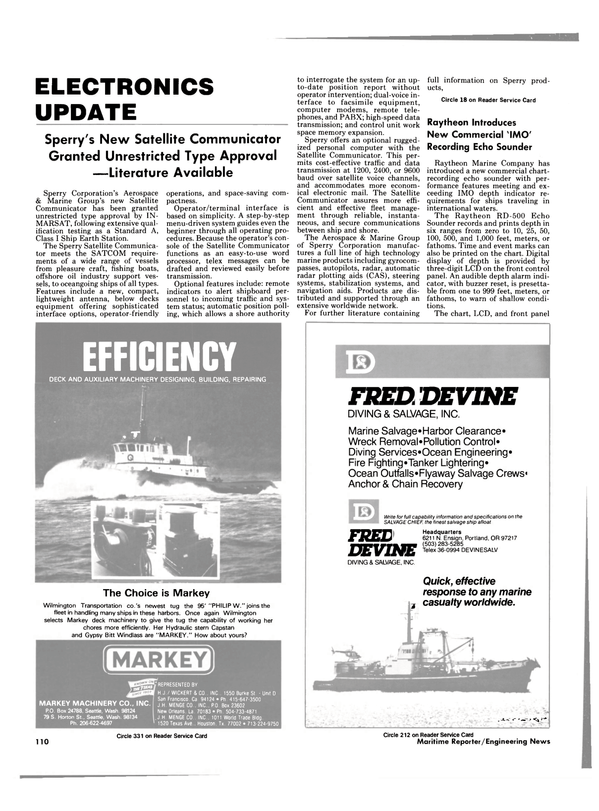