A new mono-hull form having motion characteristics almost equivalent to many semi-submersibles in operational sea states has been developed and marketed by Waller Marine, Inc., a Houston-based marine design and construction organization.

The concept, originally conceived and patented by F. Y. Michael, utilizes a combination of small water plane with heavy damping to achieve desirable motion characteristics that will allow a drillship, drilling tender, or offshore storage and production vessel to operate in sea states up to Beaufort Scale 6.

The hull shape can be likened to a traditional vessel with upper and lower sponsons attached along its entire length. This produces a vessel having high displacement with corresponding high deadweight, low waterplane area, and large deck area—elements that the designer strives to obtain with conventional semi-submersible design. Structurally, the hull can be simplified by using straight-line framing and developable surfaces, complementing low fabrication cost techniques.

The superior motion characteristics of this hull are derived from a combination of low initial GM and small water plane area, with added mass produced by the entrained water about the lower hull appendage.

The result is a large increase in the natural period of the vessel in all degress of freedom, particularly in roll and heave, that produces a significant shift in the regular wave response curves toward higher motion periods. Together with extreme hull damping, this provides for reduced motion at normal periods of encounter along with reduced amplitude The natural period of roll for a drillship, for example, has been extended 27.5 seconds—a condition that cannot be achieved by a drillship having a conventional hull form. Stability has not been neglected, as the small waterplane is large enough to allow reasonable weight movements on board without adverse heel, and the upper hull shape regains buoyancy and righting moments at larger angles of heel.

Ideal applications for the new hull form would be in stationary offshore use as a drillship or drilling tender.

Comparison of conventional drillship and semi-submersible motion with this heavily dampened hull concept provides an indication of its superior capabilities in heavy seas.

Additional applications might be for oil storage vessels or as an early production/ storage platform.

The accompanying curves show the motions in various sea states in comparison with a typical semi-submersible drilling vessel. A factor apparent from the curves is that the shorter, quicker motions are filtered out by the new hull form design.

Therefore the new ship will offer a safer, easier footing for the men working on deck.

Comparisons between the statical stability righting arm curves of the new ship and a similarly sized drillship are shown in the accompanying figure. The new hull demonstrated much more overall righting energy (area under the curve) than a conventional ship. The righting arm curve for the new hull shows a small steady rise from zero to 17 degrees, which is the angle at which the upper side hull touches the water surface. Inclinations past the 17- degree mark show a very large righting arm with a correspondingly large area under the curve. Due to the large area under the righting arm curve and the superior small roll motions in waves, it might be concluded that the resistance against intact capsizing of the new hull form is significantly greater than that of a conventional ship. It is concluded that with the appropriate and reasonable internal subdivision, the new hull form is unsinkable.

The possibility of a high-impact wave slamming on the under side of the upper hull extension was recognized, resulting in damage to the shell plating and internal structures.

Based upon the motion analysis, roll in a 30-foot significant wave height sea condition was predicted to be about 3.25 degrees double amplitude for a beam heading. This compares with a 4.6-degree double amplitude roll for the GVA 4000 semi-submersible. The associated heave response for the same beam wave is 33 feet.

The relative position of the hull on extreme regular beam waves is shown in the accompanying diagram to demonstrate the theoretical clearance of wave and upper hull structure. It is appreciated that some slamming will occur in irregular waves, particularly when the phase angles are different. Due to the hull's capability to resist roll, however, damaging impact is minimized.

The cost differential between an equivalent drillship and semi-submersible drilling vessel promoted the idea of combining the main advantages of both to formulate a new class of mobile offshore drilling unit—a mono-hull having motion characteristics that approach those of a semi-submersible while retaining the lower cost advantage of a drillship. The concept does not anticipate that the new hull design will replace properly utilized semi-sub- mersible drilling units, as they possess unique qualities for long-term drilling operations in extremely harsh environments. However, the outlined advantages of this new ship design should make it suitable for certain areas that are presently considered semi-submersible territory, thus bringing to the offshore industry a significant cost-saving device.

Summary A new mono-hull form has been specifically developed in an attempt to combine certain advantages of the semi-submersible and conven- motional ship-shape drilling vessels into a vessel of unique design. The 70 new hull form represents a well-balanced, workable design specifically suited to ships where seakeeping, environmental operability, and overall cost-effectiveness are the primary design requirements.

The basic advantages of the new vessel form when applied to a drillship application can be summarized as follows: • Excellent motion characteristics that approach those of a comparable semi-submersible.

• Economical advantages in hull fabrication due to the use of straight-line framing and developable surfaces for a single hull.

• High payload to displacement ratio when compared with a semisubmersible.

The variable load (drilling supplies) of this ship is 9,000 short tons, while a comparable semi-submersible would have 4,000 short tons.

• Large usable deck area in comparison with a conventional drillship is a direct result of the hull configuration having a beam of 96 feet, compared with a drillship with a beam of 70-75 feet. This beam increase accommodates drilling equipment and provides ample space for storage and working purposes.

• Safety: substantially improved intact stability characteristics at large angles when compared with a conventional drillship, thus incorporating a major advantage of a semi-submersible.

• The hull configuration provides good structural integrity when compared with a semi-submersible.

For further information and a complete copy of Waller Marine's report on the mono-hull form, Circle 21 on Reader Service Card 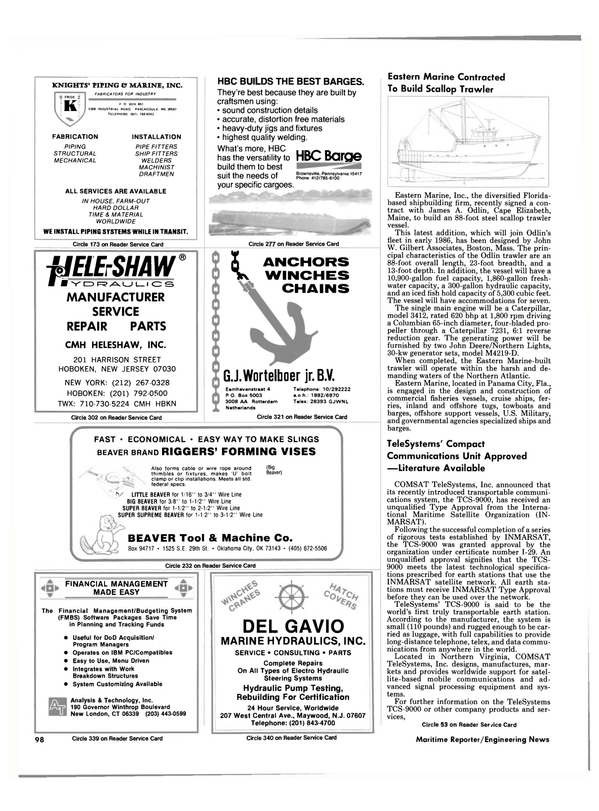