188,500-DWT Tanker For Transport Of Alaskan Oil Christened At National Steel And Shipbuilding

Mrs. Chauncey W. Cook, whose husband is a member of the board of directors of Shell Oil Company and the former chairman of the board of General Foods Corporation, sponsored the new tanker.

The two ships, the largest ever built on the West Coast, represent the first flight of San Diegoclass tankers to be designed and built by NASSCO. Each tanker has a crude oil cargo capacity of about 188,000 long tons (about 1.3 million barrels) and is chartered to Shell Oil Company of Houston, Texas, for long-term service in the transportation of crude oil from Alaska to mainland United States ports.

The two ships are 951 feet in length, 166 feet in beam, 78 feet molded depth, and have a loaded draft of about 59 feet. Propulsion is by a twin-boiler geared steam turbine plant which is capable of being operated continuously at 28,000 shaft horsepower. Engine speed and direction can be controlled from a console on the bridge.

The ships include the latest environmental features. They have full double bottoms and sufficient clean segregated ballast to comply with U.S. Coast Guard and proposed IMCO "International" Rules for Prevention of Pollution of the Sea by Oil. Current rules of the Environmental Protection Agency for no overboard discharge of sewage are met by full onboard retention in holding tanks. The vessels are also fitted with a collision avoidance radar system.

An inert gas system, designed to fill the void spaces in the cargo tanks, thereby minimizing the possibility of an explosive vapor mixture, has been fitted. The cargo system is designed with a holding tank to collect oil from tank washings for discharging to shore facilities. The bilge system contains apparatus to effectively separate and retain oil from the bilge waters for discharge to shore in accordance with the U.S. Coast Guard requirement. 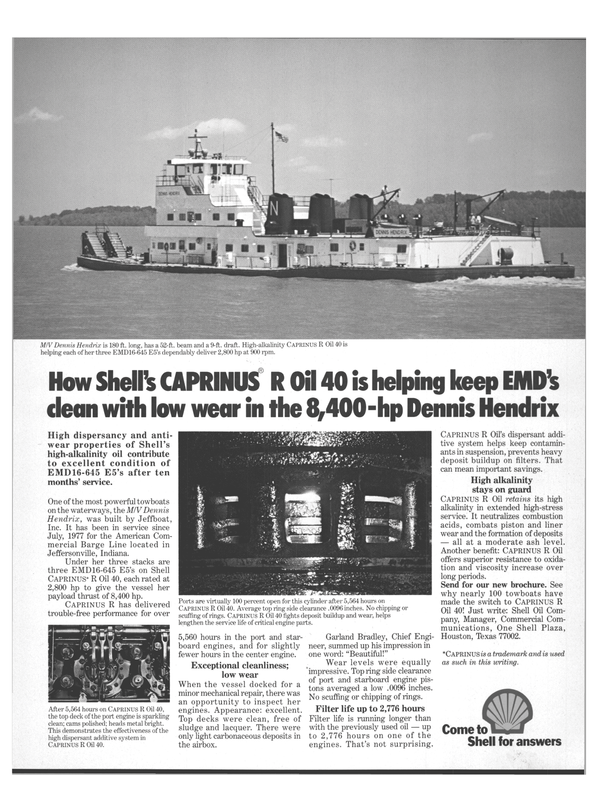