She is the niece of the late cofounders of Farreil Lines, John J. Farreil and James A. Farreil Jr. Her daughter Lisa was maidof- honor.

The S/S Argonaut is the seventh in a series of Lightning-class containerships of the same basic design, but is the first of two being constructed at Bath for Farreil Lines under an $86-million contract.

She was over 80 percent complete at time of launch and will be delivered in April 1979, some 16 weeks earlier than the contract delivery date.

The S/S Argonaut was named for an 1800s clipper ship, in keeping with a Farreil Lines tradition of naming its new vessels after the famed tall-masted sailing ships.

Among the world's most respected merchant marine companies, and the largest privately owned shipping firm in the U.S., Farreil Lines dates its heritage to 1872, when Capt. John Guy Farreil acquired part ownership of his first schooner.

The S/S Argonaut is expected to operate in Farreil Lines' U.S./ Mediterranean service.

Of the $43-million contract price per ship, about half is expended for equipment and materials from some 1,700 suppliers across the continental United States.

The product of national teamwork and BIW's work force of some 4,700, the S/S Argonaut is 610 feet overall in length, 78 feet in beam, and will displace 26,670 long tons fully loaded at her design draft of 27 feet.

She can carry 1,070 twentyfoot cargo containers below and above deck, general cargo on portable platforms, and features accommodations for 12 officers and 29 crew members in fully air-conditioned quarters.

Key to the production process is a technique called pre-outfitting in which many parts, components and systems are installed in ship sections away from the building ways.

They are then erected on the hull as well-advanced "building blocks" weighing up to 200 tons each.

The Resolute, the second Farreil containership, will be launched in August 1979, and delivered in February 1980, also four months ahead of schedule.

Bath Iron Works has a record backlog of construction under contract, including 11 new guided missile frigates for the U.S. Navy, two ships for Farreil, and overhaul work on four Navy frigates. 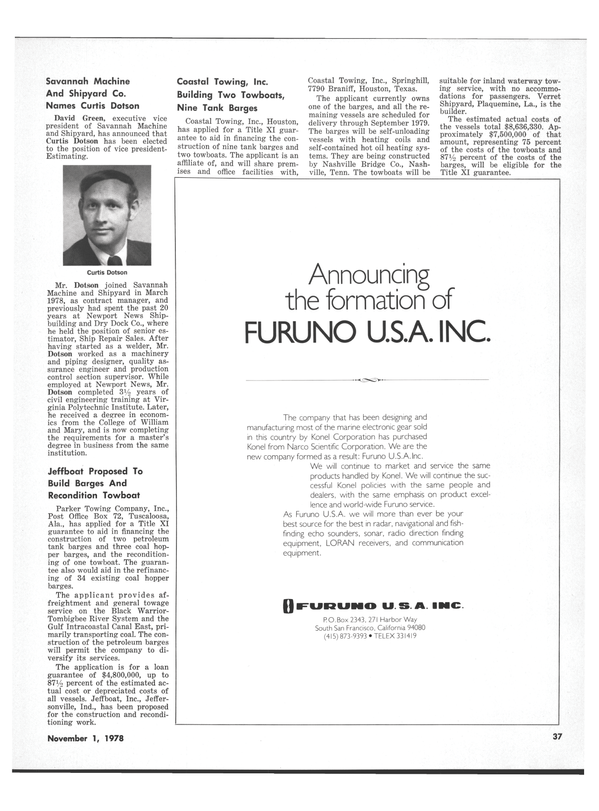