Under a separate research and development contract, the yard will match $1.2 million from the Maritime Administration to employ IHI as the major subcontractor for the purpose of providing production and technology guidance.

These dry-bulk ships will be owned by Levingston Falcon Shipping Company, Orange, Texas, and bareboat chartered for 20- years to Equity Carriers, Inc., New York, N.Y., for worldwide trading, principally in the carriage of grain, sugar, wood and iron products between Gulf Coast ports and the Far East.

With the above project, U.S.

Also, a contract for construction of four medium-endurance U.S. Coast Guard cutters was awarded at the start of the year.

Prospects for other awards in the near future include up to ten 40,000-dwt oceangoing tug-barge vessels, two of which would in involve CDS. In addition, by yearend, American President Lines, Ltd., San Francisco, Calif., is expected to place CDS contracts for construction of three new containerships, and conversion of f o u r existing breakbulk cargo ships to containerships. Delivery of the first new APL vessel is planned for 1983.

As to Naval shipbuilding, commitments against continuing pro- That's right. Navigation Safety Regulations say that come June 1, every ship over 10,000 gross tons must have a back-up radar system.

But they don't say you have to buy one.

Not when RCA's new plan gives you such a great deal on a leased radar system. It saves you real money!

You can have optional service maintenance. We have 12 Marine Service Centers ringing the U.S.

—so you get expert service in every port.

single source for your radar needs. For example, we can install and maintain a Krupp-Atlas radar with basic collision avoidance features for early warning.

When it comes to leasing navigation and communications equipment, it pays to go with RCA.

On October 13, Lockheed Shipbuilding & Construction Co., Seattle, Wash., was awarded a $3,000,000 contract for the design support of a new class of dock landing ship (LSD-41).

As in 1977, U.S. shipbuilders continue to lead the world in volume of new contracts for jackup offshore drilling rigs — 17 have been ordered since the start of 1978. 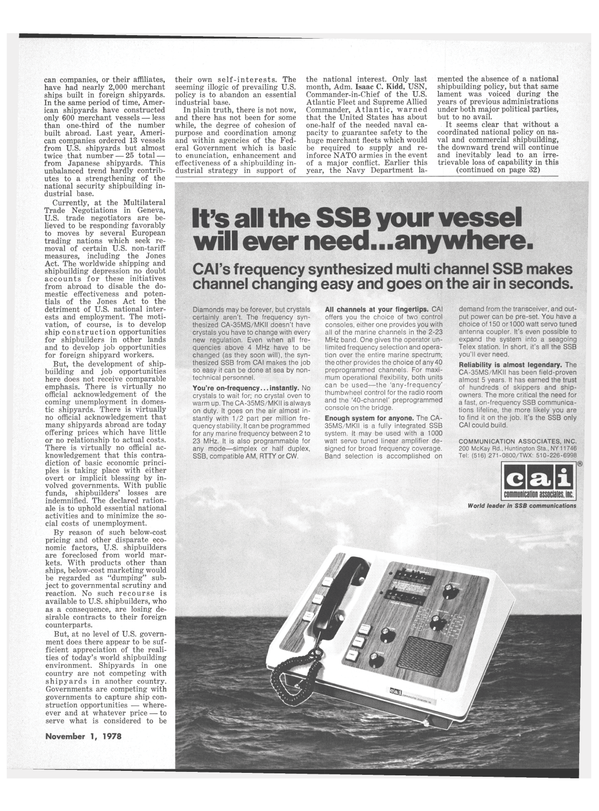