Under the federally assisted ship-construction program, the Maritime Administration (Mar- Ad), an agency of the U.S. Department of Commerce, will pay nearly half the costs of the vessels.

"This project is a significant first step in revitalizing the U.S.- flag dry-bulk fleet which now consists of only 19 vessels with a combined cargo-carrying capacity of 556,000 deadweight tons," Mr.

Blackwell said. Pointing out that no new dry-bulk carriers have been built in the United States since 1974, he added, "We currently have under review a maritime aids program for the drybulk industry which should be of further help in upgrading U.S.- flag dry shipping capacity.

"The construction of each ship will generate approximately 630 man-years of employment for the Levingston work force and a like amount for workers in the allied marine supply industry. The total for all five ships could be more than 6,000 man-years of employment for American workers, a significant development at a time when shipbuilding is in a worldwide decline." The ships will trade worldwide; it is anticipated that they will be carrying grain from U.S. Gulf ports to ports in the Far East, sugar from the Philippines to U.S.

The ships will be of a design produced by the Japanese shipbuilding firm of Ishikawajima- Harima Heavy Industries Co., Ltd.

(IHI). Under a separate research and development contract, also announced, Levingston Shipbuilding will match $1.2 million from Mar Ad to employ IHI as a major subcontractor. IHI is to share its production experience and technology with the Texas shipyard, with the information also to be available to the U.S. Government and other U.S. shipyards.

The first ship is scheduled for delivery December 31, 1980, with others to follow at six-month intervals.

The shipowner is a general partnership which includes Levingston Alpha Shipping, Inc., a wholly owned subsidiary of Levingston Navigation Company, Inc., which in turn is owned by the shipyard. 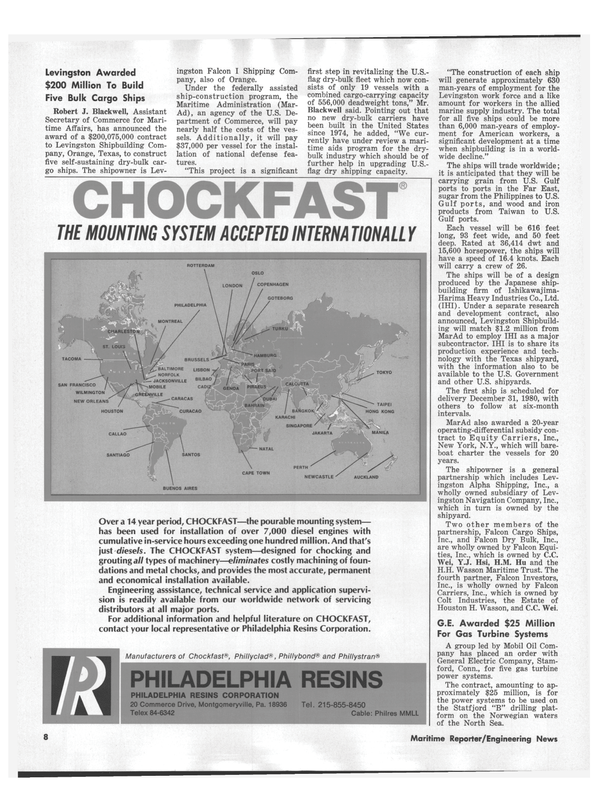