Gladding-Hearn Shipbuilding Corporation, 1 Riverside Avenue, Somerset, Mass. 02725, recently announced the delivery of an allsteel 48-foot by 16-foot tug, Tappan Zee II, to the New York State Thruway Authority. There is really nothing spectacular about the boat—it's just a plain, sturdy tug, built to American Bureau of Shipping + 1 classification. Preston R. Gladding, the tug's designer, made her look like a small tug should, with proper shear and jaunty visor.

A small Onan 110 a-c generator is also set in the engine room for supplying a-c power to hand tools used in bridge maintenance.

Due to the exposure of municipal purchasing and quality assurance, the Authority took every precaution by specifying Tappan Zee II to be built to American Bureau of Shipping classification.

Although the tug may seem conventional, her duties are varied and interesting.

The three-mile-long Tappan Zee Bridge has 16,000 wood cluster piles around each bridge pier for i c e b r e a k i n g purposes, essential protection against the large ice flows coming south down the Hudson River. The maintenance of these piles is a never-ending maintenance chore serviced by two full dock-building crews and two lighters—the Tappan Zee II handles the lighters and crew transfers.

Because the Hudson River bed cannot support the total bridge load, the main bridge supports are semi-buoyant concrete caissons f i t t e d with bilge pumps which must be maintained and inspected frequently, regardless if ice conditions exist.

Occasionally, a motorist will flick a lit cigarette off the bridge and the pile clusters will catch fire, therefore the tug is equipped with a 500-gpm firefighting monitor and pump for this emergency.

Although the Authority highway service trucks are equipped with firefighting apparatus, the Tappan Zee II can also spray foam on the roadway above with greater compatibility than the fire trucks, if an oil truck should catch fire. 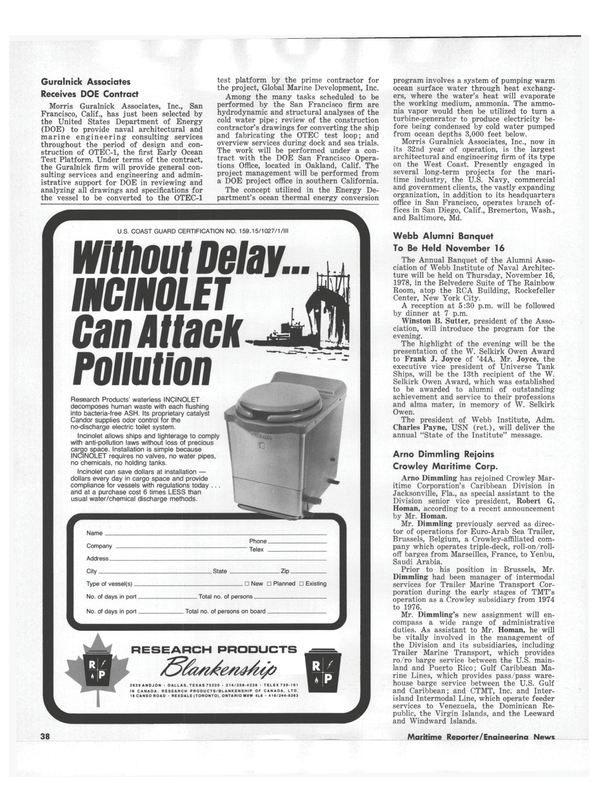