At close range, against the background of recent events, one could reasonably conclude that the shipbuilding industry of the United States is being sacrificed on the altar of illogical expediency.

In the climate of uncertainty and confusion created by official inertia over the recent past, one could quickly conclude that shipbuilding is not a favorite topic of discussion within the Carter Administration. Nor was shipbuilding given any particular impetus by the Ford Administration.

This bewildering phenomenon has taken place at a time (1) when there is no disagreement, in or out of government, on the essentiality of shipbuilding facilities for national security, (2) when there is increasing evidence that the capabilities of the industry are insufficient for a short war or for any extended conflict, and (3) when there is no disputing the fact that a substantial downturn in shipyard employment over the next four years has already commenced. Some 45,000 to 50,000 skilled shipyard workers and up to another 150,000 employees in supporting activities, and their families, will be affected. Modernized production facilities will be idled.

The cumulative impact of these developments can only be characterized as self-degradation of the highest order with serious prospective dangers to the public good. To argue that shipyards in distant lands with differing geopolitical objectives, differing economic conditions, differing work ethics, differing regulatory and statutory standards, and differing national attitudes can compose a satisfactory substitute for a reliable mobilization industrial base for shipbuilding and ship repairing under U.S. sovereignty is to engage in self-deception of the highest order. The end result could be costly and catastrophic.

Yet, in the present state of affairs, the thrust of Federal policymaking and decision-making as affecting shipyard activities in general, and shipbuilding in particular, is imprecise, incomprehensible, uncoordinated, counterproductive, and clearly ineffective.

The intent of the Congress, as declared precisely in various statutes and frequently reaffirmed, has been, and is now being, cir- cumvented, consciously or otherwise.

The essential role of shipbuilding and shipyard activities somehow escapes attention, or is knowingly dismissed, by policymakers and decision-makers at top levels of the Federal Government.

The historically proven affinity with national security is ignored, purposely or otherwise.

To be sure, shipbuilding policy cannot be rationally or realistically formulated in a vacuum without cognizance of other equally important national policy considerations.

The shipbuilding problem clearly cannot be solved in isolation from all other national problems. In this sense, a major failing of government in these complex times has been, and still is, the absence of creative coordination in the solution of interacting public issues. The full sway of national ingenuity and national resources is only rarely wielded comprehensively—and effectively —for the public good.

Maintenance of a shipbuilding industrial base is not considered in the formulation of import policy pertaining to liquefied natural gas (LNG). A diminishing naval shipbuilding program, reflecting an illogical downgrading of naval supremacy and maritime superiority, does not assure effective utilization of available production facilities, nor contribute to operational or workforce stability in our shipyards. M o r e o v e r , U.S.

Though the imbalance of trade and the imbalance of international payments persists — indeed, they seem to d e t e r i o r a t e steadily— Federal authorities illogically condone the actions of U.S. companies in building ships in foreign shipyards, operating them with alien crews, registering them under foreign flags, and then permitting them to participate in U.S. foreign commerce with tax advantages not available to U.S.- flag shipping companies. This momentum, often officially inspired, is not slowing.

can companies, or their affiliates, have had nearly 2,000 merchant ships built in foreign shipyards.

In the same period of time, American shipyards have constructed only 600 merchant vessels — less than one-third of the number built abroad. Last year, American companies ordered 13 vessels from U.S. shipyards but almost twice that number — 25 total — from Japanese shipyards. This unbalanced trend hardly contributes to a strengthening of the national security shipbuilding industrial base.

Currently, at the Multilateral Trade Negotiations in Geneva, U.S. trade negotiators are believed to be responding favorably to moves by several European trading nations which seek removal of certain U.S. non-tariff measures, including the Jones Act. The worldwide shipping and shipbuilding depression no doubt a c c o u n t s f o r these initiatives from abroad to disable the domestic effectiveness and potentials of the Jones Act to the detriment of U.S. national interests and employment. The motivation, of course, is to develop ship c o n s t r u c t i o n opportunities for shipbuilders in other lands and to develop job opportunities for foreign shipyard workers.

But, the development of shipbuilding and job opportunities here does not receive comparable emphasis. There is virtually no official acknowledgement of the coming unemployment in domestic shipyards. There is virtually no official acknowledgement that many shipyards abroad are today offering prices which have little or no relationship to actual costs.

There is virtually no official acknowledgement that this contradiction of basic economic principles is taking place with either overt or implicit blessing by involved governments. With public funds, shipbuilders' losses are indemnified. The declared rationale is to uphold essential national activities and to minimize the social costs of unemployment.

By reason of such below-cost pricing and other disparate economic factors, U.S. shipbuilders are foreclosed from world markets.

With products other than ships, below-cost marketing would be regarded as "dumping" subject to governmental scrutiny and reaction. No such r e c o u r s e is available to U.S. shipbuilders, who as a consequence, are losing desirable contracts to their foreign counterparts.

But, at no level of U.S. government does there appear to be sufficient appreciation of the realities of today's world shipbuilding environment. Shipyards in one country are not competing with s h i p y a r d s in another country.

Governments are competing with governments to capture ship construction opportunities — whereever and at whatever price — to serve what is considered to be their own s e l f - i n t e r e s t s . The seeming illogic of prevailing U.S.

In plain truth, there is not now, and there has not been for some while, the degree of cohesion of purpose and coordination among and within agencies of the Federal Government which is basic to enunciation, enhancement and effectiveness of a shipbuilding industrial strategy in support of the national interest. Only last month, Adm. Isaac C. Kidd, USN, Commander-in-Chief of the U.S.

Atlantic Fleet and Supreme Allied Commander, A t l a n t i c , warned that the United States has about one-half of the needed naval capacity to guarantee safety to the huge merchant fleets which would be required to supply and reinforce NATO armies in the event of a major conflict. Earlier this year, the Navy Department lamented the absence of a national shipbuilding policy, but that same lament was voiced during the years of previous administrations under both major political parties, but to no avail.

It seems clear that without a coordinated national policy on naval and commercial shipbuilding, the downward trend will continue and inevitably lead to an irretrievable loss of capability in this country, and a reduced resource base. The gamble in terms of national security could be hazardous.

The best minds, in and out of government, must search for prompt and appropriate antidotes if a U.S. shipbuilding industrial base to serve essential national interests is to be upheld. This effort however, will require far more intellectual and attitudinal consistency than has been the case for many years.

At this moment, the House Committee on Merchant Marine and Fisheries recommends the establishment of a Navy-Maritime Advisory Board. While other countries have quickly taken steps to preserve an essential core of shipyard f a c i l i t i e s , the White House has opted for another interagency maritime study. The Defense Department is refining mobilization requirements to suit ill-defined p o l i t i c a l goals. The Navy Department, in effect, says that commercial shipbuilding must sustain the shipbuilding base; the Maritime Administration, on the other hand, says the base must be maintained by naval shipbuilding. Yet, programs for both have dropped sharply.

Meanwhile, the National Security Council asserts little or no interest in the formulation of long- range shipbuilding and shipyard policy.

So the record goes! Obviously, logical and effective change must result from something more positive than adoption of another noble-sounding resolution at this fine Convention. To be sure, the maritime community, as represented by The Propeller Club of the United States, can and must play a significant role in shaping the maritime destiny of this great nation. But, labor and management cannot expect that government alone will solve today's serious problems. Policy leadership must of course come from the highest office in the land and the Congress, but the ingenuity for implementation must come from this audience and our counterparts throughout the nation.

In this spirit, my own organization is, at this moment, engaged in answering this important question: what must the industry do, on its own initiative, to improve the present unpromising outlook and to ensure that an appropriate long-range national shipbuilding policy is promptly adopted? In this task, we need your help and would welcome your suggestions. 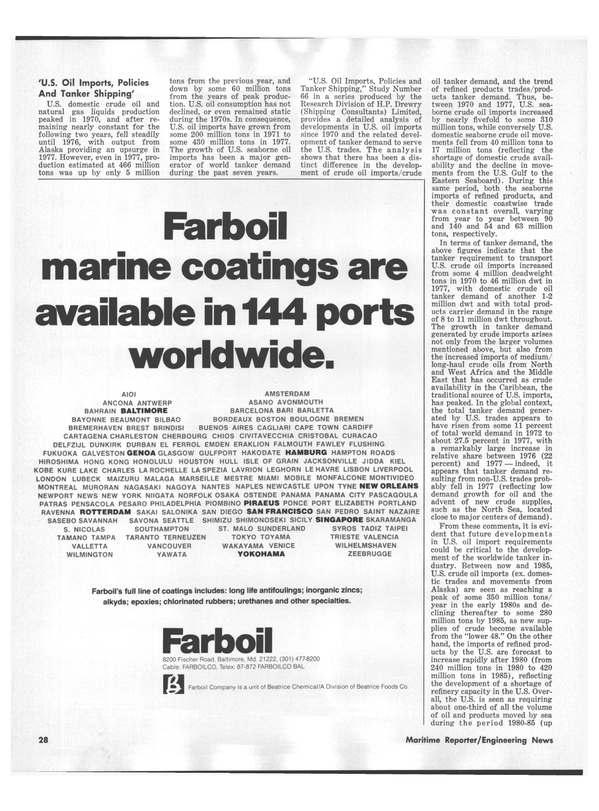