In his brief remarks, Mr. Blackwell praised the Society's record of achievements and responded to the keynote speech by Gerard Bourceau, Bureau Veritas's managing director of maritime services.

Noting the current slump in the worldwide shipping and shipbuilding industries, Mr. Bourceau said: "The crisis cannot be solved along national lines but needs a concerted action from the world's leading nations. . . . " Mr. Bourceau also said that "Rising protectionism p e r v a d e s the already exacerbated rivalries for shares of the shrunken market." This protectionism, he said, may "ultimately lead to total rigidity, permanent structural problems and havoc in the international scene with taxpayers having to bear non-negligible costs." From September 20 to October 10, 1978, Mr. Bourceau paid a visit to the USA to celebrate the 150th anniversary of Bureau Veritas and further the relationship between the Society, its owners and interlocutors in the American maritime circles.

During his stay, Mr. Bourceau called on various important U.S.

and foreign organizations and p e r s o n a l i t i e s in the maritime world, including Robert Blackwell, Assistant Secretary of Commerce for United States Maritime A f - fairs; Adm. John Briggs Hayes, Commandant of the United States Coast Guard; Robert T. Young, chairman of the board of American Bureau of Shipping, and president of The Society of Naval Architects and Marine Engineers; Fred T. Lininger, chairman of the board of Bureau of Maritime Affairs of Liberia, and Dr. Frank L. Wiswall, vice chairman of the board; and Capt. J.C. Musser, Chief of Maritime Safety Department of the Republic of Panama.

The celebration of the 150th anniversary took place on October 5, 1978, in New York City at the Waldorf Astoria. 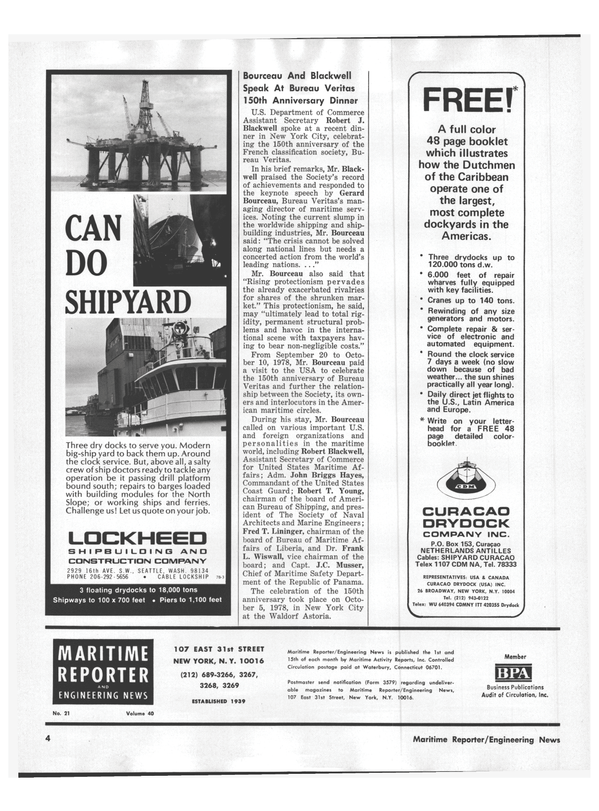