The Arthur Foss. the fourth tractor tug for Foss Launch & Tug Co., was christened recently in ceremonies at Foss Terminal in Seattle, Wash.

Performing the christening were co-sponsors Patricia Foss and Christine Foss, the daughters of Arthur Foss, a member of the Foss company founding family and for whom the vessel was named.

Born in 1885, Arthur Foss literally grew up in the tugboat business, and helped his father and two brothers build today's successful operation. He served as president of the Foss company in the early 1920s, and became chairman of the board in 1955.

Like the three tractor tugs previously c o m m i s s i o n e d , the 4,000-hp Arthur Foss features a cycloidal propulsion system that enables it to produce thrust in any desired direction without changing its heading. It can move sideward, turn a full circle in a tight space, and come to a complete stop within approximately its own length.

These capabilities allow the tug to escort tankers and assist ships and tows in a minimum of time while ensuring maximum safety.

The vessel features two Voith- Schneider vertically oriented cyclodial propellers with a blade orbit diameter of 3,200 mm (126 inches). Both propellers have five blades, each of which measures 2,006 mm (79 inches) in length. 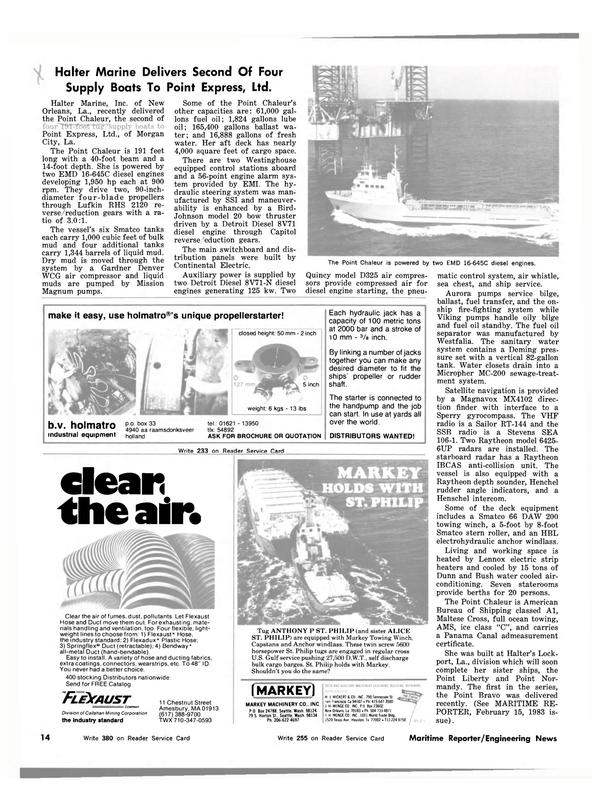