The RAYPATH uses the same 16-inch Bright Display Mariners Pathfinder® Radar which is built into the Raytheon RAYCAS, the ARPA currently used on ships throughout the world.

The RAYPATH scans to 64 miles and acquires and tracks up to 10 targets at once in a range of l1/* to 12 nautical miles. As the operator adds new targets, least-dangerous tracked targets automatically cancel. Dangerous targets are designated with flashing symbols, dots show target trails, and vector lines indicate target headings and speed. An auto detection provides warnings of targets entering a preset safety zone. To help eliminate target swap, RAYPATH's tracking window automatically shrinks to minimum size after it has made a target acquisition.

Raytheon's new "track-ball" mechanism makes target acquisition fast and precise. The rotating track-ball not only allows the operator to manually designate and cancel targets, move EBL, and place a "true mark," but also offset ownship up to 67 percent in any direction from the center of the CRT display, increasing viewing range to over 20 miles.

Targets are tracked up to a relative speed of 150 knots — even seaplanes on or near the surface can be monitored.

Raytheon reports operation of the RAYPATH is simple, with p u s h - b u t t o n program controls mounted directly above the display screen. The system's slim line makes it easy to install, even in small wheelhouses. Raytheon's exclusive digital Bright Display provides uniform, very sharp electronic echo signals, which can be viewed simultaneously by several observers, even in daylight. The CRT display can be set for relative motion and true motion, and can be switched alternately from North-up to Course-up presentations.

The Raytheon Interswitch permits any two models of Raytheon Bright Display Radars to be interswitched. For example, a single RAYPATH display can be interswitched to either X-band or S-band radars, whichever is appropriate for existing weather.

The Raytheon Adaptive Interface Unit permits a RAYPATH display to be interfaced with other 12 and 16-inch displays, including Raytheon/Selenia, as well as those of other manufacturers.

The new RAYPATH ARPA, is a product of eight years of intensive Raytheon design and testing.

For a free copy of the new Raytheon ARPA color brochure, Write 19 on Reader Service Card 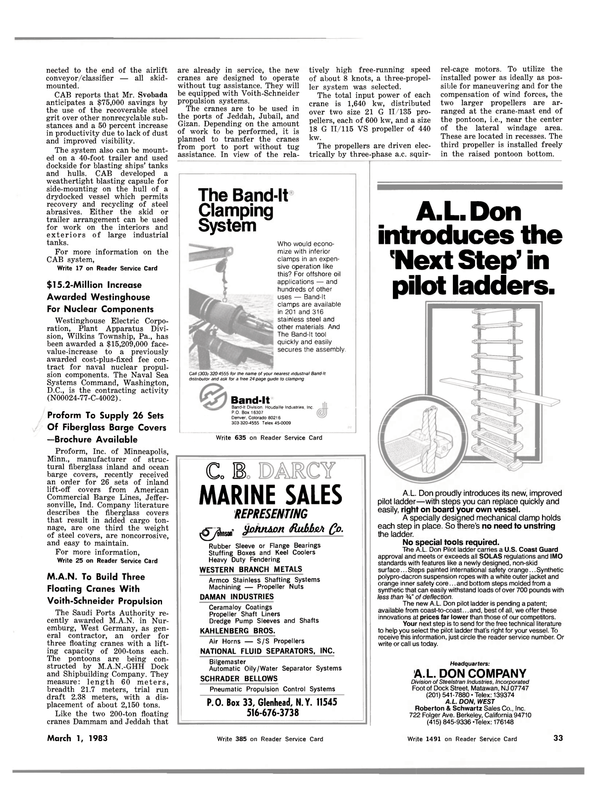