House passage of this legislation, which contains new comprehensive policy reforms, has been a major priority of The American Waterways Operators, Inc. in the 98th Congress.

Four other House committees— Merchant Marine and Fisheries, Agriculture, Interior and Insular Affairs, and Judiciary—also acted on various portions of the measure.

Under H.R. 3678, the federal government, through the establishment of a Port Infrastructure Trust Fund, would be responsible for construction and operation and maintenance (O&M) of ports with channel depths between 14-^45 feet ("general cargo ports"). For ports deeper than 45 feet, ("deep-draft ports"), non-federal interests would be required to pay 50 percent of construction costs, as well as 50 percent of incremental O&M costs.

Ports wishing to impose user fees to recover their non-federal share would be permitted to impose such fees only on vessels requiring a channel greater than 45 feet. This latter provision is extremely important to AWO members operating shallow-draft vessels, with no need for deeper channels.

Also important to AWO is the bill's establishment of new cost sharing formulas of seven priority lock and dam projects: a second lock at Lock and Dam 26, Upper Mississippi River; replacement of Gallipolis Locks, Ohio River; Bonneville Lock, Columbia River; Oliver Lock, Black Warrior River; Locks 7 and 8, Monongahela River; and Winfield Lock, Kanawha River, all authorized in H.R. 3678. Under this provision, one-third of the cost of construction for these seven projects would be financed from the Inland Waterways Trust Fund. No increase in the currently-mandated schedule of waterway user taxes would be necessary under this formula (NOTE: under P.L. 95-502 the inland waterways industry pays a fuel user tax of 8

3678, as approved by the Public Works and Transportation Committee, and to oppose any attempts to impose new or additional user fees for shallow-draft waterway operators, inland and coastal.

To assist in educating Congress and the public about the need to enact comprehensive water resources legislation, specifically H.R.

3678, AWO formed a broadbased group of Washington corporate and association representatives. This group continues to assist both in lobbying and public affairs efforts.

General debate on the House floor was held June 18, with final action, June 28—29. At the last minute, the Administration got into the picture, through the Office of Management and Budget (OMB), sending up four pages of amendments to the bill. These amendments were designed to bring H.R. 3678 in line with the Senate bill, S. 1739. No member of the House, not even a conservative Republican, would offer these amendments of behalf of the Administration.

Subsequently, OMB Director David A. Stockman issued a letter expressing Administration support of an amendment to be offered by Rep. Thomas A. Petri (R-WI). The Petri amendment required local interests to provide "upfront" financing for port development and other types of projects authorized in the bill, with the exception of inland waterway projects.

AWO mounted a major lobbying effort to defeat the Petri amendment, which was voted down by a vote of 213-85.

Roe (D-NJ), Water Resources Subcommittee chairman; and Arlan Stangeland (R-MN), ranking minority member of that Subcommittee— also circulated a letter to each member of the House urging opposition to a number of amendments, including the Petri proposal.

While a major hurdle has been overcome with the passage of H.R.

3678, the Senate version, S. 1739, has languished. This bill, introduced by Sen. James Abdnor (RSD), chairman of the Senate Water Resources Subcommittee, was introduced in Aug. 1983. It contained a number of new concepts never before addressed, but was subsequently approved and reported by the committee in Nov.

1983, without benefit of hearings on these new concepts.

As introduced, S. 1739 would impose an annual federal obligation cap of $500 million on all inland waterway expenditures. (This cap was increased to $646 million, as reported by the Committee.) It would establish an Inland Waterway Users Board to advise the Secretary of the Army on expenditure levels so that the inland waterway system would be adequate to meet the needs of commercial navigation. Any funding needs in excess of the annual federal cap would be generated from new inland waterway user fees— the type and amount of which would be determined solely by the Secretary of the Army. In addition, this title authorized five of the above-referenced lock and dam projects (Oliver and Winfield locks were not included), as well as a number of inland harbor projects.

The port title of S. 1739 was unacceptable to the barge and towing industry as well because it would have allowed ports to impose deepdraft user fees on indirect beneficiaries AWO's Board, also in Sept. 1983, voted to oppose S. 1739 while directing the staff to work with Sen.

Abdnor and his aides to attempt to improve S. 1739. AWO, working with other waterway and shipper groups, met with limited success early on, but was able to persuade Sen. Abdnor and full Environment and Public Works Committee Chairman Robert T. Stafford (R-VT) to hold hearings on Titles V and X (inland waterways and ports, respectively), albeit in Jan.

1984, after the bill was already reported by that committee.

Committee hearings emphasized the fervent opposition to these two titles by affected groups and, immediately after these hearings, Sen. Abdnor asked AWO and others to develop amendments which he hoped would offer a constructive alternative to both the port and inland waterway provisions. A set of "improving" amendments were drafted and distributed; at the same time, AWO was working with the Senate Finance Committee to see if this committee would assert jurisdiction over revenueraising provisions in Titles V and X. In May, the Finance Committee did receive sequential referral of three sections of S. 1739; the committee answered a number of AWO concerns by removing the authority of the Secretary of the Army to impose user fees, restoring the historic prohibition against administrative imposition of user fees, and requiring Congressional approval of any new inland waterway user fees. The Committee would also require port user fees to be approved by Congress.

As a result of Senate Finance Committee action, most Washington organizations felt that the risks of bringing the bill to the Senate floor had diminished and have urged Majority Leader Howard Baker to schedule the legislation.

As of this writing a number of controversial issues are outstanding so that it seems unlikely that S. 1739 will be brought to the Senate floor when Congress returns briefly to Washington, July 23- Aug. 10. However, if it appears that differences can be resolved so that a time agreement can be reached, the bill could come up in early Sept.

In a surprise move, Sen. Robert T. Stafford, Environment and Public Works Committee chairman, proposed a draft amendment to the inland waterway section (Title V) of S. 1739 which incorporates the Finance Committee amendments and eliminates other objectionable provisions of Title V—the cap, the advisory Users Board and the authority of the Secretary of the Army to impose fees. Instead, his proposal, similar in concept to H.R. 3678, would use the Inland Waterways Trust Fund to fund lock and dam projects.

AWO will be further exploring this proposal, which, if modified, could be a breakthrough for potential Senate floor action.

While AWO's membership supports enactment of omnibus water resources legislation this year, it does not support imposition of higher user fees as a quid pro quo.

Other Legislation Affecting the Barge and Towing Industry AWO support amendments to the Staggers Act to more adequately protect water carriers against rail predatory pricing practices. The Association testified last summer during Senate Surface Transportation Subommittee Staggers Act oversight hearings and submitted written comments to the House Subcommittee on Commerce, Transportation and Tourism. On June 29 of this vear, Sen. John C. Danforth (D-MO), Senate Surface Transportation Subcommittee chairman, introduced S. 2837 which would give standing to water carriers to challenge rail contracts on the basis that they are predatory or otherwise anti-competitive and to require the ICC, in regulating the rail industry, to be guided by a policy that clearly prohibits anticompetitive or predatory pricing and practices.

AWO has been meeting with shipper groups who are concerned that the Interstate Commerce Commission is half hearted in its implementation of the Staggers Act to address railroad abuses of the Act. A strong united front calling for Staggers Act reform in the next Congress is now being organized.

Additionally, AWO will continue to oppose efforts to ease prohibitions against rail ownership of water carriers, prohibitions which have been in force since enactment of the Panama Canal Act of 1912. The proposed acquisition of American Commercial Barge Line by CSX Corporation is the greatest threat to the survival of an independent barge industry and to the ability of shippers to enjoy competition in transportation (see map).

Longshore Act Amendments Another major legislative priority for the Association is enactment of amendments to the Longshoremen's and Harbor Workers' Compensation Act. Details of this proposal are covered in the AWSC report, elsewhere in this issue.

Jones Act AWO has always opposed legislative and regulatory efforts to undermine the Jones Act, which is the cornerstone of U.S. maritime tradition. The major battle which AWO and AWSC has been involved in during this Congress is legislation to re-flag two foreignbuilt passenger ships so that these vessels can compete in the domestic coastwide trade. The House Merchant Marine and Fisheries Committee twice approved different versions of this proposal, both introduced by Rep. Clay Shaw, with House Merchant Marine Subcommittee Chairman Mario Biaggi as the leading proponent of this effort on the basis of jobs it will create in the maritime industry.

(Once these vessels are reflagged, the crews must be U.S.

citizens.) Companion legislation introduced by Sen. Ted Stevens was narrowly defeated in the Senate Commerce Committee by one vote.

Because House parliamentary rules made it virtually impossible to bring this bill to the House floor, supporters were successful in attaching a revised version to FY 85 defense authorization legislation as a national defense "troop transport" amendment. The Senate Defense Authorization bill contains no comparable provision; a House-Senate conference will determine whether the amendment survives. Meanwhile, both propo- nents and opponents are searching for other opportunities to enact this bill into law this year.

AWO and AWSC are concerned that granting a waiver to allow these two ships to enter the Jones Act trade will establish a precedent.

Furthermore, it would provide a tremendous competitive advantage to the owners of these two ships, to the detriment of other parties interested in development of a U.S. built vessel industry.

Oil Spill Liability Fund AWO has long been on record in support of establishment of an oil spill liability compensation and cleanup fund, providing that it pre-empted other federal, state and local requirements contained in the Act, and would not increase vessel limits of liability to unreasonable and uninsurable amounts.

After one year of opposition to such legislation, Secretary of Transportation Elizabeth Dole announced that the Administration now supported oil spill legislation contingent on several revisions to the bill, H.R. 3278, approved last year by the House Merchant Marine and Fisheries Committee. The Administration would raise limits of liability for all vessels to $1,000 per gross ton—an almost tenfold increase in the committee-approved level for inland oil barges, and more than twice that which the committee recommended for other vessels. AWO opposes these limits.

Because so few legislative days remain in this session of Congress, it is unlikely that there will be additional action in this area. However, as it has been throughout previous Congresses, passage of oil spill liability legislation will be a House Merchant Marine and Fisheries Committee priority. 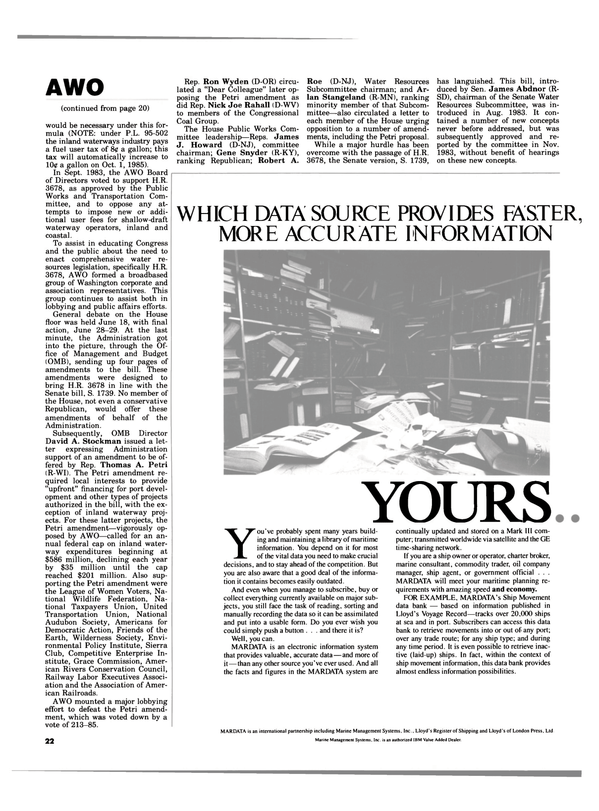