Herman J. Molzahn, Vice President, Operations The American Waterways Operators, Inc. is the only association in the United States which focuses on the regulatory interests of the coastal and inland barge and towing industry. Through its committee structure, AWO carefully monitors all regulatory proposals dealing with the operation of vessels and waterways. Recommendations are made by AWO committees which eventually become recommendations to the Coast Guard via the Towing Safety Advisory Committee, or directly to the Corps of Engineers and other federal agencies. The Towing Safety Advisory Committee (TSAC) is a congressionally mandated advisory committee to the Coast Guard which was established by Congress in 1980 at the urging of AWO. The effectiveness of TSAC is directly tied to the support of AWO and its committees.

The range of AWO's regulatory activities cover everything which might affect the barge and towing industry, whether from international organizations such as those conventions developed by the International Maritime Organization (IMO), or from local regulatory bodies. The effectiveness of AWO'S Washington, D.C. presence is enhanced by our Atlantic Regional office located in New York City, and by our Southern Regional office located in New Orleans, Louisiana.

Existing and pending regulations on licensing, boundary lines, pilots on tank barges, benzene, dry dock intervals, permits to build new structures on the waterways, National Transportation Safety Board recommendations, vapor recovery, load lines for river barges traveling a short distance on Lake Michigan, and Subchapter O revision— are only a sampling of the many regulatory issues before the AWO which cover the broad spectrum of inland, coastal, and Great Lakes navigation and special equipment regulations for power driven vessels and for vessels carrying hazardous cargoes. Since compliance with inappropriate regulations could quickly raise operators costs to the point where water transportation is uneconomical, it is necessary for the industry to watch these developments and provide the input necessary to avoid regulatory overkill. The article outlines a few recent developments in AWO's regulatory activity.

One example of our work involves proposed changes to licensing regulations, which were in part brought on by actions of the IMO. The licensing proposal, one of the most complex ever issued by the Coast Guard, would have disrupted the current towing indus- try licenses without any commensurate benefit to the industry or to safety. In part, through the efforts of AWO, and the understanding by the Coast Guard, it is expected that current towing licenses will be certified as an equivalent under the IMO Convention. It is expected that the Coast Guard will issue a supplemental notice of proposed rulemaking on licensing in the next few months.

On another issue, what can be so simple as drawing a line? The apparent simplicity soon disappears if a different world of regulations for licenses, crew size, construction and equipment lies beyond the line. To make matters more complicated, draw additional lines for different requirements and cross the lines here and there.

A recent rulemaking on boundary lines to implement various stat statutes was issued by the Coast Guard, and it presented just such problems.

The charts were viewed by the Coast Guard at a TSAC meeting and detailed written comments were submitted to express the confusion which now exists as a result of the boundary line proposals.

This thorough analysis conducted by AWO will no doubt assure that clarity will be achieved in the expected boundary line rulemaking. A supplementary notice of proposed rulemaking is anticipated in the next few months.

In response to the Coast Guard's pilotage proposal, AWO conducted an economic impact survey to determine the cost of employing pilots on seagoing tank barges over 1,000 gross tons. The total bill to the industry for 1982 would have exceeded $88 million with no demonstrated increase in safety and, in fact, the probability of a decrease.

A final rule is expected which will permit towing vessel operators to do their own pilotage.

Pending benzene regulations by the Occupational Safety and Health Administration followed by Coast Guard implementation of those standards for the marine industry has great significance not only for benzene, but for all chemicals carried by tank barge. The standard for benzene will no doubt serve as a mode) for the carriage of all other disease-causing chemicals.

AWO has formed a subcommittee to anticipate this rulemaking and they are ready to respond appropriately when the time comes. The subcommittee is currently studying information on marine personnel exposures as well as looking at experiments that member companies have conducted on equipment.

An opportunity to change the time intervals for dry docking inspected vessels and for tailshaft examinations has developed because of an advance notice of proposed rulemaking issued by the Coast Guard. Through AWO, both inland and coastal operators are reviewing their experience with dry docking. This information will be tabulated and a recommendation will be made by AWO at the next TSAC meeting tentatively scheduled for October 11, 1984, in Washington, D.C.

On another front, there are many federal laws and regulations with which the industry may or may not be complying, or which even the Coast Guard may not be actively enforcing because the violation of such regulations and laws is not causing marine casualties.

However, these laws are still on the books and when an issue emerges it can cause a great problem for both the Coast Guard and the industry. For the past 20 years, the industry has operated unmanned river hopper barges for a short distance on Lake Michigan from Calumet Harbor, Illinois, to Burns Harbor, Indiana. Technically, these river barges are required to have limited Great Lake load lines. However, in practice, virtually no barge in that trade has such a load line. The issue emerged in 1975, and the industry and the Coast Guard began working on a solution.

As time passed, and personnel changed, the effort faded away and the issue was dormant until last year. In the winter of 1984, a severe storm hit Lake Michigan and three barges in safe harbors of refuge sank. None of the barges which sank had load lines, and even if they did it would not have averted the sinkings. This incident again brought the issue to a head. AWO formed a subcomittee and it has pursued all administrative remedies with the Coast Guard. The Coast Guard formally holds that the only solution to this problem is a legislative one and therefore, they cannot grant regulatory exemptions to the vessels in question. AWO is now in the process of taking this issue to Congress.

Actions by local governments also create problems which could spread across the nation and cause serious harm to the industry. Santa Barbara County, California, for instance, has proposed a ban on water transport of crude oil. After January 1, 1990, all crude oil would have to be moved by rail and pipeline and all existing marine terminals would have to be dismantled. AWO and its members have testified at the hearings and they have sent letters for the record objecting to the proposal.

The AWO also provides a much needed advisory service through its Navigation and Structure Subcommittee.

This group, composed of river pilots, makes itself available to advise builders of marine facilities and fleeting areas, and the Corps of Engineers, on whether the proposed facility is safe for river navigation from the pilot's view point. In many instances where the proposal was deemed unsafe, the committee members have worked with the facility interest to work out an acceptable solution.

AWO provides the necessary structure to focus the expert knowledge of the barge and towing industry on the regulatory problems which it faces throughout the nation. 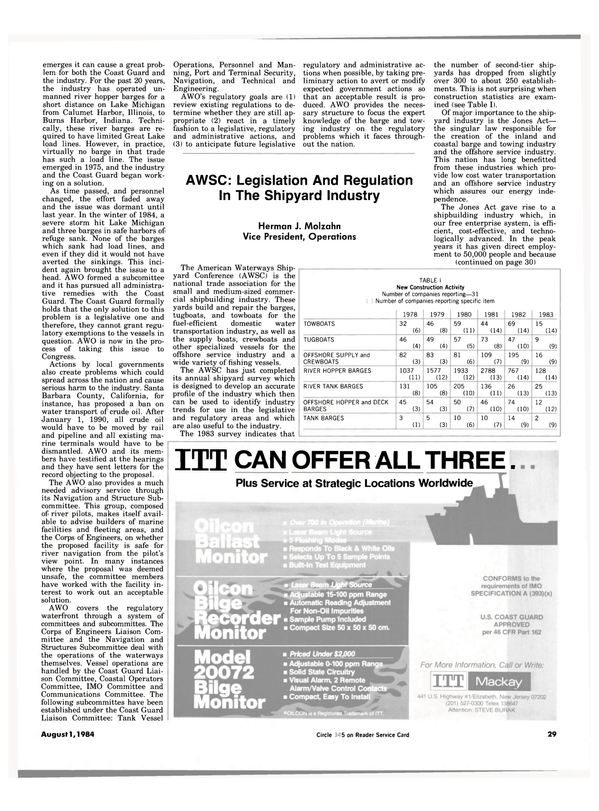