AWSC: Legislation And Regulation In The Shipyard Industry

Herman J. Molzahn Vice President, Operations The American Waterways Shipyard Conference (AWSC) is the national trade association for the small and medium-sized commercial shipbuilding industry. These yards build and repair the barges, tugboats, and towboats for the fuel-efficient domestic water transportation industry, as well as the supply boats, crewboats and other specialized vessels for the offshore service industry and a wide variety of fishing vessels.

The AWSC has just completed its annual shipyard survey which is designed to develop an accurate profile of the industry which then can be used to identify industry trends for use in the legislative and regulatory areas and which are also useful to the industry.

The 1983 survey indicates that the number of second-tier shipyards has dropped from slightly over 300 to about 250 establishments.

This is not surprising when construction statistics are examined (see Table I).

Of major importance to the shipyard industry is the Jones Act— the singular law responsible for the creation of the inland and coastal barge and towing industry and the offshore service industry.

This nation has long benefitted from these industries which provide low cost water transportation and an offshore service industry which assures our energy independence.

The Jones Act gave rise to a shipbuilding industry which, in our free enterprise system, is efficient, cost-effective, and technologically advanced. In the peak years it has given direct employment to 50,000 people and because of the ripple effect on steel producers, equipment suppliers and various other service industries, it has provided additional employment opportunities for 175,000 people. Every legislative or regulatory attempt to admit foreign built vessels in contravention to the Jones Act, does nothing but weaken the Act's principles and eventually could cause its demise.

The AWSC and its member companies are supportive and dependent on the integrity of the Act, and will continue to vigorously defend it.

On another issue, reform of the Longshoremen's Act may become a reality in 1984. Both the Senate and the House have passed versions of the Longshore Reform Bill, and the differences must now go to Conference Committee. House and Senate staffers are diligently trying to arrive at reasonable compromises.

There are, however, many areas where the bills agree and which go to the heart of the economic problems caused by the 1972 amendments to the Act. Areas of agreement include: a) 5% cap on the annual benefit escalator; b) Repeal of the unrelated death benefit provision; c) A cap on death benefits at 200% of the national average weekly wage conforming it to disability benefits; d) Codification of the Supreme Court's Hillyer decision, precluding fringe benefits from wages in calculating an employee's average weekly wage; e) Imposes an offset for any other worker's compensation or Jones Act benefits received; f) Debarment of medical providers and claim representatives for fraud, raises the penalty for misrepresentation from a misdemeanor to a felony, requires semi-annual reports of outside earnings, and authorizes for filing a fradulent claim; g) Preventing deputy commissioners from speculating on future losses of wage earning capacity; h) Expediting settlements allowing automatic approval of settlement agreements within 30 days where the employee is represented by counsel; i) Prohibiting employees in shipyards from suing their employers in court on some dual capacity theory; j) Excluding clerical, secretarial, data processing and security personnel from the Acts' coverage.

The two most important differences between the House and Senate bills involve jurisdiction and occupational disease. The AWSC has long fought for excluding small shipyards from Longshore Act coverage.

The second tier shipyards are not able to use their facilities for non-maritime construction because the high rates of the Longshore Act make them non-competitive with other steel fabricators.

Highway and bridge construction have increased over 70% in the last year, since the 59c fuel tax came into effect. However small shipyards have not been able to participate in that business or in many other non-maritime steel fabrication jobs because of the Act.

In addition, many shipyards could also become steel service centers if they were not burdened by the Act. Progress is being made prior to conference to find a way to exclude the shops and building areas in shipyards from maritime coverage so that the facilities can be more fully utilized. In addition, progress is also being made on resolving the occupational disease issues. With the difficult issues out of the way, it is hoped that a bill will be passed before Congress adjourns in October 1984.

Longshore Reform will provide shipyards with greater cost control and more flexibility to use their facilities.

Progress is also being made on the development of a vertical standard for the shipbuilding industry.

Two years ago Phase I of the project was completed when OSHA consolidated the three shipyards standards—ship building, shiprepairing, and shipbreaking— into one single standard. The second phase is nearly complete where the appropriate general industry standards will be combined with the shipyard standards thereby producing a vertical standard which contains all the regulations that a shipyard must comply with. Finally, the third and most difficult phase is the revision of the vertical standard so that all regulations will be appropriate for the shipyard environment. This will be undertaken on a section-by-section basis under a review schedule established by OSHA.

In 1980, the AWSC was the recipient of an OSHA New Directions grant. In 1981, the AWSC published the new Employees Safety Training Program, a slide cassette presentation. The funds raised through the sale of the Safety Training Program have enabled the AWSC to become financially self-sufficient to produce additional programs. The AWSC Shipyard Safety Committee will soon embark on the development of a Supervisors Safety Training Program. These programs are wise investments that anticipate recovery in the shipyard industry, and that will be in place once the recovery occurs.

The American Waterways Operators, Inc., and the AWSC, represent a rare alliance for an industry trade association because it combines both the manufacturers and the operators of the equipment.

This coalition reflects the true nature of the maritime industry which is an integrated system composed of several distinct and essential parts: vessel operators, ports and terminals and shipyards. 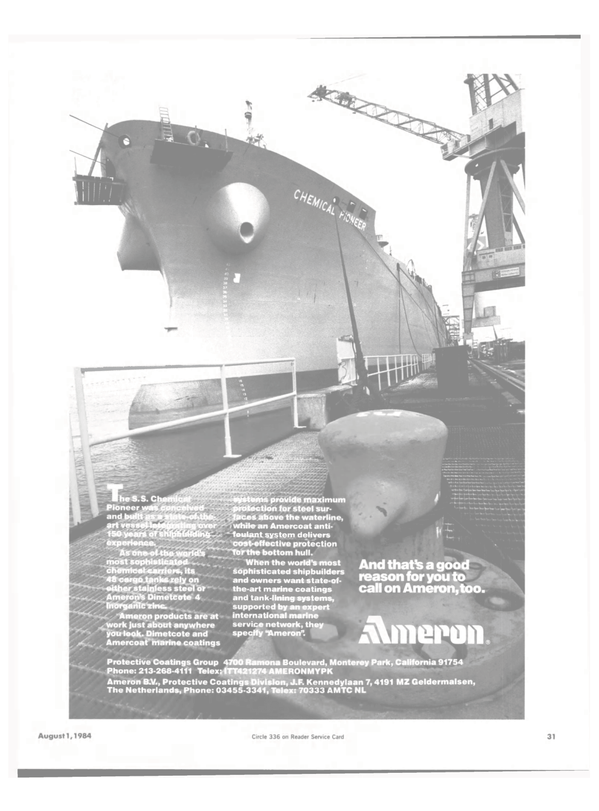 Read AWSC: Legislation And Regulation In The Shipyard Industry in Pdf, Flash or Html5 edition of August 1984 Maritime Reporter