The 57,000-dwt Exxon Baytown was christened in recent ceremonies at Avondale Shipyards, Inc.

near New Orleans. The crude oil carrier was built for Exxon Shipping Company of Houston, and will transport cargoes between U.S.

West and East Coast ports and will also trade in the Caribbean area. Two similarly designed 42,000-dwt multi-product petroleum and chemical carriers, the Exxon Charleston and Exxon Wilmington, were delivered to Exxon Shipping by Avondale during the past year.

Lady Laing of Middlesex, England, wife of Sir Hector Laing, a director of Exxon Corporation, served as the vessel's sponsor.

Others in the christening party were: F.J. larossi, president of Exxon Shipping, and Mrs. larossi; Richard Brunner, senior vice president and senior operating officer of Avondale, and Mrs.

The Exxon Baytown has an overall length of 779 feet 6 inches, beam of 105 feet 10 inches, and draft of 38 feet 5 inches. Main propulsion is provided by a 17,000- bhp Mitsubishi/Sulzer RL90 slowspeed diesel engine. The vessel is capable of carrying up to 459,312 barrels of crude oil in her 14 tanks, which are served by four main cargo pumps. Cargo piping is arranged to permit the carriage of two grades of crude oil simultaneously.

Avondale built the tanker utilizing state-of-the-art techniques for zone outfitting. Large structural modules were extensively outfitted with piping, ductwork, electrical wireways, and equipment prior to being erected at the building site. In addition, many machinery package units and pipe package units were assembled ashore and then lifted aboard.

The Exxon Baytown incorporates the latest safety and envito ronmental protection standards, is heavily automated, has a bow thruster for docking control, and has the most modern satellite navigation and communications equipment available. Slow-speed diesel propulsion and a special hull coating to minimize water resistance are two of the energy-conserving features of the vessel's design.

Avondale Shipyards, located on the Mississippi a short distance upriver from New Orleans, is a wholly owned subsidiary of Ogden Corporation of New York. 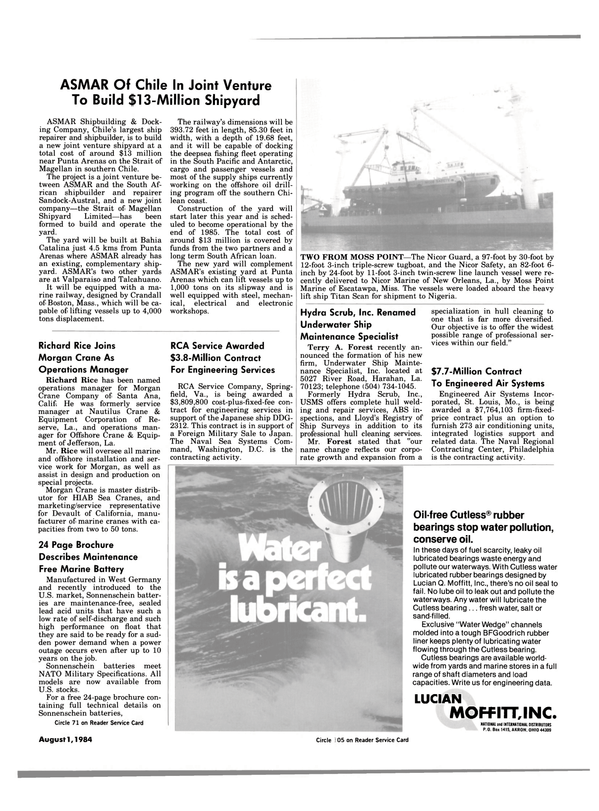