Tipping Over The Pork Barrel

Jeffrey A. Smith, Director of Public Affairs The term "pork barrel" has been part of the American political lexicon for years. William Safire's American Political Dictionary defines it as "A piece of legislation that provides morsels for scores of Congressmen in the form of appropriations for dams and piers, highways and bridges." The phrase probably dates from the pre-Civil War practice of distributing salt pork to slaves from large barrels.

Members of Congress, in their stampede for local appropriations, were likened by the pundits of the day to the field workers rushing the barrel to get their share of the pork. In a Baltimore speech on inflation in 1952, Adlai Stevenson pledged "no pork-barreling while our economy is in its present condition." The old phrase is still with us today, and during recent House debate on the first major water resources construction bill in fourteen years, opponents of the measure were standing in the Well of the House invoking "pork barrel politics!" as a catch-all damnation of the bill. However, after two years of careful planning, comprehensive hearings, and debate, the House passed the omnibus bill that authorizes the repair and replacement of seven critical locks and dams around the nation. The bill also provides for the develop- ment and deepening of ports, flood control, shoreline protection and water supply projects. On its long voyage to the House floor, the bill passed the full House Public Works Committee by a vote of 49-0. Once on the floor, it was approved by an overwhelming vote of 259 in favor, and 33 against. There appeared to be a consensus in the national interest that something needed to be done to rebuild the crumbling infrastructure of the nation. There appeared to be a consensus among our elected representatives that a vital need would be fulfilled.

Yet, the morning after the bill's passage, more than one newspaper carried stories which freely characterized the House as having once again dipped into the "pork barrel" in its legislative deliberations.

On the news pages, the term "pork barrel" was used interchangeably, and wrongly, as a common synonym for "water project." In George Orwell's now-famous essay "Politics and the English Language," he suggests a few reasons why tired, worn out political phrases should be dropped from usage. First of all, phrases such as "pork barrel" pick up such diverse meanings over the years that their usage becomes inaccurate, and therefore misleading. More importantly, such cliches quickly become a writer's easy substitute for careful thought and analysis. When a writer must choose between constructing a carefully crafted paragraph, or getting by with a catchall phrase, the pressure of deadlines and expedience often result in the latter.

The use of such a reference had a place, perhaps, in the political columns of H.L. Mencken, or the musings of Mark Twain, or in a political cartoon depicting rotund politicians dispensing special favors. It has no place, however, on the news pages.

If historic and legitimate concern for maintenance and improvement of the nation's infrastructure— which includes waterway systems—is to be maligned and lumped into a dead cliche, under the guise of serious journalism, then every President and Congress who ever served would have to be counted among the conspirators in the national interest. The development of water resources produces enormous economic and social benefits that extend far beyond the local community.

There are, certainly, many debatable points regarding water resources legislation. For years, the center of controversy over federal water projects has been the question of who will pay what portion of the cost of such projects. This debate is valuable, essential, in the national interest, and is the process by which our federal legislators decide issues of national policy.

I suggest, however, that the term "pork barrel" used in a news story benefits no one, that it has long outlived its usefulness, that it is deceptive, ambiguous, and that like the phrases "know-nothing party," "Tammany Hall," "Smokefilled Room," and anything with the suffix" . . . . gate," should be relegated to the dustbin, where they belong. 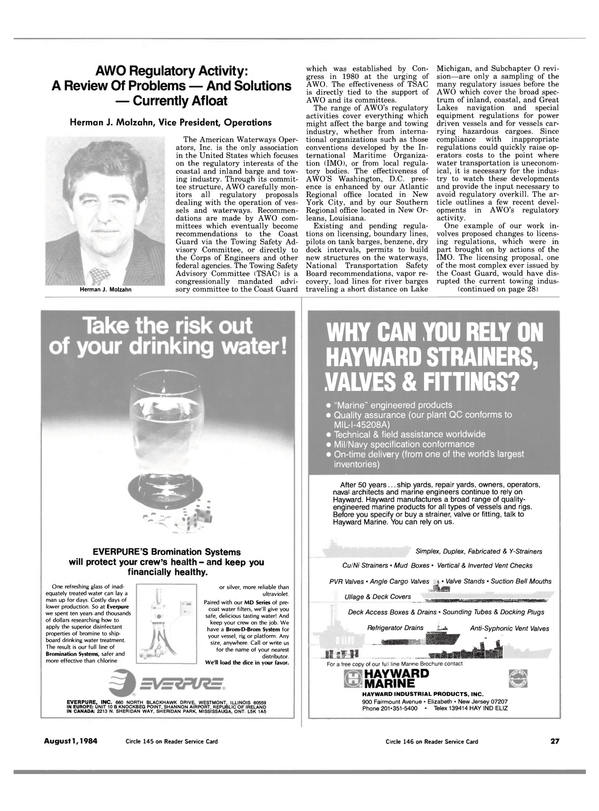 Read Tipping Over The Pork Barrel in Pdf, Flash or Html5 edition of August 1984 Maritime Reporter