AWO Elects Creelman Chairman Of The Board

The board of directors of The American Waterways Operators, Inc. has elected William A. Creelman to serve as its chairman of the board. Mr. Creelman, who is president of National Marine Service Incorporated of St. Louis, Mo., will be completing the unexpired term of Archie L. Wilson, which began March 20, 1984. Mr. Wilson who is the president of Dixie Carriers, Inc. of Houston, Texas resigned as AWO chairman due to health reasons.

Immediately after his graduation from the U.S. Merchant Marine Academy in Kings Point, N.Y., Mr. Creelman served as a licensed deck officer aboard oceangoing vessels. Subsequently, he began his career with National Marine serving as a first class federal pilot aboard the company's coastal tankers. During the past 30 years, Mr. Creelman has served in various capacities at National Marine, including work in the areas of traffic, operations, insurance and administrative functions.

In 1982, he was named president of National Marine, a principal transporter of bulk liquids on the inland waterway system.

Prior to his election as AWO Chairman, Mr. Creelman had been serving as vice chairman of the Coast Guard's Towing Safety Advisory Committee. Throughout his maritime career, he has served in leadership positions including membership on such panels as the Coast Guard's Chemical Transportation Advisory Committee, the Western Rivers Technical Committee of the American Bureau of Shipping and has been active in The Society of Naval Architects and Marine Engineers.

Working alongside Mr. Creelman for the remainder of his term, which expires next March, is AWO vice chairman of the board James H. Sanborn. A graduate of the U.S. Merchant Marine Academy, Mr. Sanborn is vice president-operations of Sonat Marine Inc., Philadelphia, Pa. He holds an MBA from the University of Pennsylvania's Wharton School of Business. 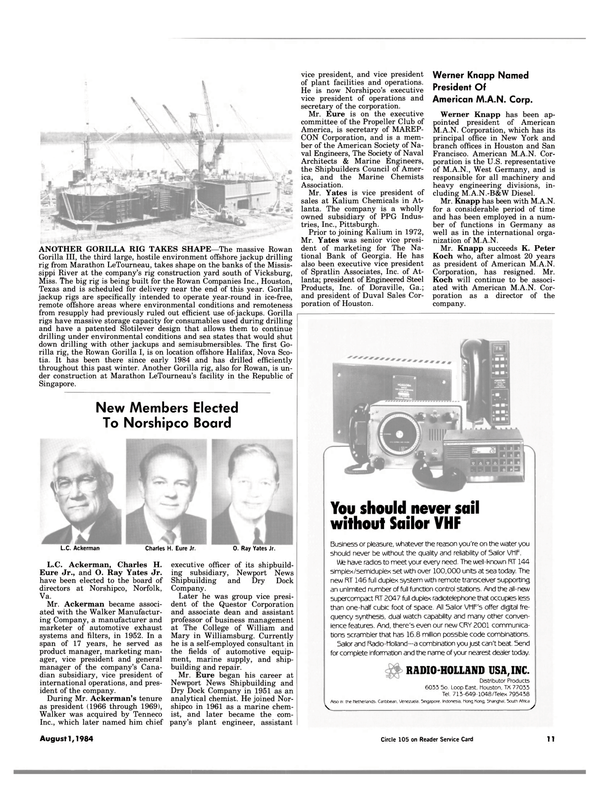 Read AWO Elects Creelman Chairman Of The Board in Pdf, Flash or Html5 edition of August 1984 Maritime Reporter