Tracor Marine of Port Everglades, Fla., a subsidiary of Tracor, Inc., has received a contract that will bring the company $6 million over the next 12 months from Transoceanic Cable Ship Company, Inc., a wholly owned subsidiary of AT&T. The award was announced by William C.

The contract calls for major conversion of Transoceanic's newly acquired cable ship Salernum. The 340-foot vessel was purchased from the Italian shipping firm of Fratelli dAmico Amatori for a reported $7 million, and recently completed the transit from Naples to the Tracor Marine shipyard.

The conversion is required in order to qualify the ship for U.S.- flag registry, as well as to enable her to meet U.S. Coast Guard engineering and safety standards.

The vessel will undergo major ren renovation of the habitable areas, and the electrical system will be converted from dc to ac.

Upon completion of the project, home port of the Salernum will be Honolulu, and the Port of Registry will be New York. The vessel will assume cable-repair and cable-laying duties in the Hawaiian Islands.

A standby crew of 20 will expand to 50 during active duty.

The Tracor Marine facility at Port Everglades is headquarters for the Shipyard and Ocean Technology Engineering divisions. The full-service shipyard is equipped for the overhaul, conversion, and repair of government and commercial vessels.

Among the capabilities offered by the oceanographers, naval architects, and engineers of the Ocean Technology Division are marine design and engineering, including fabrication and installation of underwater systems; detailed marine surveys; program management; and cable laying. In addition, a Marine Services Division of Tracor Marine maintains facilities in Chesapeake, Va., where marine engineering and ship repair work, diving and underwater services, ship and aircraft salvage, and industrial fabrication are provided for the marine industry in the Norfolk/ Tidewater area.

Tracor, Inc. is an international technological products and services company with headquarters in Austin, Texas. 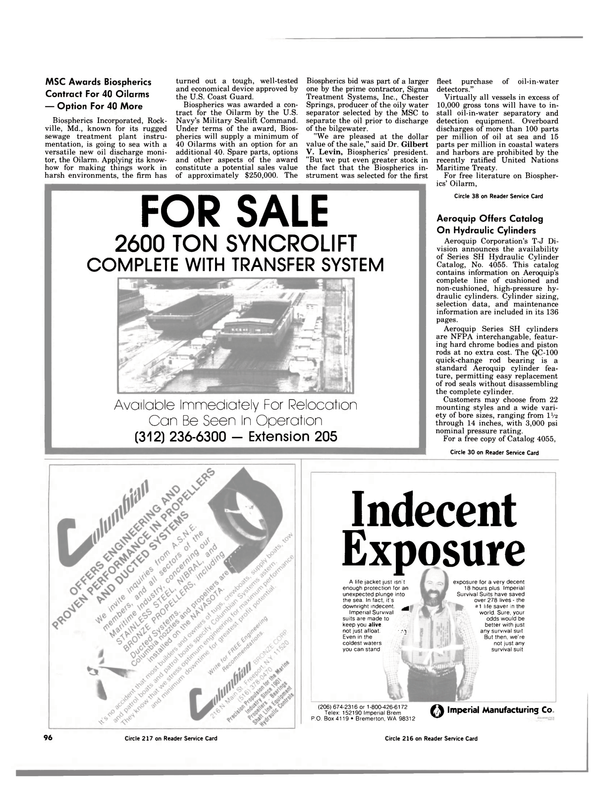