Houston, Texas — April 25—27 The Third Annual National Maritime Show and Conference will be held at the Albert Thomas Convention and Exhibition Center in Houston on April 25-27, 1984.

Held previously in Baltimore in 1982 and 1983, the show's new location will provide exhibiting companies with access to a broad-based spectrum of clients available to the maritime industry. Houston is the third largest port in the United States and is the oil capital of the world. The state of Texas is home to more than 2,500 marine companies and some 85 shipbuilding and repair facilities.

The National Maritime Show covers the complete maritime market from tugboats to tankers and containerships, inland and offshore vessels, drilling rigs and support vessels, as well as Navy, Coast Guard and other specialty ships.

The show is managed by Industrial Presentations, Inc. of Houston, a company that has presented major trade exhibitions throughout the world for more than 20 years, including 25 events held in North America, Europe, and the Far East. The company maintains branch offices in Denver, London, Rotterdam, Singapore, and Sydney.

Over the past few years Houston has hosted many successful events for the maritime and offshore industries, and has emerged as the hub for many international industries and headquarters for numerous multinational corporations. The city is easily accessible from all major centers in North America, and many international airlines offer direct service from Europe and South America.

The Conference that accompanies the National Maritime Show will open with a general session of forecasts and trends in the maritime industry, as well as the state of the art in propulsion, electronics, communications, and navigation.

In addition, other sessions will cover offshore equipment and services; port equipment, construction, and maintenance; shipyard productivity and high technology; diving and salvage; and shipping operations.

More than 100 manufacturers and suppliers will display a wide range of products and services at the Albert Thomas Exhibition Center. 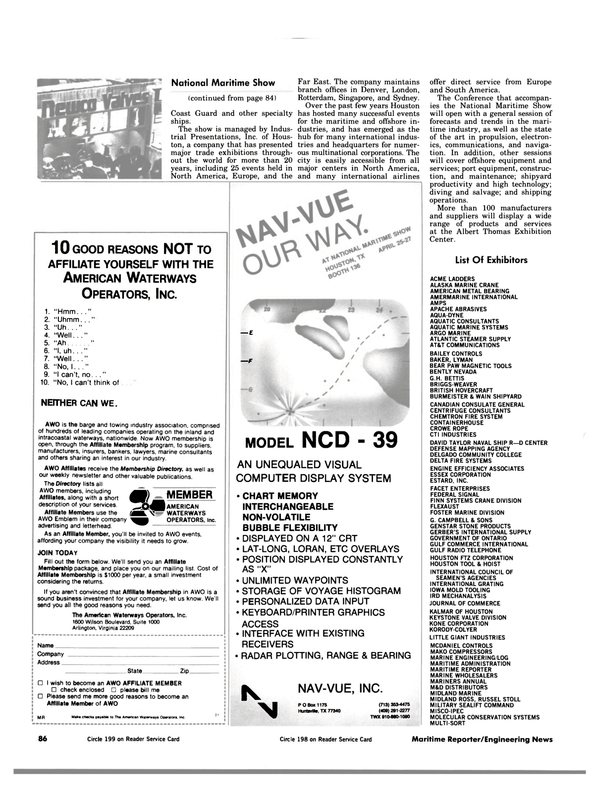