The Morgan City, La., yard of Swiftships, Inc. recently delivered to the U.S. Navy three 65-foot, allaluminum patrol vessels. These boats were then presented by the Naval Sea Systems Command representative to the Governments of Antigua, Dominica, and St. Lucia for service in those West Indies nations.

Lt. Com. Wayne K. Gibson, U.S. Coast Guard liaison officer, Military Liaison Office Barbados, and coordinator for the project Technical Assistance Field Team, explained that he and his nine Coast Guard personnel would accompany the 18 West Indies personnel to their appointed destinations, acting in a advisory capacity on the trip. The West Indies crews spent four weeks at the shipyard training as part of the contract.

The Morgan City yard has accommodations for 18 persons, which includes two single staterooms for senior officers and two bunkrooms, each outfitted to sleep 18 personnel.

The facility is equipped with a full kitchen and dining/training room.

The Coast Guard program includes a one-year training program in the West Indies nations upon the vessels' arrival. Lt. Com.

Gibson stated that the vessels demonstrated quality design and workmanship, and were "a shining example of American industry." He said the boats would be put to work immediately after reaching their destinations, and would be a valuable asset in rescue and patrol operations.

With a beam of 18 feet 4 inches, depth of 10 feet, and full-load draft of 5 feet, each vessel is powered by twin GM Detroit Diesel 12V71TI engines producing a total of 675 bhp to drive two Columbian crewboat propellers through Twin Disc MG514C reverse/reduction gears.

Electrical needs are served by a 20-kw Detroit Diesel/International Electric generator set. The main engines, gears, and genset were supplied by Stewart & Stephenson.

Swiftships president Jerry Hoffpauir said that these are the type vessels that have established his company as a leader in the partol boat field. Swiftships has long been known for its fast aluminum patrol craft ranging in size from 28 to 150 feet, and used by the U.S. armed forces, and naval, coast guard, and police forces is some 20 countries throughout the world.

At present, the shipyard is in the completion stages of vessels for Venezuela, El Salvador, and Dominican Republic.

In addition to its construction and logistic support capabilities, Swiftships provides retrofit and repair services both in the U.S. and overseas. 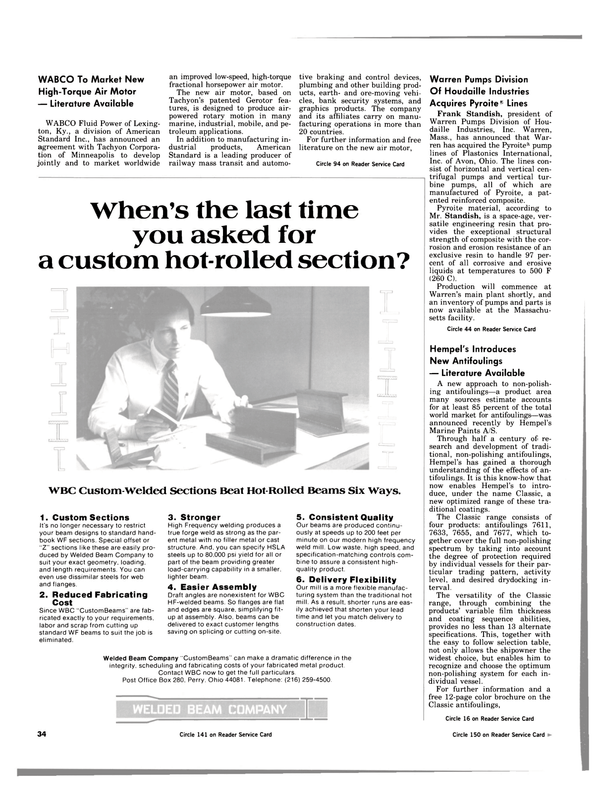