The remainder, three vessels totaling 3,900 gt, were on order or under construction for nongovernment organizations.

The three vessels were a drydock for Allied Shipbuilders' own account, a scallop dragger at Pictou Industries, and an offshore support vessel, virtually completed, built on speculation at Marystown Shipyard.

At the end of 1985 there were still some 14 ships being built under the federal government's 1983 Special Recovery Capital Projects program for the Canadian Coast Guard and Fisheries and Oceans. This program has kept most of the Canadian shipyards in new construction during the past two years, but the work is coming to an end. By late summer this year only two vessels will remain to be completed. By the end of 1986, the only other new work in hand will be the Canadian Patrol Frigates and the second Caribou type ferry for CN Marine at Versatile Davie; that contract was awarded in April this year.

Other government work is pending, including the Polar 8 icebreaker, four submarines under the Canadian Submarine Acquisition Project, about C$100 million for small warships, the Tribal Class destroyer refit and modernization project, and the second batch of Canadian patrol frigates. Most of these programs were scheduled for approval in 1984 or 1985; the go-ahead notices will be warmly welcomed when they are announced.

Reflecting the decrease in demand, foreign-built vessels brought into Canadian registry fell off sharply in 1985—only seven ships totaling 8,233 gt against 18 ships totaling 235,975 gt in 1984. The CSSRA, following its semiannual General Meeting in November 1985, called on the Canadian government to announce a moratorium on all foreign-built vessels being brought into Canadian registry. This would insure that the present meager Canadian domestic demand remains in Canada. The Association also called on the government to honor its preelection promises, including the reimposition of duty on foreign-built fishing vessels over 100 feet, and concessionary financing for Canadian ships in domestic service.

Repairs and conversions in 1985 for government account were maintained at recent levels. Commercial repairs and conversions, however, decreased by 14 percent from 1984, and at C$131,204,000 was the lowest since 1978. This is a reflection of the shipping industry's financial difficulties worldwide. The outlook for the repair industry in 1986, both commercial and government, is clouded by the government's decision to allocate work previously done in commercial yards to the Naval Ship Repair Units in Halifax and Esquimalt. The CSSRA believes this practice is in direct conflict with the government's policy to privatize government operations.

Most of the Allied Industries members of the CSSRA have experienced a decline in work, with the exception of those involved in supplying components or services for the Canadian Patrol Frigate program.

There are now a record 85 Allied Industries members in the Association. Value of production for these members increased 3.8 percent during the past year; much of this production was for naval programs.

In recent months, substantial government intervention and support through grants, low-interest loans, quotas, and tax breaks has been provided to the banking and fishing industries, the wheat farmers, the automobile industry, and the petroleum industry. In some cases, the government has justified this support by saying that the survival of these industries was in jeopardy because of low-cost subsidized competition from abroad. The Canadian shipbuilding industry's future is subject to similar forces, and has been for the past several years. The CSSRA feels that it too merits attention and action, and urges the government to: • Impose a moratorium on ship imports for domestic use; • Introduce concessionary financing for Canadian domestic ships; • Apply 25 percent tariff on fishing vessels over 100 feet; and • Accelerate naval programs and the Polar icebreaker program. 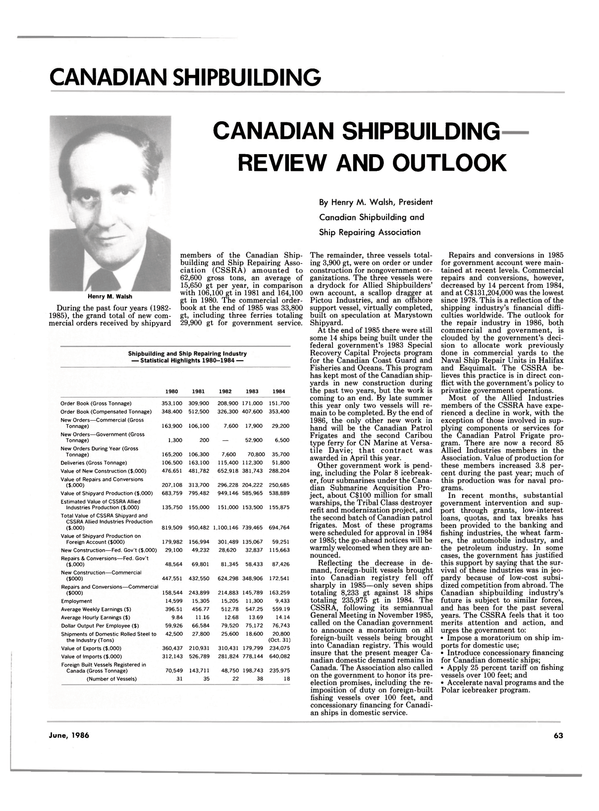