—Brochure Available—Since becoming part of the worldwide Ulstein Group in 1984, Ulstein Maritime has achieved major success in areas outside their traditional North American market. Recent orders received include two 2,000- hp Z-Drives for McTay Shipyards in the U.K., to be installed in a coastal tug; two 1,000-hp Z-Drives for a ferry being constructed at Eglo Shipyard in South Australia for operation out of Adelaide (through Hawker Siddeley, Australia); and four 800-hp Z-Drives for Indonesia.

In North America orders for five 1,500-hp deck-mounted Z-Drives for dredges have recently been received.

Two were commissioned in December on the dredge Newport.

The U.S. Navy continues to be a major customer, a 1,200-hp D.C.- driven thruster was commissioned on the MSC Observation Island, and six 500-hp diesel drive deckmounted unit packages are on order for propulsion of U.S. Navy crane barges.

The Strut Drive non-steerable, right-angled drive unit for highspeed vessels with power up to 650 hp, under development for the last three years, is receiving acceptance for crew and pilot boats, but is being more widely applied in the large luxury yacht market due to its unique features. The latest installation is a high-speed passenger vessel running from North Vancouver to the Expo 86 site. Sparkman and Stephens, the world-famous yacht designers, have specified the MC- 500 Strut Drive in the new Stevens Custom 58, of which two vessels are on order.

The company reports it has a strong team of design engineers to ensure that Ulstein Maritime keeps in the forefront of technology, both for Z-Drives and its control systems.

Ulstein Maritime has also manufactured major portions of the Ulstein controllable-pitch propeller systems on a number of projects, including two 1,500-hp systems for the retrofit of the Canadian Coast Guard vessel Narwhal being constructed in Halifax. Controllablepitch tunnel thrusters were commissioned on the Canadian Coast Guard vessel Samuel Risley, and the Department of Fisheries and Oceans vessel Leonard J. Cowley.

The first of six Ulstein Maritimedesigned fixed-pitch thrusters for Canadian Coast Guard 1100 vessels was commissioned on the Martha L.

From the above-mentioned successes, it is clear that Ulstein Maritime has considerably expanded its marketing areas, its product ranges and customer acceptance. 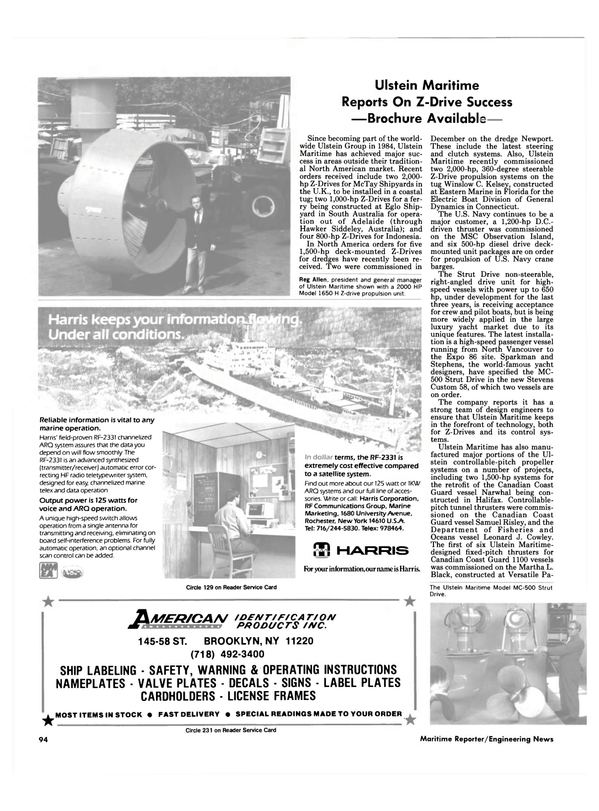