Negotiations are taking place between the Provincial Government of Nova Scotia, Canada, the new owner of Good People Sea and Shore Services repair yard, aimed at modernizing the 150-year-old facility, including increasing its hauling capacity from 350 to 1,200 tons.

The repair yard is located in North Sydney Harbour, Cape Breton, Nova Scotia. North Sydney is the main ferry link to Canada's 10th province, Newfoundland, and also has a regular service to the French Islands of St. Pierre et Miquelon. It is also the East Coast start of the Trans-Canada Highway.

The shipyard has been purchased by a group headed by Dory Tuvim of Montreal, with intentions of establishing an offshore-related facility to serve the promising fields off the coasts of Nova Scotia (Venture) and Newfoundland (Hibernia).

While oil markets stabilize and these oil fields become operational, the company has turned to the traditional customers—the many fishing fleets operating around Cape Breton and Newfoundland.

The antiquated slipway at the Good People yard, with its 350-toncapacity cradle, will be replaced with a shiplift of approximately 1,200 tons capacity. A new transfer system will also be installed, permitting vessels to be moved into a building for year-round refit and repairs.

The present water basin will be back-filled, doubling the yard's area from three to six acres. The machine shop will be completely modernized, a fueling station activated, and a haulway for smaller vessels and yachts installed.

For further information on this North Sydney shipyard, Circle 34 on Reader Service Card 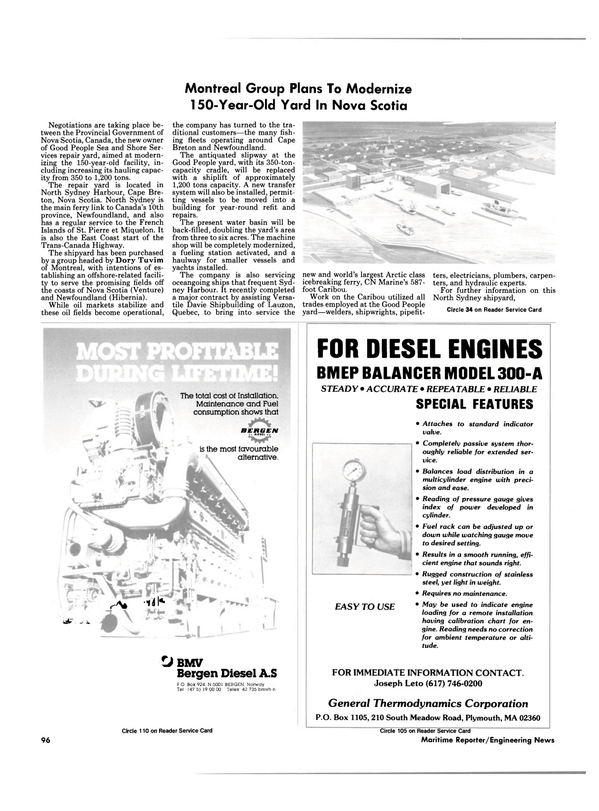