The number of high-speed, round trips available to ferry commuters in South Boston suburbs increased by 40 percent recently with the addition of a 100-foot, 150-passenger ferry boat to the Boston Harbor Commuter Service fleet.

The "new" boat, the Sterling, is actually a converted 30-MPH allaluminum crewboat built in 1980 for the rapid transport of personnel and cargo to offshore rigs in the Gulf of Mexico. Aluminum Boats, Inc., successor the vessel's builder, Camcraft, Inc., performed the conversion at its shipyard in Crown Point, La., a New Orleans suburb.

Dana Goodell, president of Boston Harbor Commuter Service, said the Sterling can make the 9.8- mile run from its berth at the old Hingham Shipyard to Rowes Wharf in downtown Boston in just under 30 minutes. He added that some older, slower vessels now take between 45 and 60 minutes to make the same trip.

"We chose to convert a crewboat rather than build a new ferry because the economics are perfect," said Mr. Goodell. "Right now there are many excellent, hardly used crewboats available at low prices because of decreased offshore oil and gas activity. Crewboats are designed and built tougher than ferries because they operate in open seas and have to withstand pounding against rigs while loading and unloading people and cargoes in rough seas. They are faster because they have to cover greater distances than ferries and the rig crews they carry are paid full wages during transit. They can work year round and have no problems with the high winds and ice in the Boston harbor." The main cabin of the rebuilt boat, which can seat 80, features rows of two seats each separated by wide aisles, much like those on jumbo jets. All inside seats are cushioned, and are 2 inches wider than regular seats for additional comfort.

This level also features a small galley which serves coffee and doughnuts in the morning and cocktails in the afternoon.

Below the main deck is another level with similar seating for 39 along with a lounge and tables for those who wish to play cards or work. The outer, upper deck is certified for 100 commuters or whale watchers as the boat is available for private parties and charter. Inside seats are easily removed to provide additional space for a band and dance floor for receptions.

"It's easy for passengers to work, play cards, and eat and drink on this boat," said Mr. Goodell, "because of all the ferry boats I know, this one gives the smoothest ride and the most stability under way. It's also the quietest because its new underwater exhaust system greatly reduces the noise level inside the boat." The transition from crewboat to ferry boat required a 47-foot extension of the main cabin over the aft deck; removal of the captain's stateroom, crew quarters (except two bunks and shower), and galley in the lower compartment; installation of new flooring, ceiling, bulkheads and paneling; installation of lounge seats and coffee tables; removal of the air cooling system and bolstering of the heating system; installation of thermal windows; and conversion to an underwater exhaust system.

In a refreshing return to the uncomplicated business practices of the past, all of the $200,000-plus modification work was accomplished by a handshake of the two principals, Mr. Goodell, and Salvador Guarino, president of Aluminum Boats, Inc.

"They (Aluminum Boats, Inc.) converted another crewboat, the Chimera, for us in early 1984," said Mr. Goodell. "We put them on really tight deadlines, like 90 days from start to finish, and both boats were ready on the requested delivery dates. If Sal (Guarino) says something will be done, you can bank on it, and his workmanship is 100 percent." The Sterling was originally the Sterling Fryou, which was built in 1980 for Briley Marine Service of Morgan City, La. She served that company for 15 months in the Gulf of Mexico. The ferry is 100 feet in length, with a 24-foot beam, and 5- foot draft. She is powered by two Detroit Diesel 12V71TI diesel en- gines developing 510 HP each at 2,100 rpm. Power for the ship's electrical and other systems is generated by two 40-kw Detroit Diesel 371 engines with Delco generators.

All of the vessel's communications and navigation equipment was retained including its two radars and aft control station.

The Boston Harbor Commuter Service operates under the aegis of the Massachusetts State Water Transportation System and the Mass. Bay Transit Authority. The fleet now totals four ferries, increasing the number of daily round trips from 10 to 14. The company serves about 1,200 commuters daily and approximately 1,600 during peak summer periods. A one-way trip is $3 which includes all-day parking at the ferry landing at Hingham. Daily parking rates in Boston range from $3 to $15.

For further information on services and facilities offered by Aluminum Boats, Circle 31 on Reader Service Card 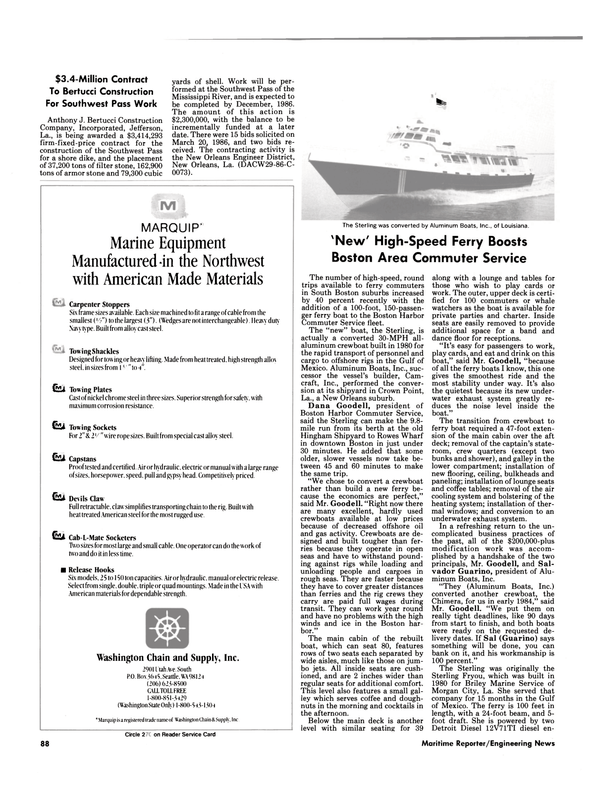