Thomas Jefferson's familiar axiom that "Eternal vigilance is the price of liberty" has an analogous meaning beyond its historical and national value to American industrial sectors exposed to the often severe impact of federal government regulations. With apologies to our third President, the marine industry's variation on Mr. Jefferson's theme has long been that "Eternal vigilance in the regulatroy process is the price of protecting our future." It was then that the marine industry joined American industry as a whole in breathing a collective sigh of relief with the advent of the Reagan Administration philosophy that less governmental regulation would be the standard of the 1980s. Coming as it did on the heels of what seemed to be a sustained federal effort to solve all of society's perceived ills through additional regulation, the Reagan Administration commitment to less government intervention was greeted warmly by most sectors of the American economy.

Indeed, there was considerable hope that this new policy would lead not only to a lessened volume of regulation, but also to more rational regulation in those areas where government oversight genuinely would serve the public interest.

Five years after the institution of this policy, at least two questions appear to be salient regarding federal regulations affecting the maritime industry. First, how well has the Administration's commitment to less government been tangibly translated into a lesser volume and more reasoned set of regulatory proposals?

Second, has the Administration's laissez faire policy made obsolete the marine industry's watchstanding requirement of "eternal vigilance?" For the marine industry at least, the torrential downpour of federal regulatory proposals has indeed lessened somewhat in the past five years. That probably is true for most other industrial sectors as well.

The most tactile manifestation comes in the form of a physically leaner Federal Register than that which industry had become accustomed to in the 1970's. The Administration policy of less government intervention has also trickled down into the agencies, dampening what had been an ardent zeal to regulate.

Furthermore, there are encouraging signs that some federal regulators have come to understand that government regulation is not always the only, or even the most appropriate means to address the particular concern at hand. It is also fair to say that there is an increased awareness within the federal agencies that government regulations do have serious bottom-line impacts on those regulated, and that regulations should seek to achieve the objective of serving the public interest without creating economic havoc in the process.

Notwithstanding a Federal Register of somewhat diminshed girth, the impertive of "eternal vigilance" is as critical today as at any time in the past. For even in an Administration committed to less government intervention and the ascendancy of free market forces, the danger of regulatory overkill continues to be ominously real.

The most recent example of the federal regulatory excess that many had hoped to be a thing of the past emerged from the U.S. Environmental Protection Agency (EPA) late in 1985. On November 29, the EPA proposed to amend the hazardous waste management regulations under the Resource Conservation and Recovery Act (RCRA) by listing all used oil as a hazardous waste. The basis for this far-reaching proposal is an EPA determination that used oil "typically and frequently" contains significant quantities of contaminants "which would pose a substantial hazard to human health and the environment, if improperly managed." On its face, the proposal and its rationale appear to constitute a reasonable governmental response designed to protect the American populous from a prevailing danger. However, closer examination reveals a proposal which contains all of the classic characteristics of regulatory overkill.

First, consider that in response to the instruction of Congress that EPA evaluate those types of used oil which should be identified and listed as hazardous wastes, EPA fired a blunderbuss, declaring all used oil, irrespective of its source, to be hazardous. This approach is particularly egregious to marine interests, who found in examining EPA's analysis of used oil samples that, although the marine industry was indentified as one of twelve major industrial sectors generating used oil, the study failed to examine any meaningful quantities of used oil generated by marine sources. Indeed, the EPA study on which the used oil proposal is based could only identify 40 percent of the samples analyzed as to their general source, i.e., automotive or industrial. The sources of the remaining 60 percent of the samples analyzed are completely unidentified, and unknown to EPA. The industry's concern with the inadequacy of the analysis on which the proposal is based has been further heightened by recent reports in the trade press which indicate that EPA chose the carte blanche listing option, without ever considering alternatives, after an internal determination that the analyses needed to identify hazardous used oil by category were "too timeconsuming." Building on the foundation of this flaccid sampling base, the Agency proposal includes a second characteristic common to examples of regulatory excess: making a blanket presumption of guilt, and then shifting the burden of proof to those who have been presumed guilty and are therefore made subject to the regulation. Vessel operators who have used oil that is not hazardous, and who seek to avoid being mired in this regulatory swamp, would be required to engage in a lengthy "delisting" procedure, while, ironically, the criteria for achieving delisting have not yet been specified by EPA.

As is usually the case with proposals of this type, the industry concerns expressed extend not only to the analysis on which the proposal is based or the approach which the Agency elects to pursue, but also address the potential for profound impacts. The EPA used oil proposal would establish broad areas of wrongful regulatory trespassing on international maritime conventions and U.S. Coast Guard regulations which already govern used oil generated by vessels. The proposal also dismisses as a "perception problem" the intensely negative commercial and environmental impacts of subjecting vessel operators to the draconian joint and several liability provisions of the Comprehensive Environmental Response, Compensation and Liability Act (Superfund), and fails to consider, the attendant effect on the operator's ability to secure insurance coverage.

Such insensitivity to the impact of its provisions on those regulated is unfortunately also often characteristic of proposals which overstep the bounds of regulatory reason and common sense.

A final characteristic common to proposals which lean toward regulatory excess is their frequent failure to genuinely serve the public interest.

The EPA used oil proposal also fits the mold in this regard by establishing a regulatory regime which will have the clear effect of discouraging the optimal management of used oil through recycling. The simple maxim of recycling economics is that the recycled product is only viable if it is a less expensive substitute than the virgin product. EPA proposes to establish a regulatory system which is sure to deal a rabbit punch to the used oil recycling market.

Needless to say, the EPA proposal has been the cause for well founded concern among all segments of the U.S. maritime industry, and for that matter, within most U.S. industrial sectors as well. A broad-based effort is underway to amend it before its promulgation as a permanent and final regulation.

However, in the broader context the EPA proposal serves as a vivid reminder that even in a more reasoned regulatory environment, the threat of regulatory excess is always clear and present. For that reason, the maritime industry's variation on President Jefferson's "eternal vigilance" theme continues to be timely and sage advice. Keep watch. 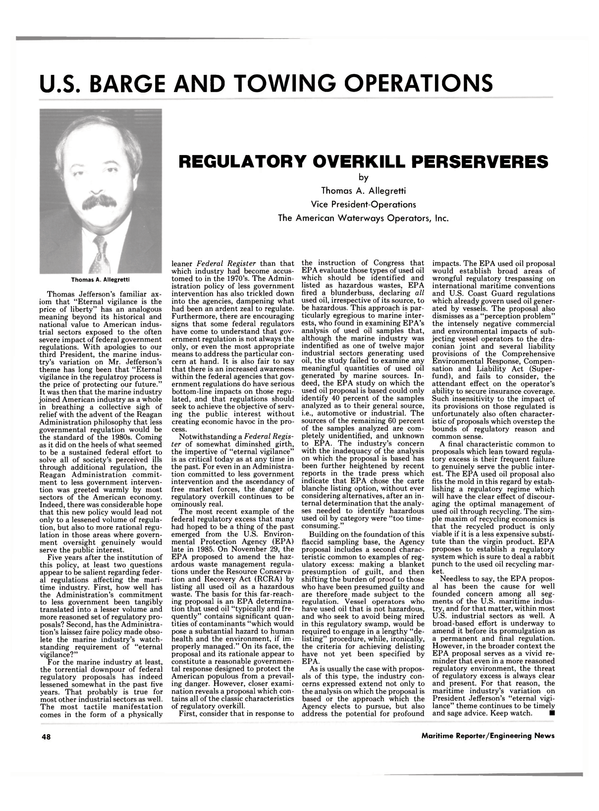