The Marine Society of the City of New York recently held its 216th consecutive Annual Dinner, at the Plaza Hotel. Throughout its long history, the Society has honored persons in the maritime community who have contributed their time, talent, and expertise. This year's guest of honor and principal speaker was Robert F. Cahill, executive vice president of the Statue of Liberty- Ellis Island Foundation Inc., the group responsible for the restorations.

Prior to joining the Foundation, Mr. Cahill was executive vice presi- dent-operations for the GTE Communications Group in McLean, Va.

He spent 26 years with GTE in a number of managerial positions dealing with operations and finance, both internationally and domestically.

He was directly responsible for the sales of the GTE Consumer Products Group to corporations in Europe, Latin America, the Far East, and the U.S.

Chartered in 1770 by King George III, the Marine Society is a charitable and educational society, the regular membership being composed entirely of shipmasters who must be, or have been, captains of merchant vessels under the U.S. flag.

George Washington, who joined in 1783.

The Society has endeavored to improve maritime knowledge, and it has relieved, insofar as possible, the needs of more than 5,000 distressed shipmasters, and their widows and orphans. 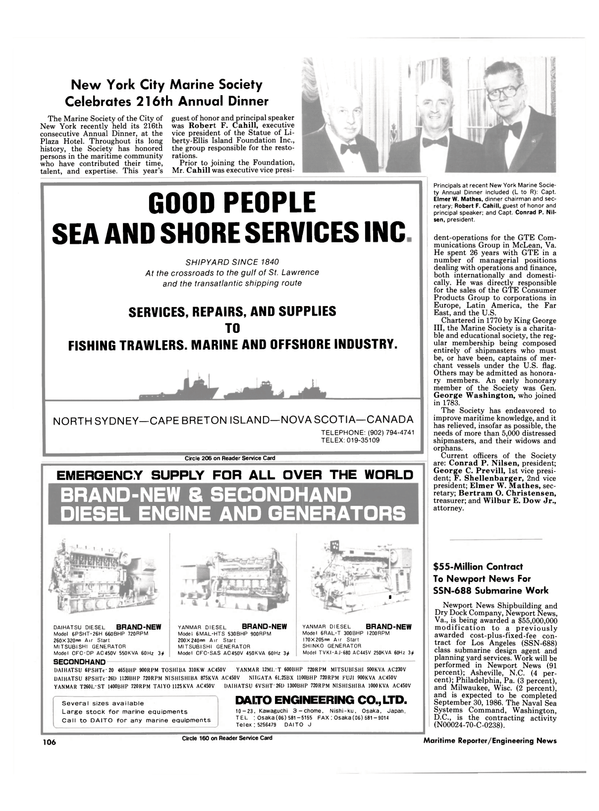