U.S. SHIPBUILDING INDUSTRY HAS MADE GREAT STRIDES IN IMPROVING EFFICIENCY AND REDUCING COSTS

A MESSAGE FROM THE CHAIRMAN OF THE SHIPBUILDERS COUNCIL OF AMERICA The year 1985 witnessed the continued resurgence of the United States as the world's foremost naval power. Measured by any yardstick, the Navy should meet its 600-ship goal by the end of this decade. President Reagan, Secretary of Defense Caspar W. Weinberger, and Secretary of the Navy John F.

Lehman Jr. are to be commended for their steadfastness in sticking to this objective.

The advent of Gramm/Rudman/ Hollings, with its laudable end of reducing and ultimately eliminating the huge federal budget deficit, means that reductions in defense spending likely will be necessary.

The Navy will be asked to bear an equitable share of the burden. However, these cuts must be judiciously made so as to not jeopardize the hard-earned improvements made in the size, structure, and capability of the fleet. Indeed, the task of sustaining the Navy at adequate levels is as important as building the 600- ship Navy in the first place.

We as shipbuilders recognize that we must increase productivity and minimize waste to offset the budget reductions in the next few years.

Measurable progress has been achieved. The initial congressional focus of fraud, waste, and abuse in the defense industry caused contractors to reexamine internal management procedures and controls and our business relationships and responsibilities, and implement changes where appropriate. It is important to understand, however, that excessive imposition of rules, audits, and law upon the defense industry can complicate the procurement process, increase costs, delay schedules, and impair the quality of the end product.

In March (1985), I wrote to various senior members of the Reagan Administration to express our concern that unless more positive and supportive actions were taken, the decline of the capability and capacity of the shipbuilding and ship repair industry would continue beyond the dangerously low levels then existing. Most notable among the replies received was that from Defense Secretary Weinberger.

His reply contained the following: "We in Defense agree that the Nation must take steps to revitalize our maritime industry if we are to have sufficient capacity and capability to meet our mobilization requirements.

The Navy's current and planned shipbuilding and repair programs are, by themselves, insufficient to support the Nation's present shipyards at an efficient level of production. Moreover, a further decline in the number of shipyards would reduce the competitive base for these essential Navy programs.

Clearly what is needed is a revitalization of the commercial segment of the maritime industry." Also in March, I met with Senator Ted Stevens, chairman of the Senate Merchant Marine Subcommittee, to urge that he undertake a leadership role in the development of some form of maritime legislation to fill the void that exists in maritime policy as related to shipbuilding and ship repair, and pledged that the shipbuilding industry would actively support and participate in such efforts. His response was that he, together with his colleague Senator Daniel K. Inouye, believed that their active involvement in working directly with the senior leaders of the industry could produce positive initiatives, and that he and Senator Inouye were prepared to undertake the difficult work required.

As the year progressed, it became very clear that there would be almost no commercial shipbuilding opportunities, and that the Navy shipbuilding and ship repair programs would not provide replacement business as the backlog of Tship programs approached completion.

Indeed, at year-end the Navy programs on the basis of funds authorized and appropriated by the Congress, exhibited negative growth. Thus, the decline in the national level of ship construction and repair was destined to continue.

In August the Bennett-Warner Commission, created but unfunded by the prior Congress and charged with studying and recommending solutions to the national security aspect of the problems confronting the maritime industry, was funded by the Congress. It is clear that the Commission was created by the Congress as a result of its frustration caused by inaction in developing a sound and balanced maritime program. Yet, as this message is written, the five public sector members of the Commission have not been formally nominated. Although staff has been assigned and is at work, the Commission still lacks leadership and direction. We in the shipbuilding industry hope that the actions necessary to implement the Commission are taken promptly, because we are well aware of the immensity of the tasks that lie before it and the limited time provided to carry out the mandate of the Congress.

As I have previously stated, the shipbuilding industry has made great strides in improving its efficiency and in reducing costs related to shipbuilding and ship repair. Not only have shipyards performed well, but suppliers have also worked hard to achieve these goals. We were pleased when Secretary of the Navy Lehman stated that the shipbuilding industry had become the most reliable and cost-effective of the Navy's c o n t r a c t o r s — a n d we pledged to him that the industry will continue this performance.

It is obvious that the shipbuilding industry working alone cannot succeed.

Continuation of the past few years' performance requires understanding, support, and equally effective management by the Navy and the other government representatives with whom we must interface in carrying out shipbulding and ship repair contracts. Despite this need, it is apparent that more adversary relationships are developing between some contractors and the government. As a consequence, both time and cost are frequently sacrificed in an effort to satisfy Congressional critics of the defense industry.

On a positive note, a vital and important first step to build more ships has been taken. Under the able leadership of Senator Stevens and with the support of many others in both Houses of the Congress, funding for a new shipbuilding program, "Build and Charter," was provided in the Continuing Resolution passed in December. That program is subject to development and enactment of authorizing legislation— hopefully in 1986.

The program is only possible because of funds saved by the shipbuilding industry's performance under past Navy contracts. We understand that the concept does not constitute a fully developed maritime plan, and that much remains to be done even after implementation. It is equally clear that the development of authorizing legislation will be no easy task. It is apparent, however, that "Build and Charter" enjoys broader industry support than many other commercial shipbuilding programs suggested in the past, and it is not a subsidy despite what critics may allege.

We are determined to carry on our efforts to develop this meaningful "Build and Charter" program that will provide vitally needed national security assets and enhance this country's commercial viability at the same time. 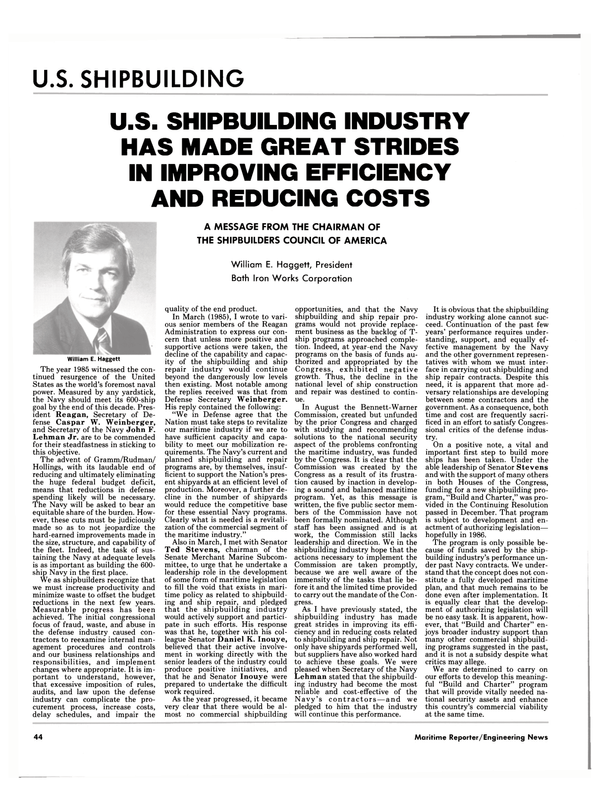