It is said of the mythical figure Damocles that he was forced to take his meals, his head bent precariously over his plate, with a sharp sword suspended above his head—that cruel instrument held aloft by a thread the width of a single hair.

Sad to say, America's inland and coastal water carriers, now mired in the fourth year of a deep and widening depression cast off, when they are fortunate enough to get their hands on enough freight to justify the excursion, under a latter-day sword of Damocles. This weapon is wielded by the very government which should, but does not, have a coherent transporation policy to promote competition through equitable, consistent and non-disciminatory treatment toward all the transporation modes. In theory, special preference is to be given to none; likewise, no special handicaps are to be imposed. But, it is not so.

Government policy toward America's transporation system is fickle, lacking in cohesion or direction and manifestly inconsistent in the manner in which it dispenses and withholds its largesse.

The National Transporation Policy, codified at 49 USC 10101, states in part that ". . . it is the policy of the United States government to provide for the impartial regulation of the modes of transporation." Unfortunately, this simple policy has been supplanted by an incoherent and disjointed system. By extension, this muddled policy disrupts the essential. . . to the American consumer . . . competition between the various modes. Competition is the moral shield of the free enterprise system: It produces lower prices, better service and ongoing innovation which in turn generates higher productivity. In the end, lack of a singular vision regarding transporation policy is a thief with his hands • in the pocketbook of the American consumer.

Consider the case of the airline industry. In that industry there is a user tax. But airline user taxes take the form of a direct tax on the real user of airline services—the customer.

The airline user tax manifests itself as a tax on individual tickets.

It is a tax which is inescapable—all direct, or real, users of the service provided must pay this tax. In the barge industry, it is the carrier who pays the tax. And, in the devastated barge industry, that tax cannot be shared with the shipper. There is no way to pass on the tax.

Consider also the case of the trucking industry. A few years ago, members of the Administration took a look around for some revenue enhancements—called "taxes" by most folks—and hit upon the idea of levying a huge user tax on the trucking industry. The tax took the form of the Surface Transporation Assistant Act which was passed by the Congress and was signed into law in 1982.

After all the applause had died down, somewhat more sober elements in the Administration and in the Congress began to look at the real condition of the trucking industry as opposed to its outdated reputation as a bloated, protected special interest, and a fair amount of the tax enacted a few years ago was rescinded. Why? Because responsible people in government looked at their handiwork and realized that they had made a grievous error. In this case, government acted responsibly, recognized its error and took laudable steps to correct it. The point of course, is that the government dispenses its largesse selectively.

It is worthwhile also to consider the case of the railroad industry.

Consider specifically, CONRAIL— which has emerged from the protective warmth of mother government's apron and—with a little push from mom—has decided to go out into the world and seek his fortune on his own.

The next time someone tells you how much it will cost to send Johnny to college, remember and be thankful that you were not called upon to raise baby CONRAIL to his maturity. Or perhaps more accurately, try to forget that you actually help raise the little railroad to manhood— despite the fact that mother government—ever protective of her brood—claims full credit for baby CONRAIL's remarkable performance— so remarkable is baby CONRAIL that he is up for sale—at the firesale price of 1.2 billion dollars.

Mother government originally considered only selected bids for baby. The winner (so far), the Norfolk and Southern Railroad, I should just mention as an aside, is considered by the same mother goverment..

Transporation Secretary Elizabeth Dole chose Norfolk Southern in the baby CONRAIL sweepstakes and recommended to Congress that the railroad be awarded custody of the perky lad.

Mother government is really pulling a fast one on the American public in the whole baby CONRAIL episode.

The total federal bailout of the previously strapped railroad cost 7.2 billion dollars—you paid. What's more, in 1984 and'last year, baby CONRAIL showed a profit of about onehalf billion dollars each year, which was not returned to you.

Why? For the public good. Such determinations are the proper role of government as a caretaker of the national interest.

But one goal of the Act—the concept of revenue adequancy for the freight rail industry—needs to be briefly considered here because it has ramifications which impact the waterways industry and other modes of transporation as well.

Put succinctly, revenue adequacy means making your basic costs as well as a reasonable profit margin on employed capital. In deregulating the railroads, the Congress recognized that the precipitous decline in rail profitability justified the concept of revenue adequency. Put another way, if a particular railroad is not revenue adequate, it can increase prices to shippers beyond the threshold which would otherwise be permissible until, under the complex formulas employed in the Staggers Act, the carrier has achieved an acceptable level of profitability.

The Staggers Rail Act has been abused by the Interstate Commerce Commission (ICC). According to the ICC, which has administrative oversight in the area, there are no revenue adequate railroads after nearly six years of degregulation. This is indeed curious because Wall Street touts railroad issues as exceptionally good investments. Though receiving the great benefits of "revenue inadequacy," various railroads buy other railroads and barge lines for well in excess of a billion dollars a pop.

By any objective, unbiased criteria, the water carrier industry is not now revenue adequate. We ask that the government, when it embarks upon policies such as grain embargoes and payment-in-kind programs, which drastically reduce the movement of grain and agrichemicals, recognize the severe financial impact of these programs on our industry. Revenue adequacy is a philosophical concept, and a good one in the abstract. But in practice for this concept to be a benefit and not a hinderance to the nation's transportation system it must be equitably and universally applied. It must not be a special prequisite for a single carrier mode.

Look at CSX and Norfolk Southern railroads. They are the bidders on a big barge line and baby CONRAIL, respectively. Both are deemed by the federal government as revenue inadequate. Financial data on these companies is readily available—they are publicly held.

What that data reveals makes for a hard case for those who suggest that these railroads are not revenue adequate.

The data reveal them to be highly profitable enterprises by any conventional business yardstick.

In taxable years 1981 to 1983, CSX Corporation not only paid no federal tax whatsoever, on profits of 1.75 billion dollars, but received re- bates of taxes paid in earlier years or sold "excess" tax benefits to the extent that the Corporation actually got money back from the federal government. Even more difficult to substantiate in light of the government's position on the revenue inadequacy of CSX Corporation, is that supposedly strapped Corporation's near magical ability to come up with 1.06 billion dollars to purchase Texas Gas Resources, parent company of one of the nation's largest independent barge companies with which CSX Corporation directly competes.

The Norfolk Southern Corporation, which is blessed by mother government as the purchaser of CONRAIL, is, of course, revenue inadequate. This despite profits in taxable years 1981 to 1983 of a respectable 574 million dollars.

The question one unfamiliar with the rarified practices of government might ask is: If I correctly understand the determination of revenue inadequacy to mean an inability to make basic costs, how come these supposedly revenue inadequate companies are at the same time so profitable and flush with cash that they are buying barge lines, bidding on CONRAIL and generally behaving like robust, healthy businesses?

A more pertinent question might be: If I correctly understand the ruinous financial condition of the inland barge industry, how come these companines are not, at least for a time, put behind the benevolent apron of mother government rather than made subject to still higher user taxes in their time of need?

Above all, where is the fairness in all this?

We in the waterways business insist these inbalances be brought to light and be righted. What we do not advocate is the establishment of another "Super Commission" to oversee and treat fairly all of the various transportation sectors. The institutions already exist to do that.

They just aren't doing their job.

The primary institution charged with the administrative implementation of Congressional mandates regarding transportation issues is the Department of Transportation (DOT). As an institution, the DOT has failings but the most glaring from our standpoint is its exaggerted tilt toward the rail industry— to the detriment of the other modes, in particular the barge mode which constitutes the primary competition to the railroads for hauling bulk commodities.

Ostensibly, the DOT is impartial.

Some might argue that the Department is impartial by calling attention to the Maritime Administration (MarAd) now under the DOT roof—as the institutional advocate for maritime interests. You see my point about imbalance.

Leaving the administrators of the law aside, what of the lawmakers themselves? On Capitol Hill, confusion reigns regarding maritime matters as it does in virtually all other aspects of the legislative process. In both Houses of Congress, committees and subcommittees are split along the different carrier fault lines and they act in virtual isolation from one another—rather than in concert as they should if we are to have a coherent national transportation policy.

Small wonder that laws are passed which result in such incoherency.

In the end, it is the American consumer who loses due to lessened competition.

One of the frustrations one encounters in reading the myth of Damocles is that there is no final, fundamental resolution to the tale.

The sword is left hanging—so is the reader.

Please make no mistake—all Americans, not merely those whose livings depend on the transportation network, sit under the capricious sword of the latter-day Damocles, whose name is the United States government.

Our condition, too, remains unresolved.

But there is no question that we—like Damocles—live in a perpetual state of dread. This is not a pleasant condition. Much more to the point; it is wrong in its disservice to the American people. 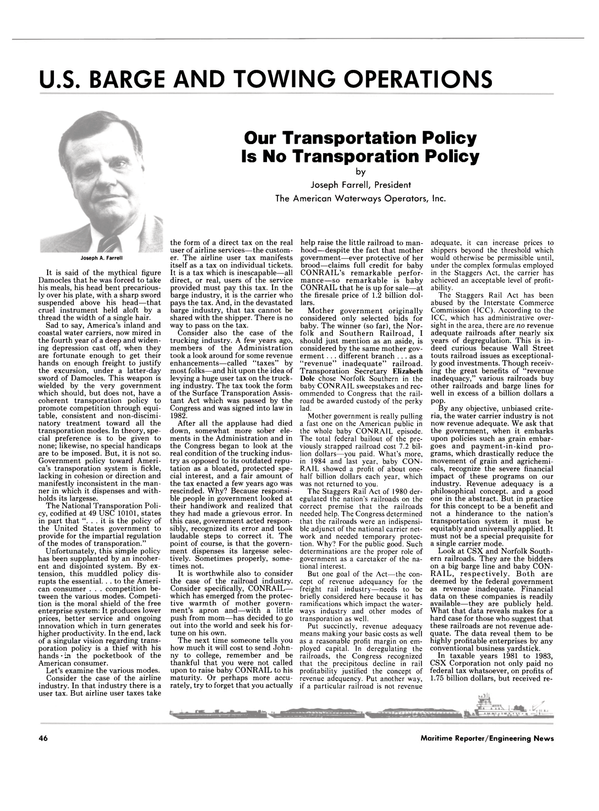 Read Our Transportation Policy Is No Transporation Policy in Pdf, Flash or Html5 edition of June 1986 Maritime Reporter