It is estimated there are approximately 10,000 self propelled tugs, towboats and offshore service vessels in the U.S. fleet.

NOTE: These tables do not include all shallow-draft vessels, i.e. ferries, patrol boats, fire boats, dredges, commercial fishing boats, etc. are not included.

The figures in these shallow draft tables are conservative as it is not possible to obtain data on every tug, towboat and offshore support vessel in the United States fleet (a limited number of smaller and/or individually owned boats may not be included).

Statistical Summary The following tables summarize the American-owned offshore service vessel fleet as it existed at the end of calendar year 1985. Tables have been provided showing the breakdown of the fleet by LOA by year built and by horsepower by year built for each of the major vessel types. The final table shows the breakdown of the entire fleet by vessel type and year built. Each of these tables represents the available fleet at year end. Each includes the known operational fleet plus vessels temporarily laid up, vessels in unknown fleets, and completed by unsold shipyard stock. Vessels removed from the fleet during 1985 are not included.

Statistical Summary The following statistical tables summarize the 1310 tugs in the active American fleet at the end of 1984.

Three specific vessel types have been identified and tabulated separately.

These 776 tugs are in general towing service.

The inventory has been tabulated by year built and horsepower ranges. It should be noted that these HP ranges are based upon manufacturer's ratings for continuous duty. 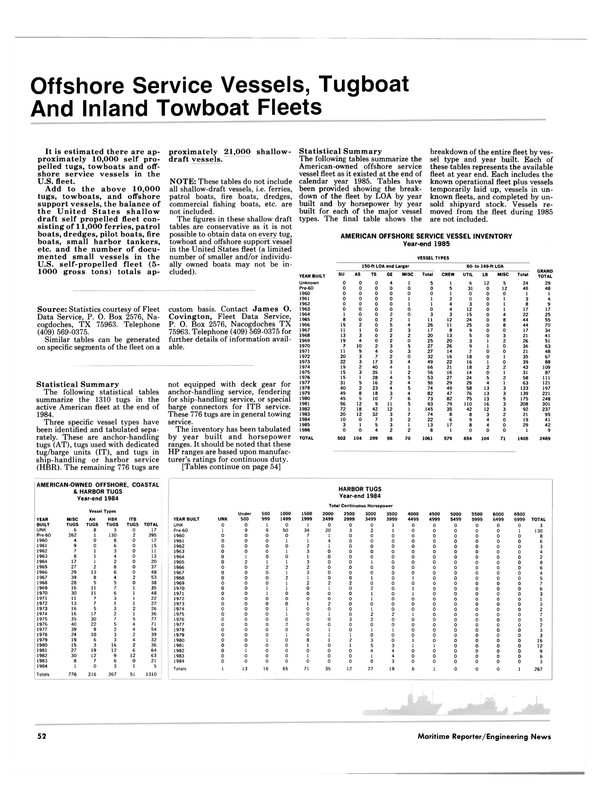