This article describing the status of shipbuilding programs is based on excerpts from a recent quarterly report on Navy procurement. Information is current as of mid-May.

Submarines Newport News informed the Navy it will likely bid on future Trident construction contracts. Until now GD-Electric Boat has been sole supplier of the Trident submarine.

The Navy plans to buy 20 Tridents, 13 of which have already been contracted to GD-Electric Boat. Contracting is at the rate of one submarine per year. Program funding totaling $7.9 billion is planned over the next five years.

Funding of $454 million has been requested for advance procurement in FY 1987 for the SSN-21.

Lead ship procurement is scheduled in FY 1989. Over the next five years the Navy proposes to spend $5.3 billion on the SSN-21 program and $10.3 billion is planned to complete the SSN-688 program.

High priority has been given to improving U.S. antisubmarine warfare systems. The SSN-21 is said to be essential in order to counter improvements in Soviet submarine capability.

The new submarine will be able to operate at higher speed, be quieter and dive deeper than the current SSN-688 class submarine. It will have advanced sensors able to search out enemy submarines. Navy says "new features of this submarine represent a quantum improvement over earlier designs." Aegis Surface Combatants Litton-Ingalls and Bath continue to build CG-47 class cruisers. A total force of 27 ships is planned. Four ships have been delivered, 15 are under contract. To complete the project, $7.5 billion has been programmed for 8 ships. Contracting is planned at the rate of two per year.

This is a slight stretch-out of the program as originally planned.

Bath is in the detailed design phase of its contract to build the lead DDG-51. Fabrication of the lead ship is to begin in late March 1987; keel laying is scheduled for late December 1987; launch is planned in September 1988.

The Navy plans to issue the RFP for three follow DDG's in July.

Todd, Litton-Ingalls and Bath will compete for the three ships in this solicitation package. A total DDG program of 29 ships is planned. Over the next five years the Navy has proposed a funding level of almost $14 billion for procurement of 17 DDG's.

Amphibious Ships A multibillion-dollar contract for follow ships in the LHD-1 program is the principal procurement now taking place in this area. Last August the RFP for three ships was issued. Bidders submitted unpriced technical proposals to the Navy on February 28. Price proposals will be requested following completion of the technical evaluation. Contract award is scheduled this summer.

The Navy has programmed $3.4 billion for this multiyear procurement over the next five years. Litton- Ingalls has the lead ship contract for LHD-1 and is obviously among the bidders for the follow ship contract.

The Navy has programmed $1.2 billion to procure a cargo version of the LSD-41. The new version (LSD- 49) will be similar to the LSD-41, but be designed to carry fewer air cushion landing craft. Lockheed and Avondale are now building LSD ships. No schedule has been set for this new procurement.

Six TACS crane ship conversions are planned over the next three years. About $180 million is budgeted for this program. Bay Shipbuilding, Continental Maritime and Dillingham have been awarded contracts for the first three crane ship conversions. Bids for TACS 4-6 were submitted to the Maritime Administration (who is executing the work for the Navy) in May. The eleven yards submitting bids—and their prices—are shown in Exhibit 2.

MarAd expects to award a contract for a three ship TACS package in July. The apparent low bidder is Bethlehem-Sparrows Point. In second place is Norshipco—with an apparent low bid about $8,000 under Dillingham. These prices include the cost of the cranes.

Support Ships Approximately 10 percent of planned SCN funding over the next five years is earmarked for support ship procurement. Here's the status and our assessment of future developments in each program.

• TAO-187—Nine ships are now on order: six at Avondale, three at Penn Ship. The first ship is to be sent on sea trials within the next few weeks. To date, aside from minor issues with the PTO generator and UNREP equipment placement, there have been few problems in this program. The Navy's objective is to build 19 of this class of ship.

The remaining program will be open to competition. Alternative engines will be considered in the next flight of TAO's.

• TAGOS (conventional)—The Navy has negotiated with Tacoma Boat to complete ships 9 and 10 in this trouble-plagued program. The remaining two ships in the 12 ship package to Tacoma will be recompeted.

Hardware bought by Tacoma for ships 11 and 12 will be specified as GFM in the bid package. Award of ships 11 and 12 to a new builder is planned for mid-1987. Ships 13-18 are under contract to Halter Marine.

• TAGOS (SWATH)—An RFP package was sent to prospective builders on May 5. The competition is open to all shipyards. Each of the ten yards participating in the design competition are supposed to earn extra evaluation points. Award will be in September. Starting FY 1988 all TAGOS ships will be SWATH design. The Navy plans to build a force of 26 TAGOS, nine of which will be SWATH design.

• AE—The Navy has placed on hold its plan to build the lead AE in FY 1988. Preliminary design has been completed; final design was to start in April. The program has been shifted outward due to budget constraints.

Final design is to be done by NAVSEA with shipyard input similar to the method used in the TAGOS-SWATH design.

• AOE—Contract design was completed and signed off in February.

RFP is due to be issued soon, with contract award planned for November.

The contract will likely be for four ships—one with an option for three more.

No design work on this ship has begun.

• AGOR/AGX—The Navy has accorded priority to improving its oceanographic and coastal survey capability. These ships will get high priority. It is understood that an increased number of AGOR/AGX ships is now being considered in the FY 1988 programming process. The lead ship (AGOR-23) is planned for FY 1987. It will replace a university operated oceanographic ship. A COR with cost constraint will be used in the procurement. The procedure will be similar to the procurement method used for the MSH.

• AO (lengthening)—NAVSEA expects to complete the contract design by December. Award of the lengthening contract is planned in May 1987. No decision has yet been made as to whether individual contracts will be awarded, or all five ships will be made part of one bid package.

Minesweepers Five mine countermeasures (MCM) ships are under contract: three at Peterson builders, two at Marinette Marine. Nine ships remain to be contracted over the next two years. The initial ship in the program is scheduled for delivery in October 1986.

Bell Aerospace Textron is under contract to build the lead minesweeper hunter (MSH). The contract includes options for eight additional ships. A total force of 17 MSH's is planned. The remaining eight ships will be competitively awarded in FY 1988 and 1989. Delivery of the lead MSH has been delayed seven months, with delivery now scheduled for February 1988.

The MSH is the result of an industry design competition. Bell's successful proposal is a surface effect design based on Swedish technology.

It is a glass reinforced plastic hull. According to NAVSEA, "these unique features and the mine warfare ship requirements of low magnetic permeability, shock hardness and noise attenuation have complicated the design process for Bell and resulted in higher shipbuilder's engineering cost and a delay in construction and delivery of the lead ship." Small Naval Craft and Drydocks NAVSEA has outstanding contracts to acquire about 1,000 small craft and two drydocks. These contracts total to about $265 million.

During FY 1986 and 1987, the Navy plans to solicit bids for over 300 boats and small naval craft. The planned procurements are listed in Exhibit 4. Not included in the listing are craft—and one drydock— funded in FY 1986 that have already been contracted or for which bids have been received. A cautionary note is that budget constraints will likely cause change in the FY 1987 program.

All but the SWCM, sail training craft and rigid inflatable boats will be contracts set aside for small businesses.

Payment and performance bonds will be required on all contracts.

Ship Operating Contracts An RFP was reissued in April for operation of five cable ships. Bids are due on July 25. This is an A-76 comparative solicitation—where commercial bids will be compared to operating costs under civil service manning. Award will be made to the low bidder if the commercial bid will result in savings.

The RFP for contract operation of two hospital ships and the sub- mergence support ship Point Loma was withdrawn in May. A decision was made to include these ships in the MSC A-76 study. The RFP will be reissued at a date not yet determined.

RFP's to operate four range instrument ships and seven ocean tugs will also be issued as part of the A- 76 study. The dates for release of the RFP's has not been set.

In mid-1987 the operating contract for the first four SL-7's will expire. SeaLand has this contract.

Competitive bids will be solicited for the next operating period.

Merchant Ship Revolving Fund Hearings were held in February to consider authorization of a program to build cargo ships configured for military sealift mission. Last December $852 million was earmarked for this use in the FY 1986 defense funding continuing resolution. Authorization of the program is required before the funds can be used.

Further appropriations committee hearings in House and Senate are also planned should the authorizing legislation be passed.

In March Mr. Pyatt appeared before a House Armed Services subcommittee and stated Navy's opposition to the proposed legislation.

House subcommittee mark-up of the proposed legislation was completed on May 8. The closed session results were not known at time of publication.

The outcome is entirely dependent on whether sufficient political force can be mustered to push this legislation through Congress despite the Administration's opposition. 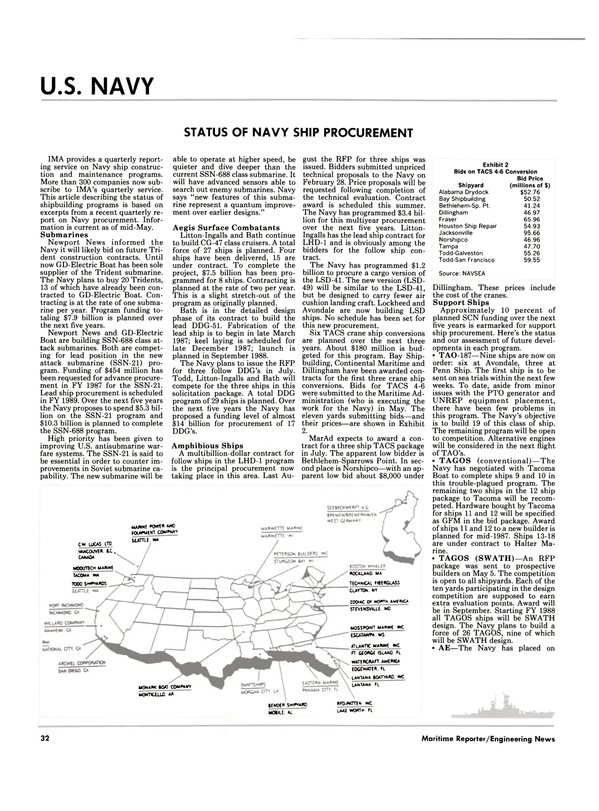