Caterpillar Engine Division's newest family of diesel engines, the 3600 Series, is now in production at the company's new plant in Lafayette, Ind. North American field operations for the 3600 began in August 1984. A 3606 marine engine powering a bulk carrier now has more than 8,500 hours service at 2,250 bhp; a 3608 prime power generator set has accumulated 5,700 hours at 2,000 kw, 60Hz; and a 3612 marine engine in a Great Lakes freighter has run 2,750 hours at 4,500 bhp. In addition, single-cylinder test engines have operated 35,000 hours, including engine development work on spark-ignited and residual-fuel configurations.

1 fuel at contaminant levels of up to 3V2 percent sulfur and 300 ppm vanadium. Development work is continuing on heavier fuels. Production of the 3600 Series began with four generator sets shipped during the latter part of 1985. A 3612 locomotive engine was installed by the end of December, followed by a 3616 prime power generator set, a 3606 engine for dredge power, and three 3608 marine engines.

Caterpillar expects the 3600 Series engines to be among the most fuel-efficient and durable in their power and speed class, 720 to 1,000 rpm. Initial rated fuel consumption of 0.327 pounds per horsepowerhour was achieved through system and component efficiency, including turbocharger match, unit injectors, precision injection timing, and high combustion pressure capability.

The family is designed to operate on a range of blended fuels.

Serviceability of the 3600 family has been insured with enginemounted oil and fuel filters, segmented crank camshafts, and development of exchange cylinder repair kits and hydraulic servicing tools.

The 3600 Series is said to be the only totally new medium-speed diesel in the 3,000-6,000 bhp class engineered and manufactured in North America in more than two decades.

Caterpillar becomes one of a limited number of diesel engine manufacturers offering worldwide distribution and parts and service support for diesels in the 70-6,000 bhp range.

For additional information and free literature on the Caterpillar 3600 Series engines, Circle 43 on Reader Service Card 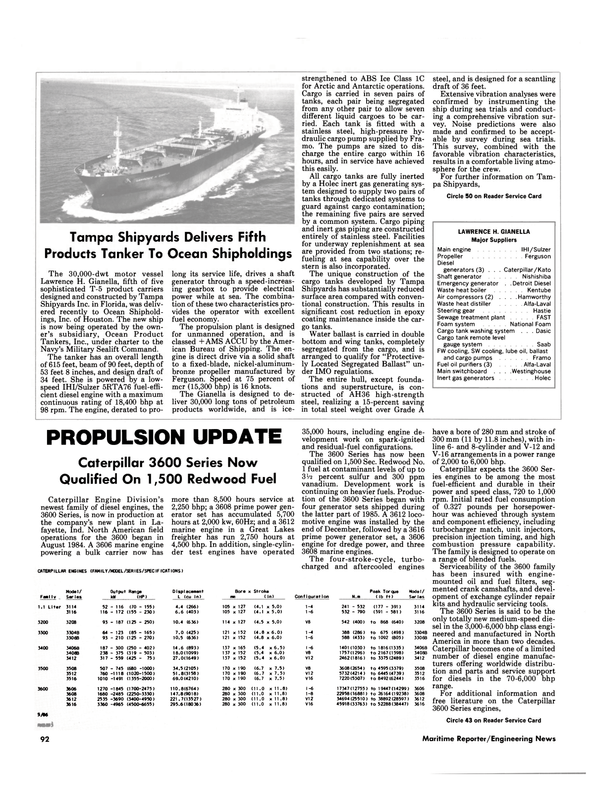