Ordered from Schichau Unterweser AG in West Germany, the two new vessels will each have three 14- cylinder engines having a combined output of 31,500 bhp at 510 rpm.

Each engine will drive a controllable- pitch propeller ordered from Sulzer-Escher Wyss GmbH of Ravenburg, West Germany. The center propeller will be capable of being fully feathered; service speed will be 22 knots.

The Sulzer ZA40 medium-speed design and its latest longer-stroke ZA40S version have become popular for new ferries. Including the two new Townsend vessels, there have been 26 units of these engines ordered for six large ferries, the others being for Anders Jahre, North Sea Ferries, and SNCF.

The two 20,000-gt Townsend ferries will be the largest ever built for cross-Channel service. With accommodations for 2,400 passengers and 700 cars, they will operate on the Dover-Calais route. Townsend's three Spirit of Free Enterprise Class ferries on this route since 1980 are reported to have had highly satisfactory service from their triple Sulzer 12Z40 main engines.

The two new ferries will in fact have complete Sulzer engine installations.

Auxiliary power will be provided in each ferry by four 8-cylinder Sulzer AT25 diesels, each of 2,160 bhp at 1,000 rpm. These will burn the same grade of heavy fuel oil as bunkered for the main engines. 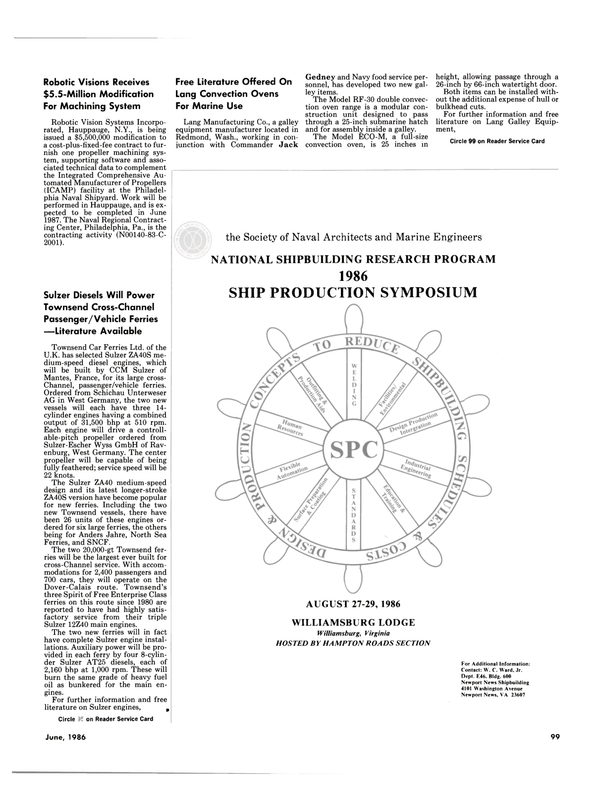