—Literature Available During the past few months, American Hoist & Derrick (Amhoist) Company cranes have made the world's heaviest lifts on both land and sea. Not only did the Amhoist cranes capture both world titles, but it was done in conjunction with one customer on separate projects.

Amhoist established the world's heaviest recorded marine lift for a single crane pick during sea trials of McDermott's new DB 102, a semisubmersible crane vessel. Each of the two Amhoist revolver cranes aboard the vessel has a rated lifting capacity of 6,000 metric tons; they can lift more than 12,000 tons in tandem. During the sea trials in the Sea of Japan, each of the cranes lifted a test barge weighted to 7,260 short tons (110 percent of rated capacity), said to be the largest load ever lifted offshore by a single crane.

To set the land lift record, American cranes were used in the construction of an oil platform jacket being manufactured for Sohio Petroleum Company by McDermott's Marine Construction Fabrication Division in Morgan City, La. The lift involved a total of 35 crawler cranes (31 of them American) to roll-up and then lift and swing one side of the 890-foot, 3,785-ton jacket.

Once the roll-up was complete and the framing row was at a near vertical position, the cranes carried it some 80 feet to a skidway. In order to accomplish the lift in perfect harmony, each of the 35 cranes was equipped with a radio and load-indicating instruments. 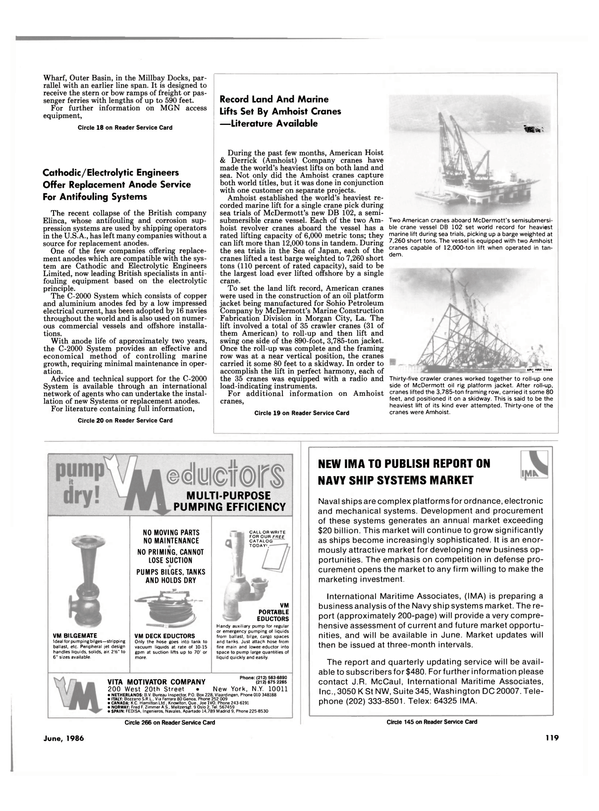