At the conclusion of his morning presentation that outlined the Defense Logistic Agency's (DLA) organization and operation, Maj. Gen.

Joseph Morgan, USAF, DLA executive director for quality, received a barrage of questions, complaints, and comments from maritime industry members at the latest Marine Machinery Association (MMA) Government/Industry Forum. Upon his return to DLA headquarters in Alexandria, Va., General Morgan immediately conferred with his top civilians. A phone call to MMA executive director Daniel Marangiello resulted in a rescheduling of events so that General Morgan and four of his deputies—Ernest E l l i s , Ivan Snyder, Aldo D o m e n i c h i n i , and Brian Schutsky—could return to the meeting to answer, clarify, and amplify the items left hanging after the morning session.

The resulting exchanges between the DLA executives and MMA members clearly demonstrated the dedication and concern for quality by General Morgan, his staff, and the marine industry. The general and his top executives returned to the meeting not to defend the DLA and its actions but to get the facts and resolve the issues presented.

The DLA acts as the procurement and inspection agent for the individual services, and as such purchases and inspects to standards and specifications called for by these services—no more and no less.

General Morgan requested specifics of any case to the contrary, and promised immediate remedial action if violations exist. He invited the MMA to participate on the Quality Executive Committee composed of top-level executives from DLA, NAVSUP, NAVSEA, and NAVAIR.

Alfred Skolnick, president of the American Society of Naval Engineers (ASNE). Dr. Skolnick noted that while ASNE is 98 years old and MMA just over two years old, both organizations are dedicated to improving the technical excellence of the U.S. Navy. He wished MMA success in achieving its goals, which are: • To provide the fleet with quality systems, machinery, equipment, parts, and services that will insure safe and reliable operation at fair and reasonable prices; • To foster honest and fair competition; and • To demand ethical business practice from both industry and government.

He also acknowledged that without OEMs and their responsiveness to fleet problems, and their innovative ideas to solve the challenging demands for newer and more capable equipment, the Navy would be severely handicapped. He was quick to point out, however, that the Navy must comply with the provisions of the Competition in Contracting Act. NAVSEA, he said, is attempting to develop a contractual arrangement whereby the Navy will protect the proprietary interests of the OEMs, specifically on critical components, while in turn the OEMs will assist NAVSEA In obtaining competition for the noncritical components.

Admiral Home is continuing to work with the Competition Advocate of the Navy and the legal staff to obtain a fair and equipable solution to this complicated issue. Responding to a suggestion by Capt.

James Knorr, deputy head of NAVSEA's machinery group, that OEMs participate in Fleet H, M, & E conferences, Admiral Home indicated that the idea had merit and he would look into it.

Following a reception and luncheon, Timothy V. O'Sullivan, president of Fairbanks Morse Engine Division of Colt Industries, introduced Congressman Les Aspin (D-WI), the keynote speaker. The chairman of the House Committee on Armed Services, Mr. Aspin outlined the difficulty in balancing the budget and the difficult decisions facing the Department of Defense, the Congress, and the President.

In the past, Congress merely cut here and squeezed there, forcing the DoD to make programatic adjustments.

No longer will this suffice, he explained, as serious cuts that can impact national defense policy will be required to reach the bottom line. Secretary of Defense Caspar Weinberger, he said, might be asked to furnish the Armed Services Committee with a priority list, which panel members will use to arrive at the final budget authority figure. Cuts of as much as $38 billion may be required, resulting in a $282-billion defense budget.

When asked his opinion on how the Supreme Court would rule on the Gramm-Rudman-Hollings law, Mr. Aspin felt that the Court would uphold the lower court decision striking down only the automatic feature of the law, and leaving Congress to decide on the specific cuts to be made to remain within the deficit reduction total. During this question and answer session, the Congressman acknowledged the concerns of the OEMs, and extended an invitation for the MMA to testify before his committee.

In the afternoon session, restricted to MMA members, ex-Congressman Robert McClory provided an in-depth insight on how to conduct effective communications with elected officials. Calling on his 20 years of experience as one of the most highly respected members of the House, Mr. McClory gave the members some excellent pointers and advice.

The remainder of the afternoon session was devoted to organizing working committees to pursue the groundwork established at this and previous MMA meetings. At the conclusion of the meeting, attendees expressed satisfaction with the results.

It is apparent that MMA is making headway and being looked upon by the DoD and the Navy as a valuable ally in working out solutions to the problems that are plaguing both the Navy and the industry. 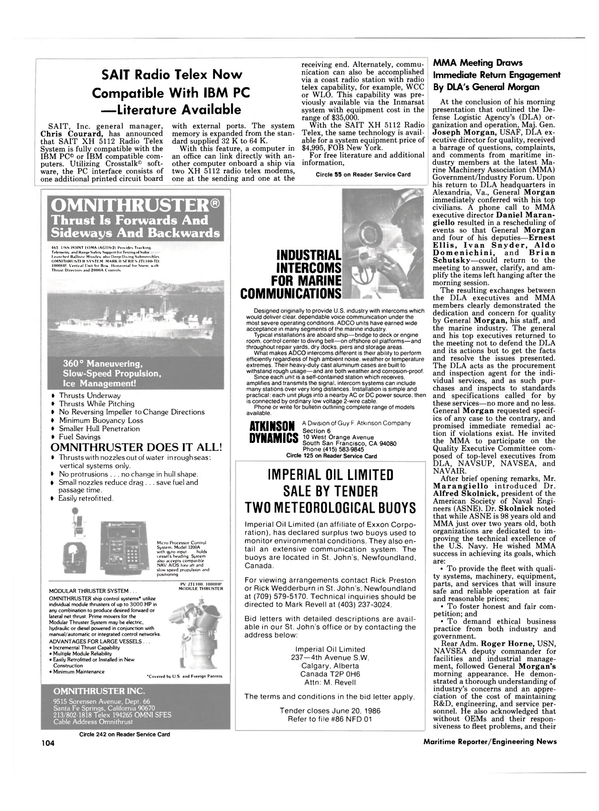