AWSC And The Industry: Working For The Future

It is an unmistakable fact—the second tier shipyards of the nation are still experiencing a severe economic depression. New construction starts on inland and coastal equipment are virtually non-existent.

Overall employment levels continue to decline, and repair work remains the mainstay of the industry. However, despite these extremely difficult times, there are a handful of shipyards which continue to believe in the future of a second tier shipyard industry, and continue to work to preserve and improve the climate in which it operates. These yards are known collectively as the American Waterways Shipyard Conference (AWSC).

AWSC, as many are aware, is the national trade association for the second tier shipyards, and is a conference of the American Waterways Operators, Inc. Through AWSC, we have an opportunity to influence regulations and legislation in order to ensure the continued viability of the industry. By joining together and presenting a unified front, we can effectively fight the industry's battles. One shipyard working alone cannot hope nor expect to have the same impact.

Undoubtedly, many problems confront our industry, but there are two issues which, if left untouched, have the potential to cause great harm to the second tier shipyards.

First on the list is the Occupational Safety and Health Administration's (OSHA) current proposal on occupational exposure to benzene which will have a tremendous impact on all barge cleaning operations. Second is the continued effort by certain legislators to allow foreign-built passenger vessels to enter the Jones Act trades. (Only the cabotage provisions of the Jones Act will be considered in this article.) Barge cleaning operations constitute a small part of our industry.

However, they perform a necessary and vital function for the tank barge operators who transport liquid cargoes along our waterway system. It is necessary to clean a tank barge whenever repair work, a change of cargo, or an inspection is necessary.

In OSHA's proposal, the agency would reduce the current permissible exposure limit from ten parts per million (ppm), to one ppm. If a cleaning plant exceeds the proposed one ppm exposure level, then it must comply with a myriad of requirements such as extensive medical examinations for all exposed employees— at no cost to the employee, extensive recordkeeping requirements, and engineering controls to reduce the exposure level to one ppm. It is AWSC's contention that it is virtually impossible for any cleaning plant to clean and maintain a tank barge that has carried a benzene-contaminated cargo to or below one ppm. Consequently, all of the other requirements contained in the proposal would have to be met, putting a further economic burden on the facility. This proposal has the capacity to eliminate this sector of the industry.

In their rulemaking process, OSHA identified seven primary industry sectors which they felt to be directly impacted; the barge cleaning industry was not one of them.

OSHA did not review the impacts their rule would have on us, and in fact, we were not even considered.

AWSC took vigorous exception to this. We felt that since we were directly impacted by any benzene proposal, OSHA had the obligation to conduct a study examining the impacts and alternatives of their rulemaking on the cleaning industry, similar to the studies conducted for the other seven industry sectors.

Because of AWSC's persuasive arguments, OSHA plans to conduct such a study. It took AWSC, through collective action, to push OSHA into recognizing the existence of this industry sector and to realize the harm the new proposal could cause. By working with OSHA, AWSC will help to develop a realistic proposal which will adequately protect the worker.

Continued protection of the Jones Act remains the primary mission of AWSC. The Jones Act is the very cornerstone of the United States' current maritime policy. However, efforts are constantly mounted which would weaken this important maritime legislation. Movement to allow foreign-built passenger vessels into our domestic trades remains strong. Last December, Senator Ted Stevens (R-AK) introduced S. 1935, which would allow up to five foreign-built vessels into the domestic trades providing they meet certain requirements. These vessels must have cabin space for 400 passengers, be built no more than twelve years prior to enactment of this legislation, and must have all repair work necessary for U.S. Coast Guard compliance completed in U.S. shipyards. AWSC sees this as another attempt to undermine the integrity of the Jones Act. In past years, AWSC has oppposed and helped to defeat similar legislative attempts. We continue to vigorously oppose this legislation which has the potential to cause serious harm to the domestic shipbuilding industry.

The construction of passenger vessels in the second tier shipyards is the one bright spot in today's economic climate. According to a recent news report, twenty-six passenger and large recreational vessels were built by twenty-four different shipyards, and it is a growing market.

Just three years ago, only nine vessels were built by four shipyards.

Although the vessels considered in S. 1935 are larger than those built by our industry, these larger vessels can still be considered competition for the smaller vessels.

AWSC is not opposed to the development of a U.S. cruise industry.

Critics have stated and continue to state, that a viable domestic cruise ship industry does not exist in the United States. We disagree. The vessels we build operate in the domestic trades and provide U.S.

citizens the opportunity to enjoy scenic tours around the country.

These vessels are crewed, operated and built by U.S. citizens, and provide jobs in the shipyards where they are built. Allowing these foreign- built vessels into the domestic trades would disrupt this developing market and further increase the unemployment level in our industry.

AWSC is the only shipbuilding trade association vigorously opposing this legislation.

These are only two of the many challenges facing our industry today.

No one shipyard can hope to have the collective impact of AWSC. Only by taking a combined, proactive stance can we hope to confront these problems and preserve our industry's future. As AWSC chairman, I look forward to meeting these and all other challenges head on. The members of the American Waterways Shipyard Conference believe strongly in the future of the second tier shipbuilding industry, and it is only by working together that we can be assured that a future exists. 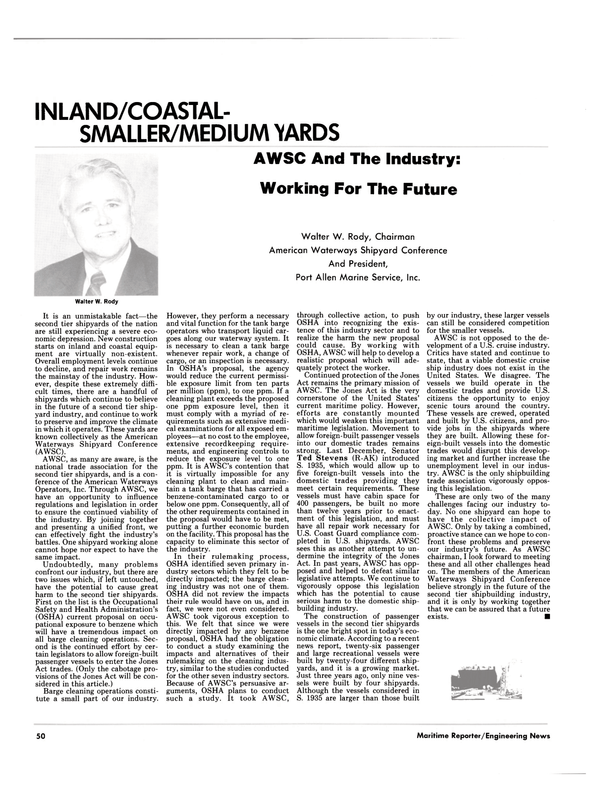 Read AWSC And The Industry: Working For The Future in Pdf, Flash or Html5 edition of June 1986 Maritime Reporter