As part of an effort by the Massachusetts Water Resources Authority (MWRA) to rejuvenate Boston Harbor, the Quincy shipyard, renamed the Fore River Staging Area, will be the site of a $6.1-billion redevelopment project.

In 1987 the MWRA purchased the 180-acre Fore River shipyard from General Dynamics, who operated the facility after acquiring it from Bethlehem Steel in 1964.

An $87-million sludge treatment plant that opened at Fore River in 1991 will end decades of dumping shipyard sewage into the harbor, making "an enormous difference in the quality of Boston Harbor," said Douglas B. MacDonald, executive director of the MWRA. Almost 70 tons of sludge a day is processed into fertilizer and then shipped by railroad for distribution.

Contractors are using 60 acres of Fore River as a heavy equipment and materials staging area. Trucks carrying the equipment use one of two roll-on/roll-off piers to board barges for Deer Island, the principle construction site for the harbor project.

In addition to being a support base for the Boston Harbor cleanup, the Massachusetts Shipbuilders Corporation (MSC) have teamed with AK Engineering to revive ship repair and building at the old Quincy shipyard. Of the 70 acres set aside for shipbuilding, 15 acres are currently in use, said Maggie Debbie, MWRA development manager. The shipbuilders have repaired or decommissioned four vessels that were used in the Gulf War. 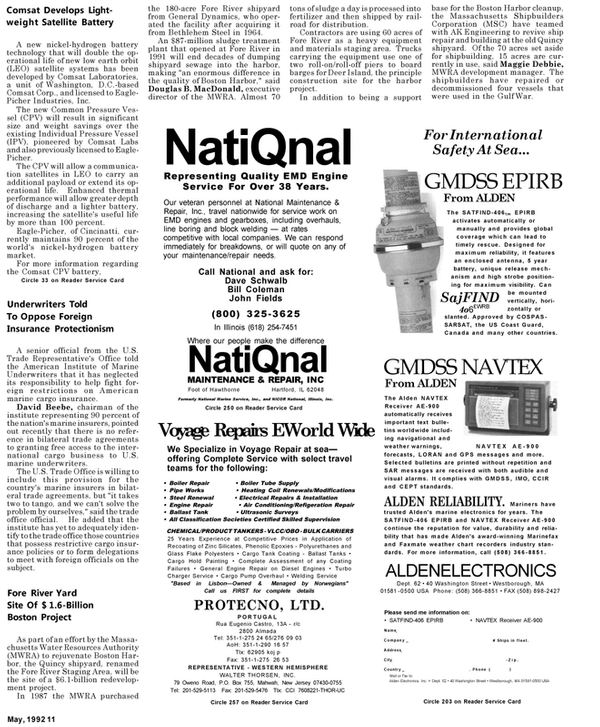