Newport News Shipbuilding & Drydock Corp., Newport News, Va., recently unveiled a new frigate design which it plans to offer to the worldwide military market. Costing about $400 million, the new FF-21 frigate would be in direct competition with reportedly more expensive designs from Germany and France.

The FF-21 concept is a state-ofthe- art high-speed frigate incorporating proven and supportable systems for protection from subsurface, surface and airborne threats. Additionally, this highly automated vessel will be capable of operating independently or as an integral component in multiservice defensive operations.

The FF-21 multimission frigate design is a product of the combined talents and resources of Newport News Shipbuilding, Hughes and John J. McMullen Associates— leaders in ship design, construction and combat systems development and integration. As a result, the FF-21 incorporates the latest technologies in hull, mechanical, and electrical systems, as well as in weapons delivery components, combat system sensors, data management, and communications systems.

Newport News claims that the FF-21 would be "faster, stealthier and less expensive" than Germany's MEKO frigate or France's Lafayette Class version. The two foreign designs are estimated to cost about $450 million apiece.

There are about 10 to 12 countries around the world currently buying such ships. The most likely markets for the new frigate would be in the Middle East, Far East and Latin America.

Propulsion will be provided by a CODOG (Combined Diesel or Gas Turbine) system consisting of twin LM2500 gas turbines producing 60,000 hp and two 12-cylinder MTU diesels producing 8,840 hp. The maximum speed of the FF-21 will be over 33 knots using the gas turbines. The two diesels will provide a maximum speed of 22 knots for cruise propulsion. 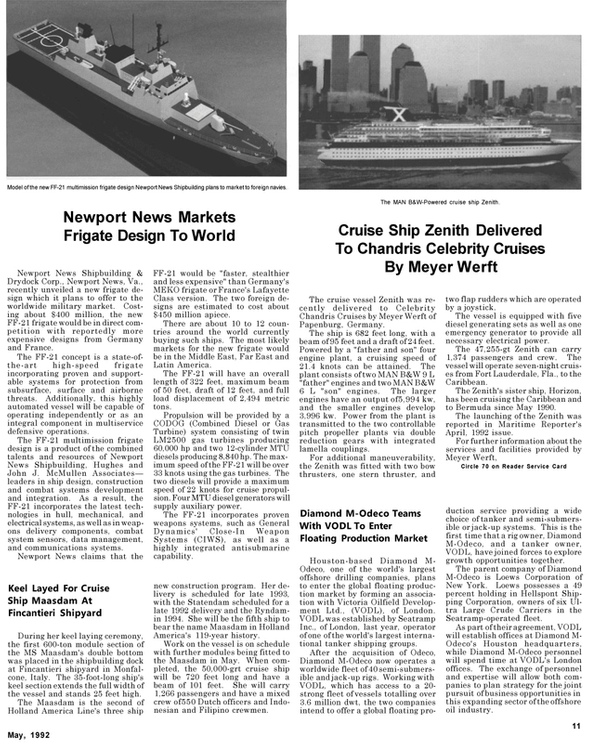