Naval officials have told Congress that the U.S. Navy expects to award its first contracts to private shipyards from its proposed $3 billion National Defense Sealift Fund early in 1993.

They added that the timing will depend on how quickly Congress and the B u s h Administration can resolve differences over the scope and structure of the sealift fund.

Rear Adm. R.D. Milligan, director of the budget and reports office of the comptroller of the Navy, said.

"We want a build-and-charter program that would allow the expansion of sealift without additional costs to the taxpayer." Under the program, the Navy will acquire through construction and conversion, 20 large roll-on/roll-off vessels; lease two containerships for prepositioning; and expand the reserve fleet from the current 96 ships to 142.

Admiral Milligan said that in addition to providing work to U.S.

shipyards, the new ships will open a lot of seagoing jobs for maritime workers.

Ronald K. Kiss, a deputy assistant secretary in the Navy's office for research, development and acquisition, said the Defense Acquisition Board, an internal Pentagon group, is likely to approve the $3 billion by May 1992.

All U.S. sealift financial resources, under the program, will be concentrated under a single management structure. Mr. Milligan said it will involve some sort of cooperative arrangement between the Navy and the Maritime Administration. 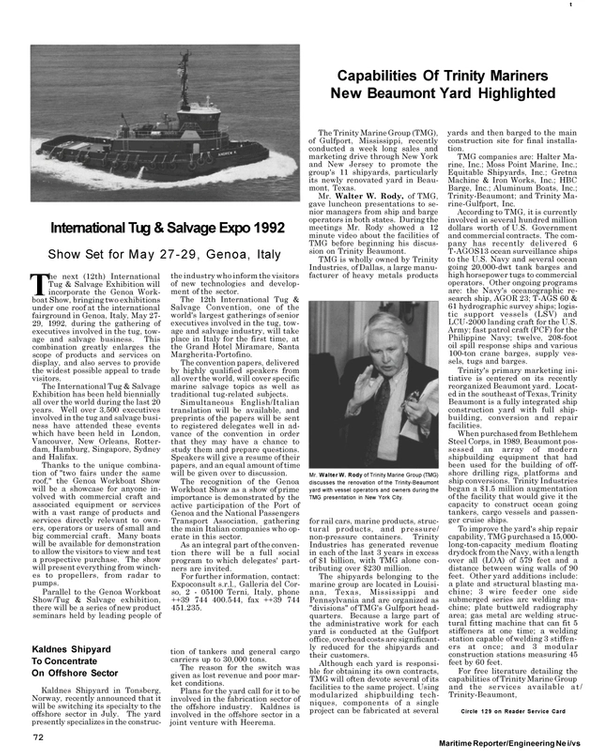 Read Navy Expects To Award First Contracts From Sealift Fund In Early '93 in Pdf, Flash or Html5 edition of May 1992 Maritime Reporter