By Comdr. Peter A. Popko, USCG and Stephen M. Shapiro*

Coast Guard Rear Adm. A.E. (Gene) Henn, Chief of the Office of Marine Safety, Security, and Environmental Protection, serving as the head of the U.S. delegation to MEPC 32, stated that the U.S. fully supported the principles embodied in regulations 13F (new tankers) and 13G (existing tankers) because they were the same principles contained in the Oil Pollution Act of 1990 (OPA 90).

However, since there were technical differences between regulations 13F and 13G, and the requirements of OPA 90, the U.S reserved its position on adoption of these amendments to the International Convention for the Prevention of Pollution from Ships (MARPOL 73/78).

Under the provisions of Article 16 of MARPOL 73/78, these amendments will enter into force on July 6, 1993, unless more than one-third of the parties to MARPOL 73/78 object to the amendments by January 6, 1993. The Coast Guard is currently reviewing and evaluating possible courses of action with regard to these amendments.

Scheduled to be published in late spring, the U.S. double-hull regulations will provide standards consistent with those agreed to at MEPC 32, but will apply them as required by OPA 90. They will appear as an interim final rule (IFR) rather than a final rule to allow for further public comment. The IFR will not foreclose options with respect to final U.S. action on the amendments adopted at IMO. Additionally, it will not contain any provisions for alternatives or equivalents to double hulls, since they are not presently permitted under OPA 90.

OPA 90 requires a double hull to be fitted on each vessel, including foreign ships, carrying oil in bulk as cargo or cargo residue in U.S. waters.

Any such vessel (with some specific exceptions) that is constructed or that undergoes a major conversion under a contract placed on or after June 30, 1990, must have a double hull fitted at the time of construction or major conversion. Starting in 1995, an existing vessel must be fitted with a double hull in accordance with a timetable in OPA 90.

Mid-Deck Studied The mid-deck design included in regulation 13F as an alternative to double hulls is one of the technical differences which has caused the Coast Guard to reserve its position.

Since MEPC 31 in July 1991, the U.S. has clearly voiced an objection to the mid-deck design, stating that an alternative needs to be proven before it is accepted by the MEPC [there are no mid-deck designed tankers under construction or in operation at present]. As a result, IMO agreed to undertake a study to compare the environmental performance of double hull and mid-deck tankers, and to evaluate guidelines that would be used for approval of other possible alternative designs.

The Coast Guard was an active participant on the IMO Steering Committee for this study with the main objective of insuring that the study be fair and equitable. In their report, the Steering Committee concluded that when considering total oil outflow, the mid-deck design is equivalent to the double hull.

The U.S. reserved its position on this conclusion in the Steering Committee and later at MEPC 32.

OPA requires the Coast Guard to determine whether other structural and operational tank vessel requirements would provide protection to the marine environment, equal to or greater than provided by double hulls. It further requires the Coast Guard to report to Congress its determination and recommendations for legislative action. To fulfill these obligations, the Coast Guard commissioned the National Academy of Sciences (NAS) study, Tanker Spills: Prevention by Design, completed this past February, which evaluated 17 different oil tanker design concepts.

The Coast Guard has also initiated an R&D project that will use probabilistic oil outflow computer modeling to evaluate three designs in addition to the double-hull and mid-deck designs which were considered in the IMO comparative study. These three additional designs are the Coulombi Egg, the POLMIS tanker, and the American Underpressure method [see article on this method below]. Unlike the IMO comparative study, this project will evaluate not only total oil outflow, but also the probability of zero oil outflow.

The Coast Guard intends to use the NAS study, the IMO Comparative Study on Oil Tanker Design, and the results of their R&D project to assist in determining if there are equivalents to double hulls for the report to Congress which is scheduled for completion this summer.

Editor's Note: Special thanks to Commander Popko and Mr. Shapiro for providing this up-tothe- minute report. Both work for the Coast Guard's Standards Development Branch (G-MVI-2), Merchant Vessel Inspection & Documentation Division at U.S. Coast Guard Headquarters in Washington, D.C., which is in the midst of developing the U.S. 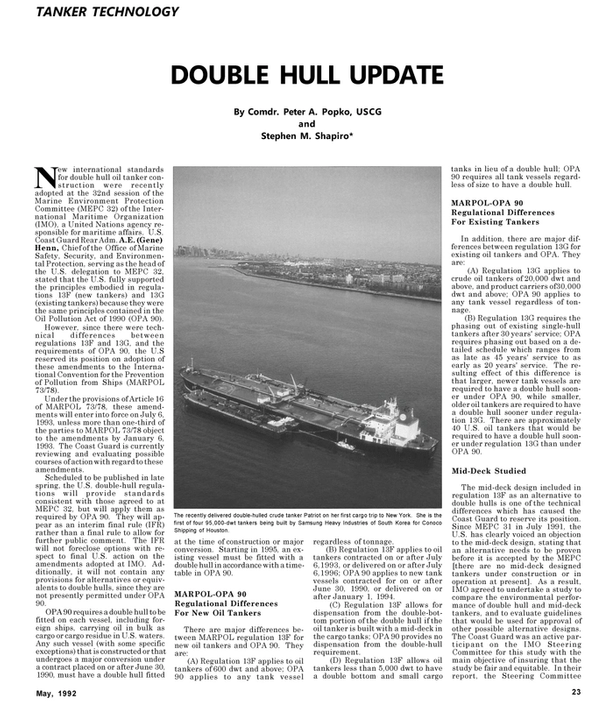