The idea is based on the assumption that the diesel process can be used to burn any hydrocarbon if the conditions are right. The conventional diesel process anticipates that the combustible is introduced at the end of the compression stroke, which means in a gas diesel that the gas must be introduced at high pressure.

The advantage of the diesel process for the gas-burning engine is that the same thermal efficiency can be achieved as with an oil-burning diesel engine, resulting in an equal power weight ratio for both types of engines.

Another benefit is that different kinds of fuel can be used. In the case of the Wartsila Vasa 32 GD, heavy fuel, distillate oil or natural gas are useable.

While developing the Vasa 32 GD, Wartsila first had to confirm that achieving an acceptable combustion process with the most common gas, i.e. natural gas, would be possible.

By using experimental injection equipment, the company was able to demonstrate the feasibility of burning gas in both a combustion cell and in a real diesel engine cylinder.

Wartsila next had to design and develop the industrial equipment that would be able to perform in a diesel engine for thousands of hours of operation. The company tested three different types of engines, after having encountered some difficulty in achieving high thermal efficiency over a wide load range, long equipment lifetime, reliable operation and smooth switch-over from fuel to fuel. By using some of their pilot installations, the company was able to perfect the engine's gas injection equipment.

At the point in engine development that a plant with 3 by 18 cylinders approached 98 percent thermal efficiency on a regular basis, Wartsila decided that the Vasa 32 GD was ready for full production.

The key component in the engine is the injection valve, which provides concentric injection of gas and pilot fuel. Gas injection is controlled by a control oil pump driven by the engine camshaft. While it can also be used as the normal lubricating pump, a low pressure oil pump acts as the feed pump to the control oil pump, while the high pressure pump supplies sealing oil to the gas injector.

Wartsila uses an electronic speed regulation system to separate actuators for gas and diesel oil. To ensure that no malfunctions of the gas injection valve lead to engine cylinder over pressure, a quick-closing valve has been fitted. To provide maximum accuracy of the injected amount of pilot fuel at low injection volumes, a special injection pump is provided.

The Wartsila pilot installation with the most running hours had 8000 hours per engine at the time of product release. Experience indicates that the lifetime of the gas nozzle seems to be at least equal to the normal lifetime of a diesel nozzle, an acceptable operational reliability.

Wartsila claims that it may be possible to lower the Vasa 32 GD's emission levels even more. In light of increasingly stringent international air pollution requirements, this is likely to count significantly in gas-diesel technology's favor.

A solid understanding of how the engine's cylinder and control system react at different loads demanded an extensive series of bomb tests, large text matrixes for nozzle hole configuration, measure- ment and calculation of heat release, mathematical simulation of the combustion as well as simulation of control functions.

The experience gained by Wartsila Diesel from the Vasa 32 GD is considerable and the company is fully prepared to continue the development of gas technology applications. 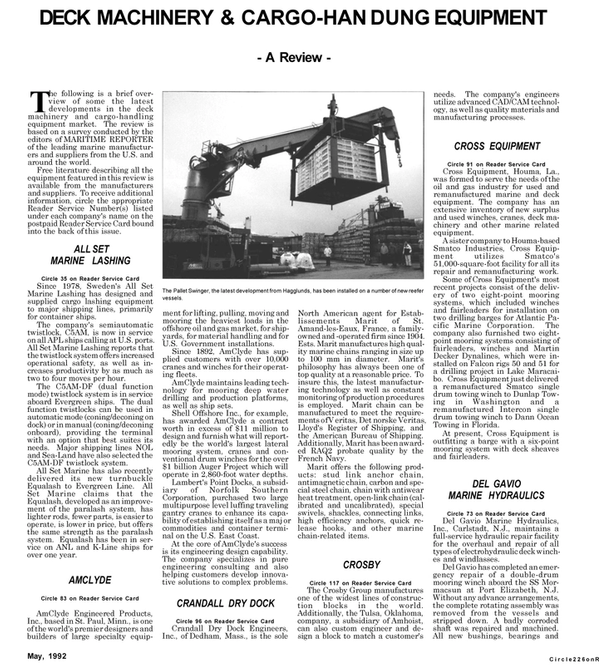