The U.S. Army Corps of Engineers is facing a major effort from the inland waterway industry to have more funding from its operating budget diverted to low-cost lock renovations that would significantly reduce barge traffic delays.

Within two years of being approved, Corps money would begin flowing into new construction projects that would relieve serious backups along the Upper Mississippi and Illinois rivers.

The definition of what constitutes major rehabilitation will decide the fate of the waterway industry's plan, said federal and commercial officials.

Under present requirements, the waterways trust fund, financed through fuel taxes on towboats, must supply half the money for major rehabilitation work. However, new rules proposed last year by the President's budget office direct the Corps to put even smaller projects within the bounds of fund financing.

Donald Sweeney, the Corps' chief economist in its St. Louis office, stated that the trust fund is already under so much financial strain that no new projects for the improvement of barge capacity can be considered until 2010.

The plan from the waterways trust fund users board would change the definition for projects requiring trust fund financing to only those construction projects that last over two years and result in extending lock life by 25 years. All other smaller scope work would fall under the sole funding responsibility of the Corps of Engineers.

While the Corps may eventually agree to reclassify its funding guidelines to match those of the waterway industry, it would continue to oppose any work that would increase river traffic capacity before it is able to complete renovations to selected locks and dams.

The Corps would also be forced to ask Congress for increased operational budget funding in order to cover the additional costs of the new work, which could run into many millions of dollars. 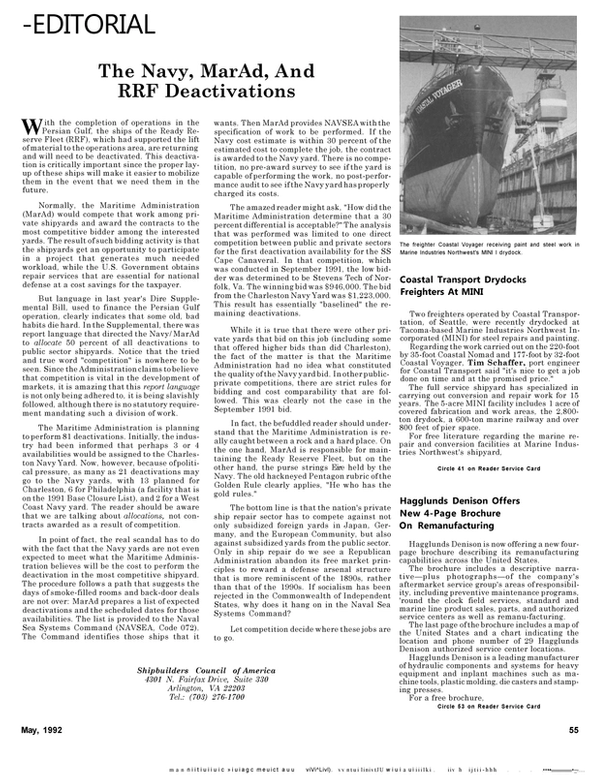 Read Corps Of Engineers Asked To Fund More Renovations On Inland Waterways in Pdf, Flash or Html5 edition of May 1992 Maritime Reporter