Over 500 Attend Ceremonies For Viking Maritec-Designed Boats The second and third of a series of three Viking 2000 Class towboats built by the Boat Division of Avondale Industries, Inc., were recently christened in ceremonies on the Ohio River at Paducah, Ky.

The two vessels are already in service barging mixed cargoes on the Mississippi and other inland waters.

The first of the class, the Karen K., is being operated by the Stokes Towing Company, Inc., Greenville, Miss.

More than 500 people were in attendance at the dual christening, which was presided over by John P.

Built at a cost of about $7 million each, the Cindy Celeste and the Elizabeth Dewey, along with their sister Karen K, were designed by Viking Maritec, Inc., Oakdale, Pa., an affiliate of the Vectura Group of companies. Viking Maritec, which holds all the design and proprietary rights of Dravo Marine Equipment Co., has constructed over 8,000 hulls, about 5,000 of which are still in service.

Mr. Verona said of the two new towboats, "They are everything we thought they'd be on paper. They were well-designed and engineered by Viking. They have exceeded our expectations." Propulsion for the twin-screw Viking 2000 Class towboats is supplied by a pair of Caterpillar 3612 diesels, rated at 6,800 hp at 900 rpm. The twin Cats drive two kort nozzled five-blade variable-pitch stainless steel propellers via Reintjes WAV 4450 marine gears. Karl Senner, Inc., New Orleans, supplied the Reintjes reverse reduction gears with internal hydraulic propeller shaft brakes and two Rexroth pneumatic remote control systems.

A unique feature of the Viking 2000 Class is its vibration isolated upperdeck and pilothouse, which offers the crew a more comfortable ride and reduces stress on sensitive communication and navigation systems. 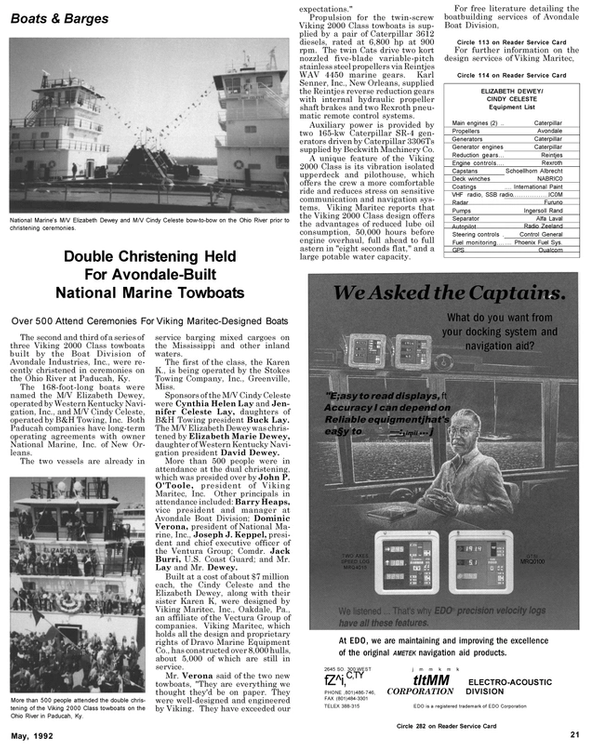